Woman dies 2 years after she was set on fire by ex, who may now face murder charge 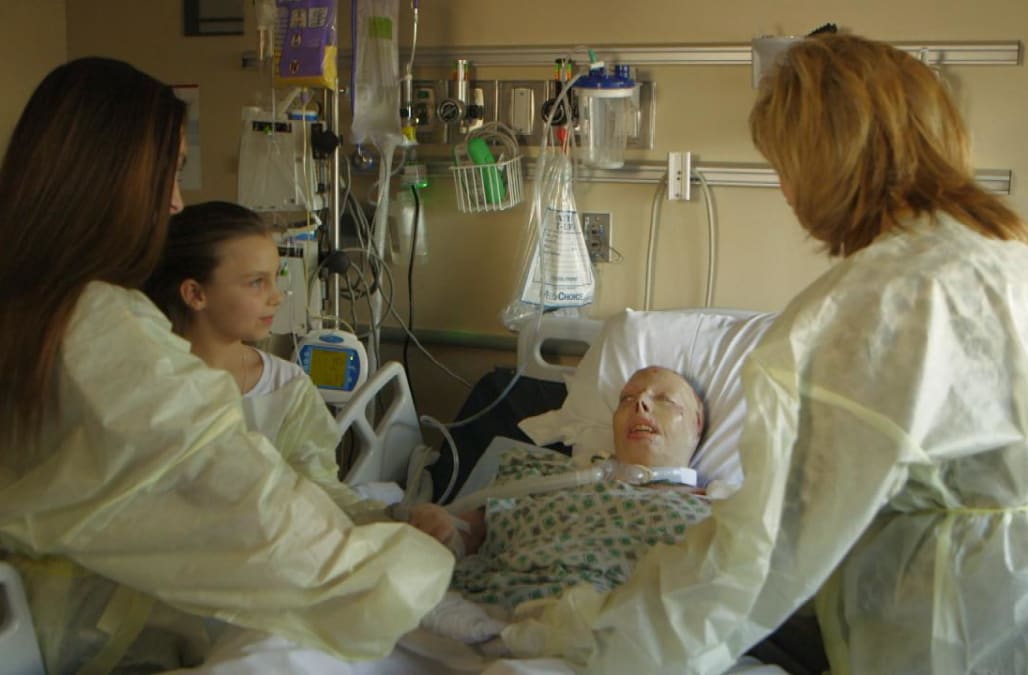 An Ohio woman who suffered horrific burns across her entire body when her ex-boyfriend doused her in gasoline and set her on fire has died from her injuries, two years after the vicious attack.

Judy Malinowski, 33, died Tuesday after fighting to hold on for her two daughters, countless other loved ones and to see changes made to the law that allowed her attacker to get just 11 years in prison, her family said.

"Nearly 23 months ago, a very evil man set our daughter on fire," her mother and father wrote on Facebook. "She gave it her all, for herself, her kids, her sister and brothers, her friends, her grandmother, aunts, uncles, cousins and her parents... Today was the day the good Lord took her from us. I know, she will be watching over us with that vibrant smile and personality. I pray, her story got out and will save lives."

Malinowski was outside of a Gahanna gas station on August 2, 2015, when Michael Slager, her ex-boyfriend, drenched her in gasoline and set her on fire.

Though Slager maintained that the fire was an accident and a result of his trying to light a cigarette, investigators said security cameras showed him dousing her in fuel before lighting the fire.

A witness who called 911 said Slager and Malinowski had been arguing before she was covered in flames and that Slager tried putting out the fire.

Slager pleaded no contest to felony assault, aggravated arson and possession of criminal tools and was sentenced to 11 years in prison — the maximum sentence he could receive.

Malinowski was left fighting for her life, suffering burns on 90 percent of her body.

Read: Children Must Wear Gowns And Gloves To Visit Burned Mom In Hospital

She endured 59 surgeries, but doctors could not repair wounds on her back or buttocks because she was unable to lie on her stomach.

She also lost the ability to walk, lost both of her ears and parts of her fingers, which had melted off in the fire, and suffered extensive damage to her trachea, making it impossible for her to speak above a whisper.

Malinowski remained hospitalized until May, when she was moved to palliative care unit.

"It's destroyed my life, my family's life, my kids' life," she said with the help of a speaking valve.

Her comments came as she pushed for a change in the law — named Judy's Law — that impose tougher prison sentences for attacks that permanently disfigure or disable, WBNS-TV reported.

After she was no longer able to speak, Malinowski's 13-year-old daughter spoke on her behalf.

"While we stand here today, my mom lies in a hospital bed, where she has been for 689 days," Kaylyn Malinowski said in her testimony to the Ohio Senate Judiciary Committee last Tuesday. "She has been in a lot of pain, and every day is a fight to stay alive. The man who hurt her took away a lot from my family. He took away my mom. He took away my grandma's time, and most of all, he took away the most precious and gorgeous person everyone knew.

This Tuesday, Judy's Law, formally known as Sub H.B. 63, unanimously passed the Senate Judiciary Committee and is now headed to the Senate floor for a vote as soon as Wednesday.

If it passes, the bill will head to Gov. John Kasich for his signature into law.

"If the medical experts state that proximate cause to the arson, injuries, and death exist, the case would go forward with or without her deposition, which was sought to rebut Slager's suggestion that the ignition was accidental and not intentional," a statement from O'Brien's office said.

In January, Malinowski recorded a sealed deposition that could be used as evidence in a trial should Slager be charged with murder, officials said.