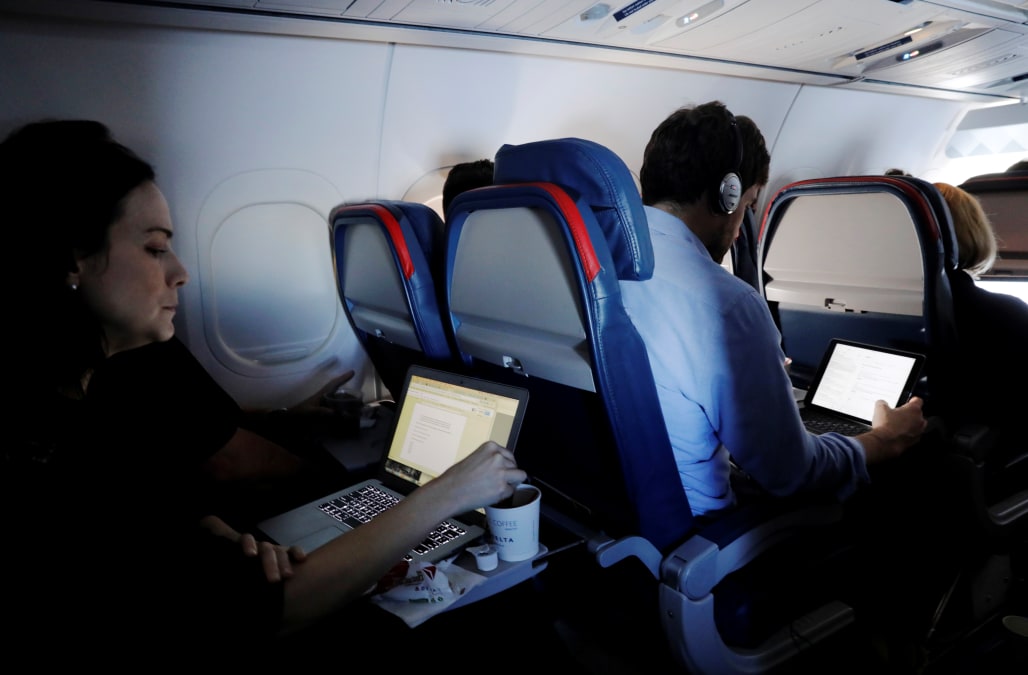 "Inaction is not an option," Kelly said, saying he believes airlines will comply with the new screening. But he said the measures are not the last step to tighten security.

U.S. officials are requiring enhanced screening of personal electronic devices, passengers and explosive detection for the roughly 2,000 commercial flights arriving daily in the United States from 280 airports in 105 countries.

The decision not to impose new restrictions on laptops is a boost to U.S. airlines, which have worried that an expansion of the ban to Europe or other locations could cause significant logistical problems and deter some travel. Airlines that failed to satisfy new security requirements could still face future in-cabin electronics restrictions, Kelly said.

European and U.S. officials told Reuters that airlines have 21 days to put in place increased explosive screening and have 120 days to comply with other security measures, including enhanced screening of airline passengers.

Since laptops are widely used in flight by business class passengers - who pay double or more than the average ticket price - the airline industry had feared expanding the ban could cut into revenue.

Airline officials told Reuters they are concerned about adding new enhanced security measures to all airports worldwide that have direct flights to the United States rather than focus them on airports where threats are highest.

European airline groups said in a document reviewed by Reuters that if the threats are confirmed, the restrictions should be deployed to cover all EU departing flights, not just U.S.-bound flights.

The United States imposed restrictions on laptops in March on flights originating at 10 airports in eight countries, including Egypt, Saudi Arabia, Kuwait, Qatar and Turkey. They came amid fears that a concealed bomb could be installed in electronic devices taken aboard aircraft. Britain quickly followed suit with a similar set of restrictions.

Homeland security officials said Wednesday that those 10 airports can get off the list if they meet the new security requirements.

U.S. airline stocks were higher on Wednesday, with United Continental Holdings up 0.9 percent, Delta Air Lines Inc up 1.9 percent and American Airlines Group up 1.5 percent. None of the airlines immediately commented.

Starting in April, Kelly repeatedly said it was "likely" the laptop ban would expand to other airports - and even said in May the government could potentially expand the ban worldwide.

Kelly said he planned a "step by step" security enhancement plan that included short, medium-term and longer-term improvements that would take at least a year to implement fully.

Robert Mann, analyst at R.W. Mann & Co, said if U.S. officials had insisted on a expanded laptop ban, it could harm business travel.

One big issue facing policymakers was the potential safety implications related to past problems with laptop batteries and storing large numbers of laptops in the cargo hold. (Reporting by David Shepardson; Additional reporting by Alana Wise in New York and Julia Fioretti in Brussels; Editing by Steve Orlofsky and Dan Grebler)

More from AOL.com:
TSA considers forcing you to take books out of your carry-on luggage
Woman feared for son's life after he passed out on hot airplane: 'The worst moment of my life'
New mom says TSA officers dumped her breast milk at Denver airport