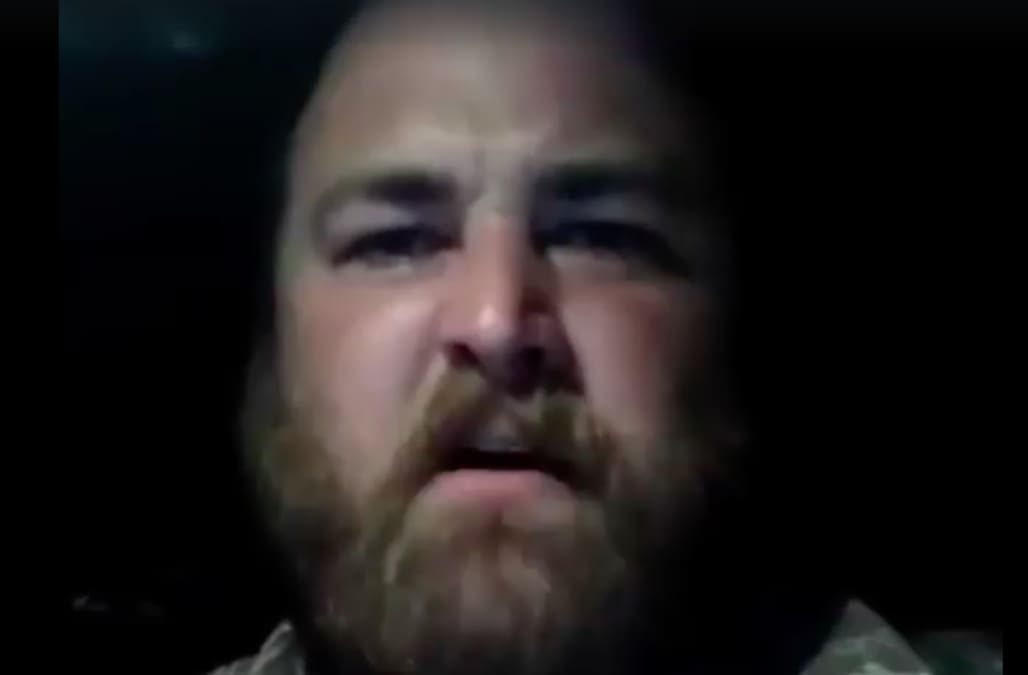 LITTLE ROCK, Ark., June 28 (Reuters) - A newly installed Ten Commandments monument on Arkansas state Capitol grounds was toppled on Wednesday by a man police said drove his vehicle into the granite slab and posted the incident on Facebook.

"It was shattered into a lot of pieces," Chris Powell, a spokesman for the Secretary of State and Capitol Police, said in an interview.

The suspect, identified as Michael Reed, 32, was arrested on three charges, including a felony of defacing an object of public interest. Police did not release Reed's motive for destroying the monument installed in Little Rock on Tuesday.

A Facebook Live video posted to the account of a person named Michael Reed appears to show the slab's destruction.

In the vehicle, a person can be heard saying: "Oh my goodness. Freedom," and driving more than 20 mph (32 kph) until a smashing noise is heard.

"He actually was videoing it and broadcasting it live on Facebook as it happened," police spokesman Powell said. He said an officer patrolling nearby arrested Reed.

No lawyer was listed for the suspect in online jail records.

In 2014, a person with the same name and age as the suspect used a vehicle to smash a Ten Commandments monument on Oklahoma Capitol grounds, law enforcement in Oklahoma said.

Religious monuments around the United States
A Ten Commandants monument is seen in a fenced-off section of Oklahoma State Capitol grounds in Oklahoma City, Oklahoma, September 30, 2015. The Republican Party of Oklahoma has offered a home to a Ten Commandments monument soon to be removed from Capitol grounds for violating state law, saying its teaching are espoused by the party, officials said on Thursday. Picture taken September 30, 2015. REUTERS/Jon Herskovitz
The Christ of the Ozarks statue is seen in Eureka Springs, Arkansas, in this undated handout photo courtesy of the Arkansas Department of Parks and Tourism. For decades, visitors from around the world descended on the small Ozark mountain hamlet of Eureka Springs to see The Great Passion Play, the tale of Jesus Christ's last week on earth. The flashy play with a cast of hundreds, including live animals, was performed for 45 seasons in the shadow of the seven-story Christ of the Ozarks statue on Magnetic Mountain. REUTERS/Arkansas Department of Parks and Tourism/Handout (UNITED STATES - Tags: RELIGION SOCIETY) FOR EDITORIAL USE ONLY. NOT FOR SALE FOR MARKETING OR ADVERTISING CAMPAIGNS. THIS IMAGE HAS BEEN SUPPLIED BY A THIRD PARTY. IT IS DISTRIBUTED, EXACTLY AS RECEIVED BY REUTERS, AS A SERVICE TO CLIENTS
Historical marker at Fort Boonesborough regarding first official Christian service held in Kentucky in 1775. (Photo by: Education Images/UIG via Getty Images)
Cameron Reed of Wichita, Kansas and Linda Capabianco stand with a large replica of the Ten Commandments in front of the Georgia capitol in Atlanta, Georgia, September 29, 2003 as part of the "Spirit of Montgomery" protest to allow the Ten Commandments to remain in federal and state buildings across the country.The protests began after the removal of a monument of the Ten Commandments from the Alabama Judicial Building in Montgomery, Alabama. REUTERS/Tami Chappell TLC
The U.S. Supreme Court said on October 12, 2004 that it would decide whether displaying the Ten Commandments on government property, including at a state Capitol or a county courthouse, violated church-state separation. The justices agreed to resolve the issue after conflicting rulings by U.S. appeals courts around the country on whether displays of the Ten Commandments amounted to an impermissible government endorsement of religion under the First Amendment. File photo from August 27, 2003 shows workers preparing to remove a Ten Commandments monument from the Alabama Judicial Building in Montgomery, Alabama. REUTERS/Tami Chappell RC/SV
The Dalai Lama (C) sits on a stage during a ceremony at the largest Buddhist monument in the U.S., The Great Stupa of Dharmakaya, near Red Feather Lakes, Colorado, September 17, 2006. REUTERS/Rick Wilking (UNITED STATES)
Up Next

Reed then fled the scene and went into a federal building. He made threats against then President Barack Obama and spat on pictures in the lobby, they said.

Arkansas has not officially confirmed whether the same Reed was involved in Wednesday's incident, Powell said.

The 6-foot (1.8-meter) monument in Little Rock was funded with $26,000 in private donations. Legislation permitting it on the Capitol grounds was enacted in 2015, and whether that was appropriate has been debated ever since.

Courts have ordered the removal of similar religious monuments erected in Alabama and Oklahoma, which had rebuilt its monument after it was destroyed.

A civil liberties group has pledged a court challenge in Arkansas, saying the monument showed an unconstitutional government preference for a certain religion.

Since Arkansas' Ten Commandments monument act was proposed, satanists and other groups have also sought state permission to place markers on Capitol grounds, but their requests were rejected. (Reporting by Steve Barnes in Little Rock and Jon Herskovitz in Austin, Texas; Editing by Taylor Harris and Grant McCool)