'This thing was not a bear': Hunt for Bigfoot underway in Pennsylvania 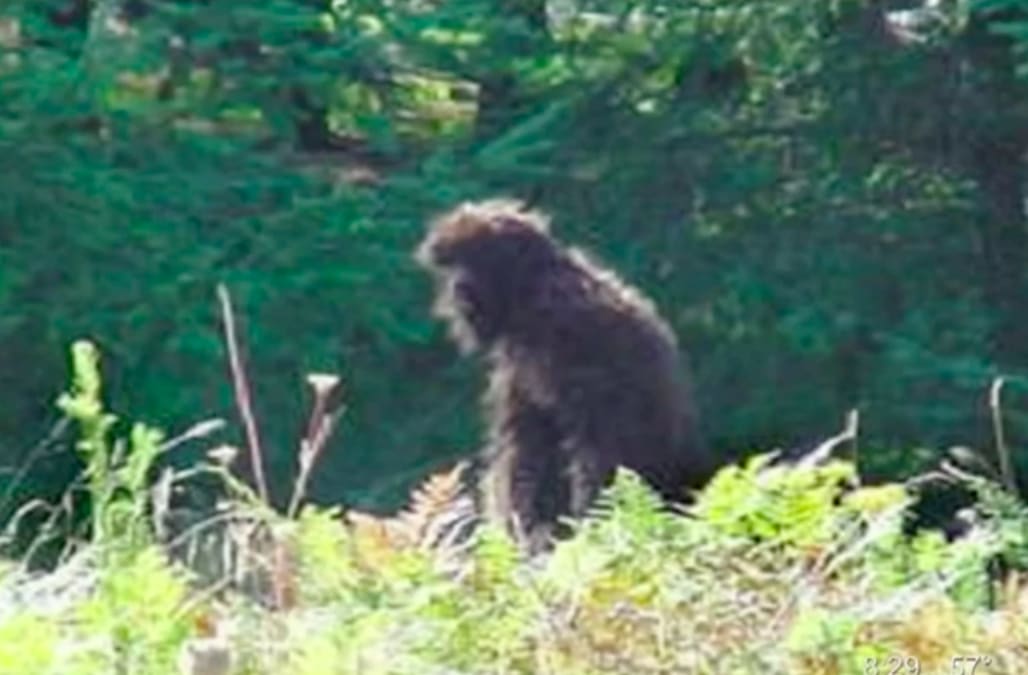 Is Sasquatch hiding out in the woods of western Pennsylvania?

According to the Pittsburgh Post-Gazette, a team of hunters from northern California seems to think so.

It all started when a couple from Crawford County in Pennsylvania contacted the "godfather" of all Bigfoot hunters to take a look at their property after finding what they believed to be mysterious footprints.

Keith and Robin Morgan live in a rural area of the county, where they say they saw a large, bizarre-looking creature walking across their farm covered in black fur last year.

A view of the Loch Ness Monster, near Inverness, Scotland, April 19, 1934. The photograph, one of two pictures known as the 'surgeon's photographs,' was allegedly taken by Colonel Robert Kenneth Wilson, though it was later exposed as a hoax by one of the participants, Chris Spurling, who, on his deathbed, revealed that the pictures were staged by himself, Marmaduke and Ian Wetherell, and Wilson. References to a monster in Loch Ness date back to St. Columba's biography in 565 AD. More than 1,000 people claim to have seen 'Nessie' and the area is, consequently, a popular tourist attraction.

Former Royal Air Force pilot Tom Dinsdale displays a model he made of the storied Loch Ness 'Monster.' Dinsdale claims he saw the 'monster' and even made movies of it when he was at Loch Ness, Scotland, last April 23rd. He said he shot fifteen feet of film at a distance of about one mile showing the monster swimming and diving, in the waters of Loch Ness. The film was shown on television June 13th. Dinsdale said he thought the monster could be a type of large reptile, possibly an evolved form of Pleiosaur, an aquatic dinosaur that existed more than 60 million years ago.

VANCOUVER, CANADA
A series of 3 plaster casts taken from footprints suspected to have been made by a bigfoot in Vancouver, Canada. Never-before seen pictures show new evidence that the legendary Bigfoot exists and that they could build nests. Two pictures were snapped last month when experts on the creature - also known as the Sasquatch - came together for the first time in Russia. Dr John Bindernagel, 69 from Canada, was one of several world-renowned bigfoot experts invited to the week-long conference in Russia. He and others from the USA and Sweden met with their Russian counterparts to join forces and share evidence for the first time. During a two-day expedition through to the Kemerovo region of Siberia, wildlife biologist Dr Nindernagel and other members of the team examined two trees apparently twisted out of shape. The area is well known for sightings of the 'Wildman' - the Russian name for Bigfoot. Dr Nindernagel, who has studied Bigfoot for 40 years and has penned two books on the creature, said the trees corroborated with a new and emerging theory from North America that the Bigfoot might build nests using branches like orangutans and gorillas. Other pictures show evidence gathered by Dr Bindernagel over the years.

Vintage engraving of The Kraken, as Seen by the Eye of Imagination, 19th Century. The Kraken is a legendary sea monster of large proportions that is said to dwell off the coasts of Norway and Greenland.

Roman frieze showing centaur, mythological creature with the head, arms, and torso of a human and the body and legs of a horse.

(Photo by: Arterra/UIG via Getty Images)

Claiming to have seen a creature far more massive than a bear, the couple called in the help of Carmine Biscardi, or "The Godfather of Bigfoot," as he identifies himself.

Biscardi, who has spent 50 years of his life searching for the legendary creature, reviewed the couple's initial reports and visited the area earlier this week to conduct a more in-depth investigation.

"Me and the team are responding [sic]. We are going to be checking the whole area out. We got a lot of property to look at," Biscardi's son, T.J. Biscardi, told KDKA. "This is one of the pens where the creature was actually...they had to move the hogs out of here because something was coming in, climbing over the fence, killing the hogs and taking them out."

The team, which consists of three generations of Biscardi men, is using thermal-image camera and setting up bait to hopefully get concrete proof that Bigfoot exists once and for all.

To capture the creature, the family says they're suspending peanut butter and sardines from high up in tree, at a height that is allegedly within their target's height.

The Biscardis reportedly follow up on nearly 30 tips and reports a day to get closer to finding Bigfoot. They're also offering $1 million to anyone with information leading to its capture.