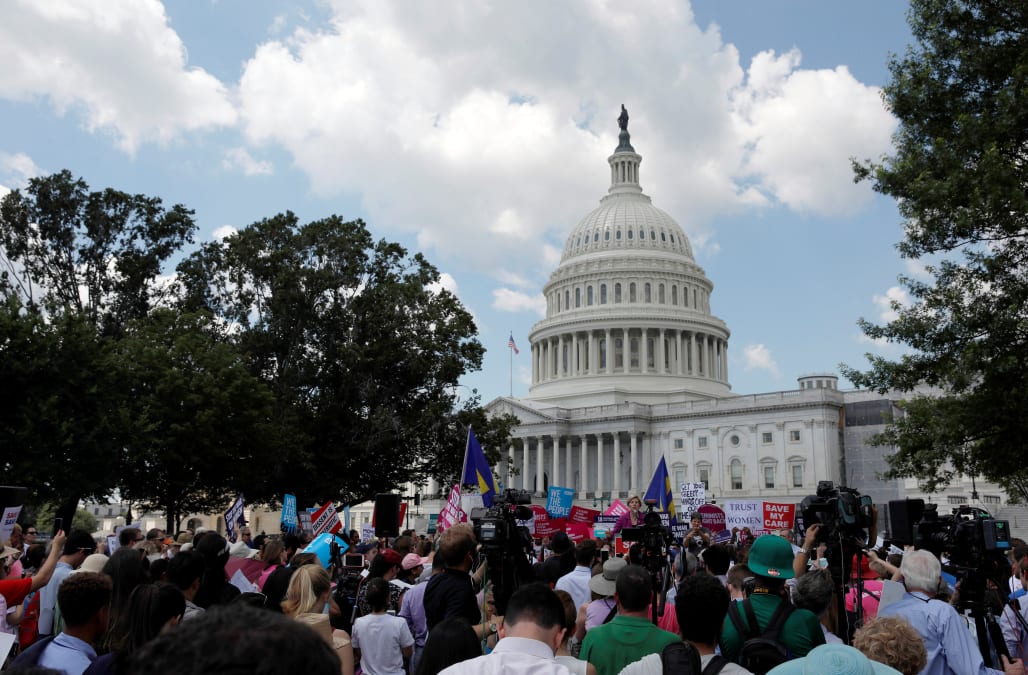 Forty economists, six of whom are Nobel laureates, have joined the growing number of those opposed to the Senate health care bill.

Collectively, they sent a letter on Monday asking the Senate to rethink its legislation.

"The Senate bill would reduce assistance for the millions of people who buy coverage through the...marketplaces. Many now eligible for tax credits would be denied them entirely. States would be allowed to opt out of regulations that allow less healthy people to buy insurance at reasonable rates," the economists wrote.

Twitter reacts to CBO of American Healthcare Act
Today, the CBO confirmed what we already knew. The Republican health care plan is a disgrace. https://t.co/W8WF39K5kj
CBO report confirms it → American Health Care Act will lower premiums & improve access to quality, affordable care.… https://t.co/AOJjaiQ8Ki
CBO makes clear #Trumpcare will cause serious harm to millions of American families. This should be a looming stop sign for the GOP.
Statement from House Budget Committee Chairman @RepDianeBlack on CBO Score https://t.co/xroQNflQfV https://t.co/j6GUu7xr8q
Chairman @repgregwalden's statement on @USCBO's score of the American Health Care Act >> https://t.co/efhyox1jgk
CBO report on GOP health plan: -24 MILLION fewer insured -$880 billion cut from Medicaid -Premiums 20% higher by 2018 Is this "winning?"
CBO estimate confirms: #Trumpcare is dead on arrival&I will do all that I can to ensure its defeat
FYI, House GOP handpicked the CBO director. Their own guy is the one saying the bill is a humanitarian catastrophe waiting to happen.
The CBO warns us at least 14 million Americans will lose their insurance by 2018 under the GOP health care plan
Plan where 24M people lose health care shouldn't be called a "health care plan" Should be called "a plan to take away people's heath care"
Kicking 24 million people off health care to finance a huge tax cut for the wealthy does not seem like a winning populist message
According to CBO, a 64-year-old with income of $26,500 pays $1,700 for ACA coverage. Under Ryan bill: $14,600. More than half their income.
In recent days, GOP began saying its plan's goal was not necessarily to cover everyone, but to cut costs. CBO now confirms it does neither
Trump vocally promised not to cut Medicaid. The CBO says that his plan amounts to a 25% cut to Medicaid by 2026.
Hot public policy take: a plan that takes Healthcare access away from a population the size of Canada sounds bad. #AHCA #CBO
A 64-year-old making $26,500 a year could see a ***758%*** increase in their premiums ($14,600 yr vs $1700), plus much higher copays: CBO🚨
Up Next

The letter further notes, "We call on Congress to work on legislation to improve the health delivery system, in general, and The Affordable Care Act, in particular."

The American Medical Association expresses similar concerns and suggestions, stating, "We sincerely hope that the Senate will take this opportunity to change the course of the current debate and work to fix problems with the current system. We believe that Congress should be working to increase the number of Americans with access to quality, affordable health insurance instead of pursuing policies that have the opposite effect..."

Other groups that have spoken out against the Senate plan include the American Cancer Society and the United States Conference of Catholic Bishops, notes the New York Times.

Meanwhile, Senate Majority Leader Mitch McConnell is continuing to push for a vote on the bill this week.

On Monday, the nonpartisan Congressional Budget Office or CBO released the estimated impact of the Senate health care plan, noting, "The Senate bill would increase the number of people who are uninsured by 22 million in 2026 relative to the number under current law..."