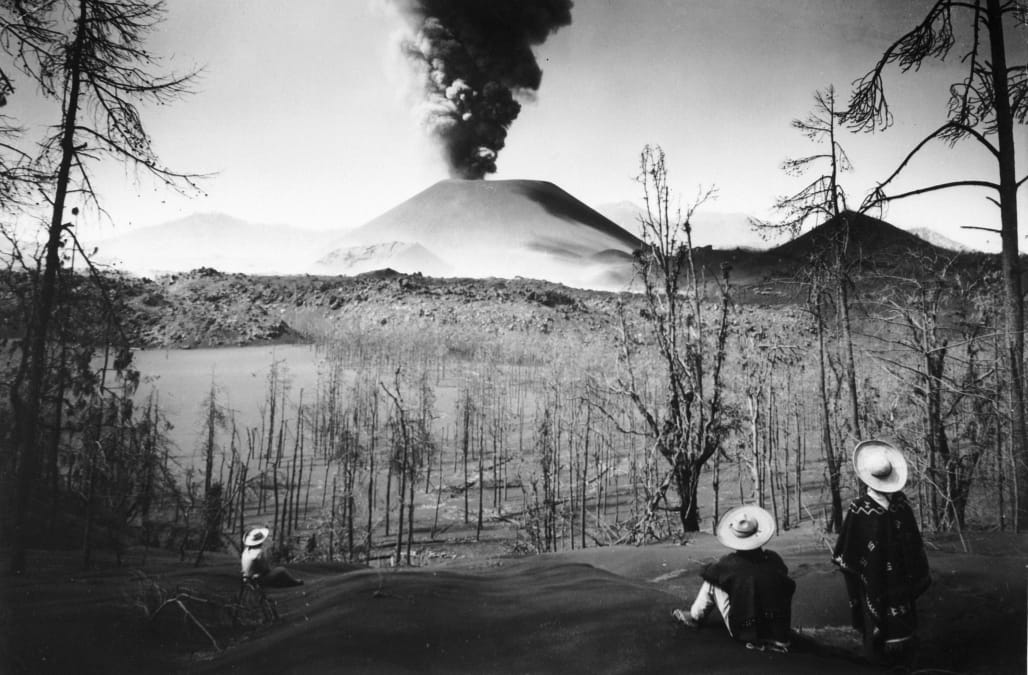 For Dionisio Pulido and his family, Feb. 20, 1943 began as an average day of clearing and burning shrubbery from their cornfields near the village of Parícutin, Mexico to prepare for the spring sowing.

Later that afternoon, as Pulido moved to a different field to continue his work, he stumbled upon a small hill that had suddenly appeared. Atop the hill was a shallow crack, six feet wide and 150 feet long.

A number of small tremors had been felt over the previous few days, so Pulido was puzzled but not particularly concerned. He returned to the task of clearing brush.

11 PHOTOS
Paricutin: The volcano that erupted out of a cornfield
See Gallery

Then a sound like thunder rolled through the earth. Pulido spun around to see that the hill had lurched upward to a height of more than six feet and was belching gray ash into the air.

"Immediately more smoke began to rise with a hiss or whistle, loud and continuous; and there was a smell of sulfur." Dionisio Pulido, Farmer

Terrified, Pulido fled the field and ran for his family. They were nowhere to be found.

As the rumbling continued, Pulido jumped on his horse and rode to the village, where he found his family safe and unharmed.

"When night began to fall, we heard noises like the surge of the sea, and red flames of fire rose into the darkened sky, some rising 800 meters or more into the air, that burst like golden marigolds, and a rain like artificial fire fell to the ground." Celedonio Gutierrez

24 hours after Pulido discovered the crack in his field, a furious volcano towered 165 feet over his property, spraying ash and molten rock and continuing to grow.

The newborn volcano was a part of the Trans-Mexican Volcanic Belt, a 600-mile stretch of extinct volcanoes and smaller cinder cones. The volcanic soil deposits and moist Pacific breezes made it an exceptionally fertile planting ground for farmers like Pulido.

As the volcano continued to rise higher and higher above Parícutin, scientists began to arrive, excited by the unprecedented opportunity to study the lifecycle of a scoria cone volcano from the beginning.

Tons of ash fell from the sky, smothering vegetation and piling in dunes and drifts.

In June 1943, lava began to flow from the volcano's slopes, necessitating the evacuation of the village.

The molten rock crept over the village and continued on, slowly devouring the town of San Juan, leaving only the church bell tower to loom over a craggy black plain.

The volcano continued to rumble and grow in its first year of life. 200 miles away, ash fell on Mexico City.

As time passed, however, its activity slowed. Eruptions became sporadic amid long periods of silence. In 1952, it finally went dormant, topping out at nearly 1,300 feet above the surrounding valley.

Thousands of people were displaced by the eruption and forced to rebuild their lives elsewhere.

Before leaving for the last time, Pulido returned to what was once his cornfield and planted a sign: "This volcano is owned and operated by Dionisio Pulido."

More from AOL.com:
US state with the worst air quality in the country revealed
Why a closed bedroom door could save your life in a fire
Global Seed Vault gets upgrade after flooding scare