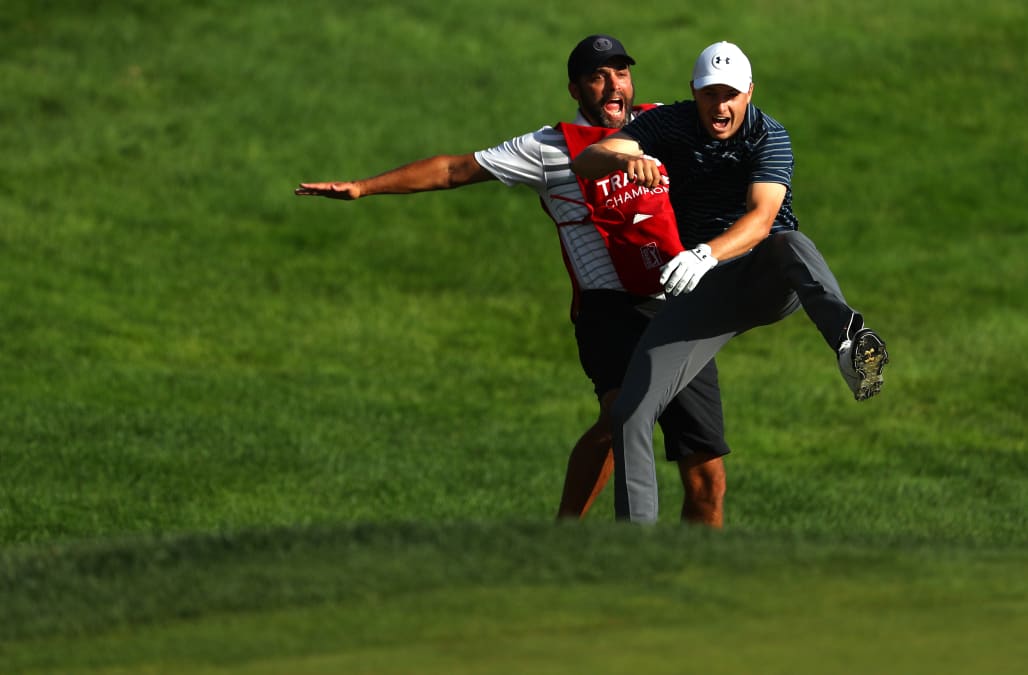 June 25 (Reuters) - Jordan Spieth holed a bunker shot to win the Travelers Championship in a playoff on Sunday and become the second youngest player in the modern era behind Tiger Woods to post 10 PGA Tour victories.

In a finale that would have done Woods proud, Spieth sank his 60-foot sand shot at the first extra hole for birdie to edge fellow American Daniel Berger at TPC River Highlands.

The precise execution enabled Spieth to overcome a back nine meltdown in which he putted poorly and almost allowed fast-finishing Berger to steal victory.

Spieth carded a closing 70 to Berger's 67, the pair finishing at 12-under-par 268, two strokes ahead of compatriot Charley Hoffman and New Zealander Danny Lee.

"For the bunker shot to go in, that was awesome. I don't know if I'll ever have a moment like that again," an excited Spieth said in a greenside interview after clinching his 10th victory at the age of 23 years, 10 months and 29 days.

Woods was the youngest since detailed records began in 1983 to reach 10 victories. He was 23 years, six months and four days when he posted the milestone.

A flair for the dramatic is nothing new for Spieth, who also holed a bunker shot for his first victory at the 2013 John Deere Classic.

"It's incredible. It feels like we've been out here for a long time but it's only been four years," he said.

"At least this one had good speed going in. I've always taken some crap from my peers about the John Deere one potentially going off the green or in the water.

"I feel very fortunate to play golf for a living. That was my dream growing up. To live for these moments and produce moments like that, I feel very lucky, very blessed."

The former world number one did not feel so blessed after missing two putts from inside four feet on the back nine to almost fritter away what had looked like being a comfortable victory. He then struck a tree with his drive in the playoff, only to get a fortuitous bounce.

"It was a battle," he said. "That putter let me down a little for most of the round. I felt more comfortable in the bunker than from four feet (and) I got really lucky to hit the tree and have it go in the fairway."

The playoff loss deprived 24-year-old Berger of a second victory in three starts, having won the St. Jude Classic two weeks ago.

"I played great today so I'm not going to be too upset," said Berger, who sportingly gave Spieth a thumbs-up gesture when his rival holed the winning bunker shot.