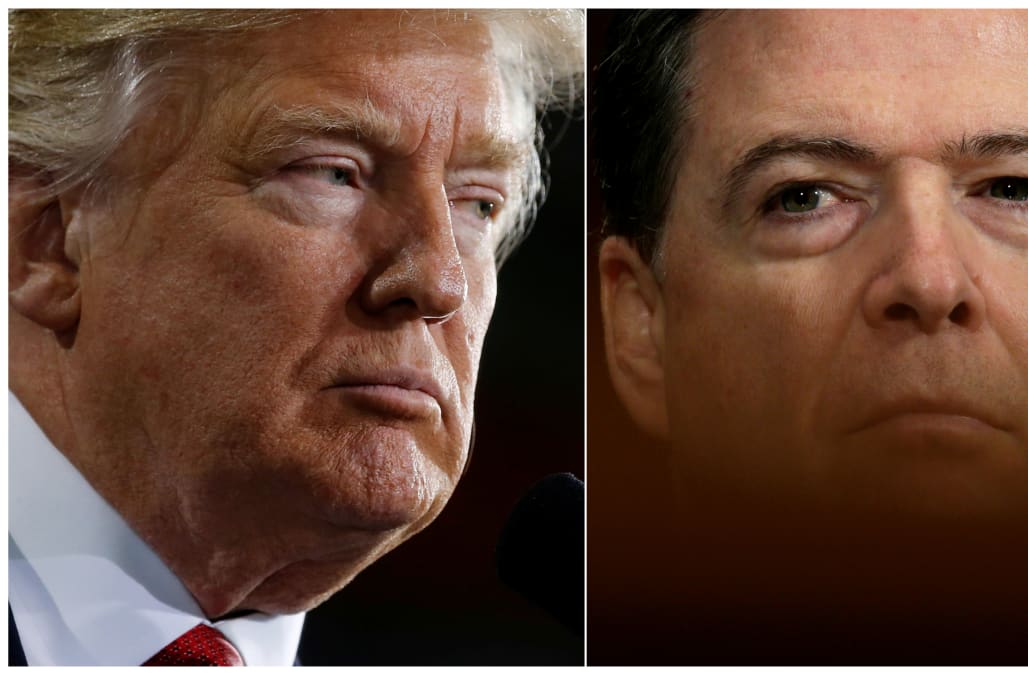 By a 2-to-1 margin, Americans say they are more likely to believe former FBI Director James Comey than President Donald Trump when it comes to their differing accounts of events that led up to Comey's firing, according to the latest NBC News/Wall Street Journal poll. By party, 76 percent of Democrats side with Comey, while 50 percent of Republicans believe Trump. Independents break for Comey over Trump, 47 percent to 17 percent.

The NBC/WSJ poll also finds 46 percent of Americans disapproving of Trump's decision to fire Comey — up from 38 percent in May.

President Trump fired Comey on May 9, and the Trump administration initially said it was because of how he handled the Hillary Clinton email investigation during the 2016 election.

But Trump later suggested it was due to the FBI's investigation into Russia's interference in the election — and whether Trump's 2016 campaign might have had contacts with Russian entities.

"When I decided to [fire Comey], I said to myself, I said you know, this Russia thing with Trump and Russia is a made up story," Trump told NBC's Lester Holt two days after Comey's dismissal.

Comey testified to the Senate Intelligence Committee on June 8 that the president asked Comey to let go of the investigation into former Trump National Security Adviser Michael Flynn. Trump and his personal attorney have denied he ever said that.

According to the NBC/WSJ poll, 53 percent of Americans believe that Russia's government interfered in the 2016 election, compared with 36 percent who disagree.

But this breaks along partisan lines: 78 percent of Democrats and 53 percent of independents think Russia interfered, versus just 26 percent of Republicans. More from NBC news:
Amid Controversy, Trump’s Approval Remains Low But Steady
The Many Foreign Policies of Donald Trump
Advisers Don’t Want Trump Talking About Russia. But He Is