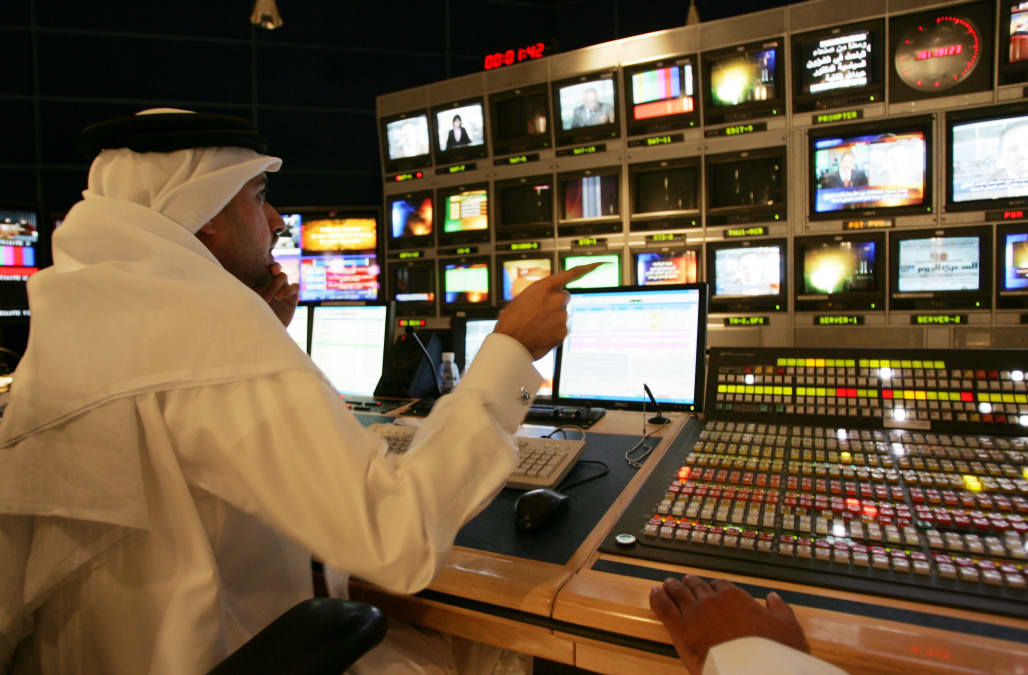 DUBAI, June 23 (Reuters) - Four Arab states boycotting Qatar over alleged support for terrorism have sent Doha a list of 13 demands including closing Al Jazeera television and reducing ties to their regional adversary Iran, an official of one of the four countries said.

The demands aimed at ending the worst Gulf Arab crisis in years appear designed to quash a two decade-old foreign policy in which Qatar has punched well above its weight, striding the stage as a peace broker, often in conflicts in Muslim lands.

Doha's independent-minded approach, including a dovish line on Iran and support for Islamist groups, in particular the Muslim Brotherhood, has incensed some of its neighbors who see political Islamism as a threat to their dynastic rule.

The list, compiled by Saudi Arabia, the United Arab Emirates (UAE), Egypt and Bahrain, which cut economic, diplomatic and travel ties to Doha on June 5, also demands the closing of a Turkish military base in Qatar, the official told Reuters.

Turkey's Defence Minister Fikri Isik rejected the demand, saying any call for the base to be shut would represent interference in Ankara's relations with Doha. He suggested instead that Turkey might bolster its presence.

"Strengthening the Turkish base would be a positive step in terms of the Gulf's security," he said. "Re-evaluating the base agreement with Qatar is not on our agenda."

Qatar must also announce it is severing ties with terrorist, ideological and sectarian organizations including the Muslim Brotherhood, Islamic State, al Qaeda, Hezbollah, and Jabhat Fateh al Sham, formerly al Qaeda's branch in Syria, the Arab official said, and surrender all designated terrorists on its territory.

Qatari officials did not reply immediately to requests for comment. But on Monday, Foreign Minister Sheikh Mohammed bin Abdulrahman al-Thani said Qatar would not negotiate with the four states unless they lifted their measures against Doha.

RELATED: Countries that have cut ties with Qatar

The countries give Doha 10 days to comply, failing which the list becomes "void," the official said without elaborating, suggesting the offer to end the dispute in return for the 13 steps would no longer be on the table.

"The demands are so aggressive that it makes it close to impossible to currently see a resolution of that conflict," said Olivier Jakob, a strategist at Switzerland-based oil consultancy Petromatrix.

Several Qataris who spoke to Reuters described the demands as unreasonable. "Imagine another country demanding that CNN be closed," said 40-year-old Haseeb Mansour, who works for telecom operator Ooredoo.

Abdullah al-Muhanadi, a retired public sector shopping for groceries in Doha on Friday morning, said the boycott must be lifted before negotiations to resolve the dispute could start.

"There's a lot on the list that is simply not true or unreasonable, so how can we comply?" he said. "There are no IRGC (Iranian Revolutionary Guard Corps) elements in Qatar and the agreement with Turkey is a long-standing diplomatic agreement so we cannot ask them to leave."

The demands, handed to Qatar by mediator Kuwait also require that Qatar stop interfering in the four countries' domestic and foreign affairs and stop a practice of giving Qatari nationality to citizens of the four countries, said the official, who spoke on condition of anonymity.

Qatar must pay reparations to these countries for any damage or costs incurred over the past few years because of Qatari policies, he added. Any resulting agreement to comply with the demands will be monitored, with monthly reports in the first year, then every three months the next year, then annually for 10 years, the official said without elaborating.

U.S. President Donald Trump has taken a tough stance on Qatar, accusing it of being a "high level" sponsor of terrorism, but he has also offered help to the parties in the dispute to resolve their differences.

Turkey has backed Qatar during the three-week-old crisis. It sent its first ship carrying food aid to Qatar and dispatched a small contingent of soldiers and armored vehicles there on Thursday, while President Tayyip Erdogan spoke with Saudi Arabia's leaders on calming tension in the region. (Additional reporting by Tom Finn and Tom Arnold in Doha, and Daren Butler in Istanbul; Editing by Rania El Gamal, Paul Tait and Richard Balmforth)