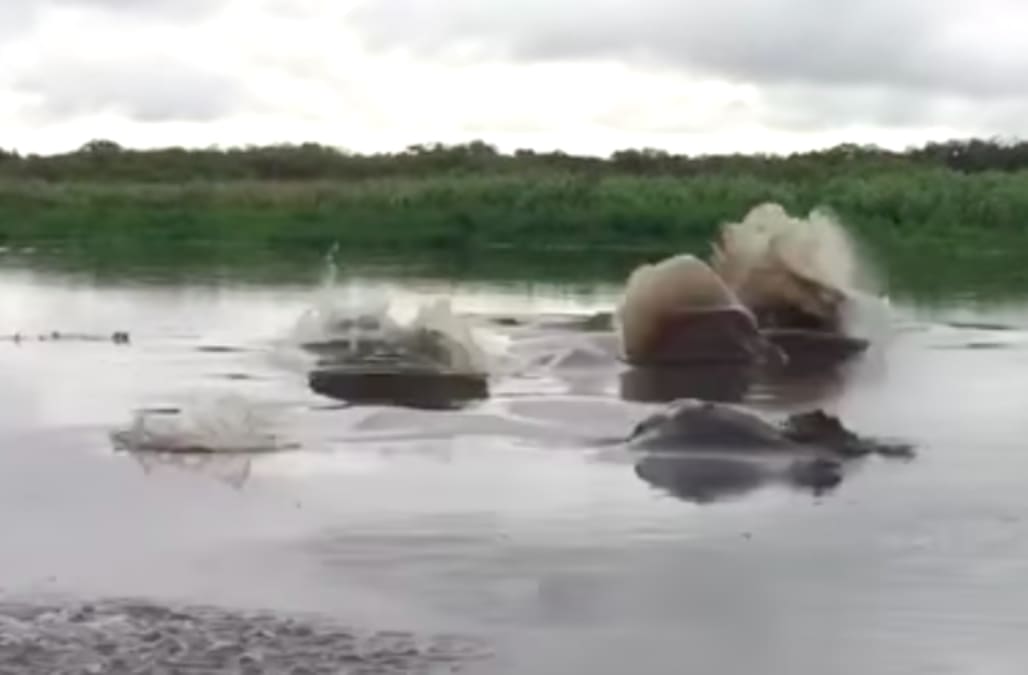 A viral video of a river erupting after a man threw a bucket of water into it is stirring controversy after some viewers deduced that the "mystery creatures" he provoked were actually manatees.

Maria McCormick shared a video on Facebook on June 16, showing her husband, Scott McCormick, bailing out their boat after a storm on the St. Johns River in Volusia County, Florida.

As a smiling Scott tosses the bucket's contents onto the still body of water, the placid river appears to erupt from underneath the surface in a rather terrifying fashion.

"My husband was bailing water out of our boat after a huge storm. Every time he threw the water we saw splashes in the water," McCormick wrote alongside her original video. "I happened to be recording on one of the tosses and we saw HUGE splashes of water everywhere. We both looked at each other and said "I will NEVER swim in there again!"'

According to WFTV, the viral video began to rack up thousands of negative comments from viewers who recognized the creatures behind the massive splashes as manatees and claimed the couple was guilty of disturbing them in their natural habitat.

Manatees are protected in Florida by both state and federal law, underneath the Marine Mammal Protection Act of 1972 and the Endangered Species Act of 1973, according to SaveTheManatee.org.

Pretty soon, the Florida Fish and Wildlife Conservation Commission was made aware of McCormick's inflammatory video.

A representative from the commission told WFTV on Tuesday that they are currently investigating the incident.

If the McCormicks are found to be in violation of state law protecting manatees, they may face up to 60 days in prison and a $500 fine.

Federal penalties for breaking the same laws can include up to a year in prison and a $50,000 fine.