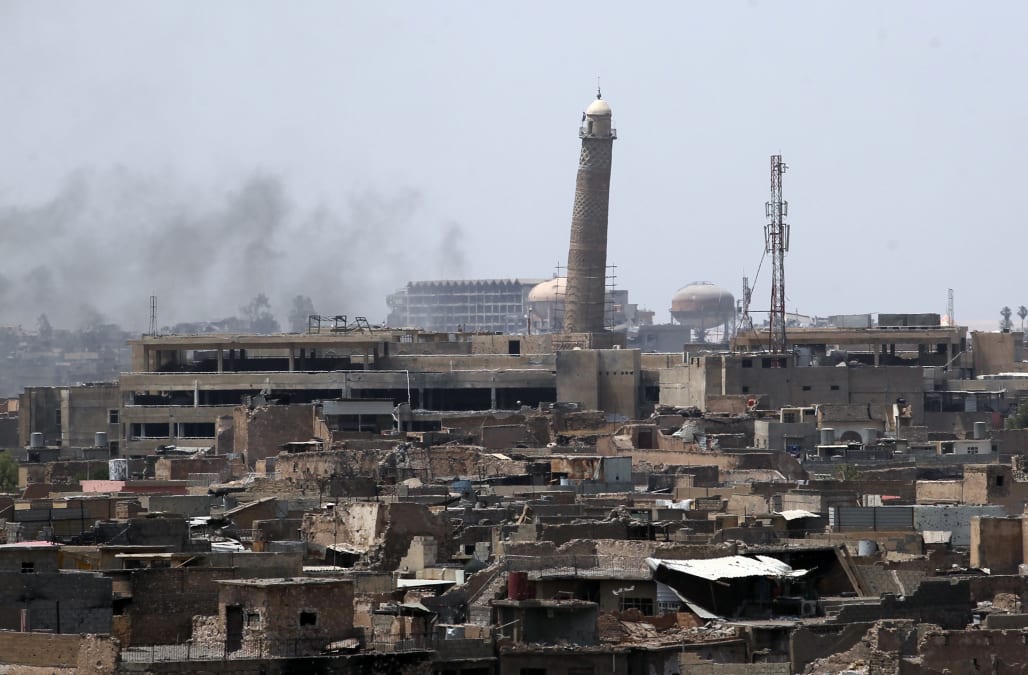 MOSUL/ERBIL, Iraq, June 21 (Reuters) - Islamic State militants on Wednesday blew up the Grand al-Nuri Mosque of Mosul and its famous leaning minaret, Iraq's military said in a statement, as Iraqi forces seeking to expel the group from the city closed in on the site.

It was from this medieval mosque three years ago that the militants' leader Abu Bakr al-Baghdadi declared a self-styled "caliphate" spanning parts of Syria and Iraq.

''Blowing up the al-Hadba minaret and the al-Nuri mosque amounts to an official acknowledgement of defeat,'' Iraqi Prime Minister said in a brief comment on his website.

The Iraqis called the 150-foot (45-meter) leaning minaret Al-Hadba, or "the hunchback." Baghdadi's black flag had flown over it since June 2014.

"We did not strike in that area," coalition spokesman U.S. Air Force Colonel John Dorrian told Reuters by telephone.

"The responsibility of this devastation is laid firmly at the doorstep of ISIS," U.S. Army Major General Joseph Martin, commander of the coalition's ground component, said in a statement, using an acronym for Islamic State.

The media office for Iraq's military distributed a picture taken from the air that appeared to show the mosque and minaret largely flattened and reduced to rubble among the small houses of the Old City, the historic district where the militants are under siege.

The mosque was destroyed as Iraq's elite Counter Terrorism Service (CTS) units, which have been battling their way through Mosul's Old City, got within 50 meters (164 feet) of it, according to an Iraqi military statement.

"This is a crime against the people of Mosul and all of Iraq, and is an example of why this brutal organization must be annihilated," said U.S. Major General Martin.

Iraqi forces said earlier on Wednesday that they had started a push toward the mosque.

''This will not prevent us from removing them, no, killing them not removing them, inside the Old City,'' Lieutenant General Abdul Ghani al-Assadi, senior CTS commander in Mosul, said in a video posted over a messaging app.

The forces on Tuesday had encircled the jihadist group's stronghold in the Old City, the last district under Islamic State control in Mosul.

Baghdadi proclaimed himself "caliph," or ruler of all Muslims, from the mosque's pulpit on July 4, 2014, after the insurgents overran vast swathes of Iraq and Syria.

Baghdadi's speech from the mosque was the first time he revealed himself to the world, and the footage broadcast then is to this day the only video recording of him as "caliph."

Iraqi officials had privately expressed hope that the mosque could be retaken in time for Eid al-Fitr, the festival marking the end of Ramadan, the Muslim month of fasting. The first day of the Eid falls this year on June 25 or 26 in Iraq.

"The battle for the liberation of Mosul is not yet complete, and we remain focused on supporting the Iraqi Security Forces with that objective in mind," said Martin.

The fall of Mosul would, in effect, mark the end of the Iraqi half of the "caliphate," even though Islamic State would still control territory west and south of the city, the largest over which they held sway in both Iraq and Syria.

Baghdadi has left the fighting in Mosul to local commanders and is believed to be hiding in the border area between Iraq and Syria, according to U.S. and Iraqi military sources.

The mosque was named after Nuruddin al-Zanki, a noble who fought the early crusaders from a fiefdom that covered territory in modern-day Turkey, Syria and Iraq. It was built in 1172-73, shortly before his death, and housed an Islamic school.

By the time renowned medieval traveler and scholar Ibn Battuta visited two centuries later, the minaret was leaning. The tilt gave the landmark its popular name: the hunchback.

It was built with seven bands of decorative brickwork in complex geometric patterns also found in Persia and Central Asia.

Nabeel Nouriddin, a historian and archaeologist specializing in Mosul and its Nineveh region, said the minaret had not been renovated since 1970, making it particularly vulnerable to blasts even if it was not directly hit.

The Mosque's destruction occurred during the holiest period of the Islamic holy month of Ramadan, its final 10 days. The night of Laylat al-Qadr falls during this period, marking when Muslims believe the Quran was revealed to prophet Mohammed. Islamic State fighters have destroyed many Muslim religious sites, churches and shrines, as well as ancient Assyrian and Roman-era sites in Iraq and in Syria. The group posted videos online in 2015 showing the destruction of artifacts in the Mosul museum, some of which dated from the 7th century BC. It is also suspected of selling artifacts. (additional reporting by Ahmed Rasheed in Baghdad and Phil Stewart in Washington; writing by Maher Chmaytelli; Editing by Jonathan Oatis, Toni Reinhold)