Some Democrats are starting to turn their ire toward Nancy Pelosi 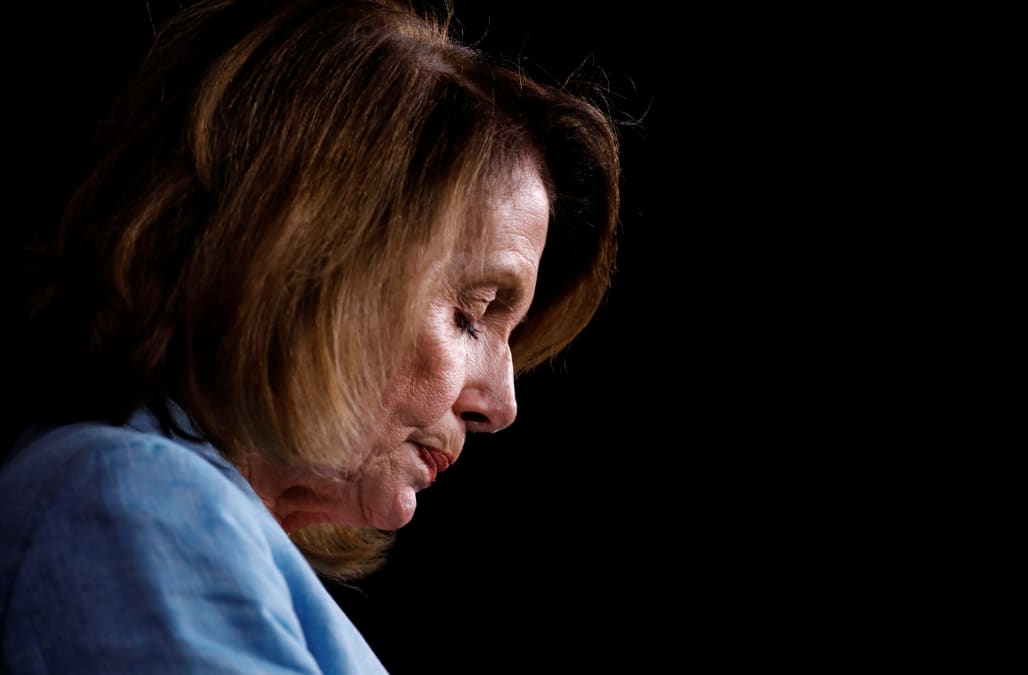 House Minority Leader Nancy Pelosi may have never set foot in Georgia's 6th Congressional District during the special election on Tuesday, but some Democrats wonder if her reputation there cost them a winnable race.

Following Democrat Jon Ossoff's loss in the race to fill the seat vacated by Department of Health and Human Services head Tom Price, many Democrats have worried that their opportunity to ride Trump's historic unpopularity to a wave election cycle in 2018 could be squandered by Republicans' effective ability to link any Democratic candidate with the unpopular Pelosi.

Democratic Rep. Tim Ryan, who unsuccessfully challenged Pelosi for minority leader, said he did not know how Democrats could win in 2018 if Republicans are effectively able to convince independents and Republicans that a vote for a Democrat is a vote for Pelosi's agenda.

"I don't know if there is a solution in the short term," Ryan said. "It's clear that tactic still works, still packs a punch, and it's part of a broader toxicity of being part of the Democratic brand regardless of where you are."

Other Democrats were even more blunt.

"I think you'd have to be an idiot to think we could win the House with Pelosi at the top," Rep. Filemon Vela told Politico. "Nancy Pelosi is not the only reason that Ossoff lost. But she certainly is one of the reasons."

While demonization of Pelosi has been a staple of congressional races for years — in 2010, Republicans drove a bus around the country for the "Fire Pelosi 2010" tour — Democrats were particularly concerned by Republicans' ability to effectively blunt Ossoff's favorability by invoking Pelosi at every possible turn.

In a relentless war on the airwaves that made the election the most expensive House election in history, Republican Karen Handel and Republican groups tied Ossoff to Pelosi at every opportunity.

The Congressional Leadership Fund super PAC paid for a car to drive around in the district with Ossoff's and Pelosi's faces and a sign that said "San Francisco <3 Jon Ossoff," while Pelosi was a feature on campaign fliers and mailers sent to voters in the district.

"It had a motivating effect for our voters on the turnout front," Rogers said. "It remains to be seen how widespread Nancy Pelosi becomes as a messaging point for the fall of next year. I think it was effective here."

Data showed that Pelosi had 98% recognition in the district and was unpopular among 58% of the districts voters. When faced with a choice of whether voters wanted a representative to work with the minority leader or House Speaker Paul Ryan, six out of ten voters chose Ryan, while only three out of ten chose Pelosi.

Some Democrats in 2018 are already distancing themselves from the minority leader.

The Democratic Party needs new leadership now. If elected, I will not vote for Nancy Pelosi for speaker. Time to move forward and win again.

Pelosi's status as a longtime leader of the Democratic Party has often made her specifically the target of criticism among Republicans and some more progressive Democrats.

Some Democrats feel Republicans have effectively caricatured her as a leader who's out-of-touch with the concerns of regular Americans.

And part of the opposition to Pelosi likely has ugly gendered undertones.

The Daily Beast's Matt Lewis argued on Wednesday that part of Pelosi's toxicity was her status as a "liberal woman of a certain age."

"It's politically incorrect to admit this, but it seems that in much of the county, whether we're talking Hillary or Pelosi, they come across as hectoring," Lewis wrote. "What is more, this stereotype plays into policy concerns about the nanny state,' etc."

"We can label this visceral dislike of them 'sexist' if we want, but it seems to be that a lot of men and women alike are repelled by their style. To be sure, it is dangerous for me (as a dude) to note this, but it seems to be an observable phenomenon that liberals would do best not to ignore."

Pelosi herself has argued that the ads have undermined Republicans' calls for political civility, particularly in the wake of a shooting earlier this month that wounded Rep. Steve Scalise and several staffers.

"Probably as we sit here, they're running caricatures of me in Georgia once again, earned over a hundred million dollars of vitriolic things that they say, that resulted in calls to my home constantly, threats in front of my grandchildren," Pelosi said last week.

Many Democrats have dismissed criticism of Pelosi, noting that criticism of her often neglects to mention her effectiveness as a leader in passing key legislation.

"Nancy Pelosi's probably the best House leader that Democrats have had since and maybe even before Tip O'Neil," Rodell Mollineau, the co-founder of the consulting firm Rokk Solutions, said. "She's been able to keep Democrats together on issues when she's in the minority and when she's in the majority. ... The fact that she is a great House leader is why Republicans spend so much time trying to knock her down."

And for her part, the minority leader has argued that many of the negative impressions that Republicans have of her are equally true of Ryan among Democratic voters.

"Republicans blew through millions to keep a ruby red seat and in their desperate rush to keep stop the hemorrhaging, they've returned to demonizing the party's strongest fund-raiser and consensus builder," Drew Hammill, Pelosi's deputy chief of staff, told the New York Times. "They don't have Clinton or Obama so this is what they do."

Other Democrats rejected the argument that Tuesday's loss meant the party did not have a chance to retake the House in 2018.

In a widely-shared memo, the Democratic Congressional Campaign Committee shared data which suggested Trump remained incredibly unpopular in a number of contested districts.

"I don't make this statement lightly – I've never said it before," DCCC chairman Ben Ray Lujan said. "I know the road back to a Democratic House majority will be long and hard. It necessitates fielding strong candidates with diverse profiles that fit unique Republican-leaning districts. It demands that we continue embracing a big tent mentality, listening to the voices of everyday Americans and articulating a positive vision for our future. It demands that we build the best team possible and train the next generation of campaign staff."