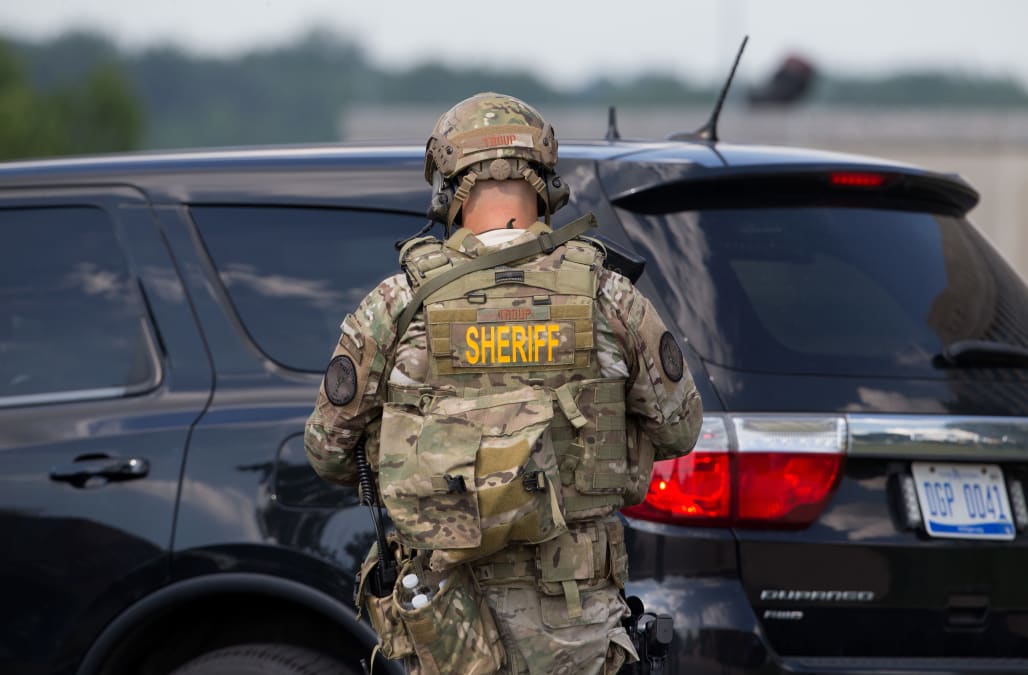 June 21 (Reuters) - Bishop International Airport in Flint, Michigan, was evacuated on Wednesday after a police officer was stabbed in the neck in what a U.S. government official familiar with the situation said was being investigated as a possible act of terrorism.

All passengers were safe, the airport said in a brief statement on its Facebook page. The officer who was stabbed is Lieutenant Jeff Neville of the Bishop International Airport Department of Public Safety, Michigan State Police spokeswoman Lori Dougovito said by telephone.

NBC News: Federal investigators are looking into the stabbing of a police officer at the Flint, MI airport as a possible act of terrorism.

Neville underwent surgery after the attack and is stable, Dougovito said. Asked if the stabbing was under investigation as possible terrorism, the government official, who asked not be named, said "yes."

The officer was stabbed inside the airport's main terminal, Michigan State Police spokesman David Kaiser said in a telephone interview from the airport.

"We are aware of reports that the attacker made statements immediately prior to or while attacking the officer, but it is too early to determine the nature of these alleged statements or whether or not this was an act of terrorism," the Federal Bureau of Investigation's Detroit field office said in a statement.

RELATED: 15 best airports in the world

15 best airports in the world

Why it's awesome: Copenhagen is one of the busiest hubs in northern Europe and is a major base of operations for Scandinavian Airlines and Norwegian Air Shuttle.

Skytrax reviewers lauded the airport for its clear and well-placed signs and the efficient, though sometimes crowded, facilities.

Why it's awesome: Narita is the first of the two Tokyo airports to appear on the list. Located 35 miles outside of Japanese capital, Narita handles most of the international traffic going in and out of the city. The airport serves as a major hub for ANA, Japan Airlines, Delta, and United.

Why it's great: Vancouver takes home the prize as the top-ranked airport in North America for the eighth year in a row, and for good reason. Customer reviewers on Skytrax cited YVR's friendly staff, high level of organization, and easy access to downtown Vancouver as some of the best things about the airport.

Vancouver International also boasts a floatplane terminal, as well as a sizable collection of art from the Pacific Northwest.

Why it's awesome: Located on an artificial island in the Osaka Bay, Kansai International is a major hub for ANA and Japan Airlines.

Why it's awesome: Amsterdam's Schiphol Airport is one of the busiest airports in Europe and serves as a hub for KLM, Transavia, and Delta.

Opened in 1916, Schiphol is noted for its wide variety of leisure activities and has a library in which fliers can cozy up with a good book while waiting for their flights.

Why it's awesome: Frankfurt Airport is the fourth-busiest airport in Europe and one of the most important transit hubs in the world. FRA is home base to Lufthansa's fleet of more than 270 jets.

Skytrax reviewers praised the airport for the ease of transit between terminals and the abundant shopping and dining options. Some, however, have complained of lengthy lines at immigration.

Why it's awesome: Heathrow is the world's third-busiest airport and the largest of the five primary airports serving London.

Heathrow is in the midst of a major renovation with the addition of a new Terminal 2 building. It's eight-year-old Terminal 5 building was named the best airport terminal in the world by Skytrax.

Heathrow serves as the main hub for British Airways and Virgin Atlantic.

Why it's awesome: Just 8 miles from the heart of Zurich, the airport serves as the home for Swiss International Air Lines and as a hub linking Switzerland's largest city with the rest of the country.

For passengers with an extended layover, Zurich Airport offers bicycle and inline-skate rentals and excursions to the Swiss Museum of Transport Lucerne.

Why it's awesome: Built on an artificial island in the middle of Ise Bay near the city of Nagoya, Central Japan International — also known as Centrair — is a focus city for Japan Airlines and ANA.

Centrair holds the distinction as the best regional airport in the world.

It has a 1,000-foot sky deck, where passengers can watch ships sail into the Port of Nagoya. There's also a traditional Japanese bathhouse, where you can have a relaxing soak while watching the sunset over the bay.

Why it's awesome: Hamad International opened for business in 2014 and is now home to Qatar Airways.

The airport and its two terminals sit on 5,400 acres of land and cost $16 billion to construct. Skytrax describes the facility as the "the most architecturally significant terminal complex in the world, as well as being the most luxurious."

Why it's awesome: Built on an artificial island off the coast of Hong Kong, HKG has become one of the most popular facilities in the world since it opened in 1998.

One of the busiest airports in Asia, Hong Kong International serves as the home to Cathay Pacific, Hong Kong Airlines, and Dragonair.

Be sure to play around at the SkyCity Nine Eagles golf course near Terminal 2.

Why it's awesome: Located northeast of downtown Munich, MUC is one of the busiest airports in Europe and the second-busiest in Germany, after Frankfurt.

Munich serves as a major hub for Air Berlin, Lufthansa, and Condor, and it features airy, glass-heavy architecture. A nearby visitors park features mini golf and a display of historic aircraft.

Why it's awesome: Incheon maintains its place as once of the world's elite airports with a third-place finish. Located on an island just outside of the South Korean capital, Incheon is home base to Korean Air and is the 24th-busiest airport in the world. It opened in 2001.

Incheon's highly regarded facilities feature an array of shopping and dining options, in addition to a bevy of cultural performances. The airport even has a Korean culture museum.

Why it's awesome: Haneda is one of two major international airports that serve the Tokyo area. Located a few miles from the heart of the Japanese capital, Haneda has proved to be a popular port of entry for business travelers and tourists.

The world's fifth-busiest airport, Haneda is known for its service efficiency, cleanliness, and shopping.

Why it's awesome: For the fifth year in a row, Changi takes the crown as the world's best airport. Changi serves as home to Singapore Airlines, Silkair, and Tigerair, and it's the 16th-busiest airport in the world.

The Singaporean airport has received praise from flyers for its beautiful architecture, efficient operation, luxurious amenities, and dining and shopping options.

Flyers passing through are treated to movie theaters, a multimedia entertainment deck, spas, and a wild corkscrew slide.

Police have taken a "person of interest" into custody, Flint Mayor Karen Weaver said in a statement. Officials increased security at Flint City Hall, including additional police officers, in "an abundance of caution," the statement said.

Bishop Airport is a small regional airport with two runways that has, on average, 16 commercial flights arriving or departing each day, according to FlightAware, a flight tracking service.

The airport warned of potential cancellations and delays after the incident.

More from AOL.com:
Otto Warmbier's father says son was tricked into visiting the country
US moves long-range rocket launchers into southern Syria
New study finds the most dangerous cities in each US state