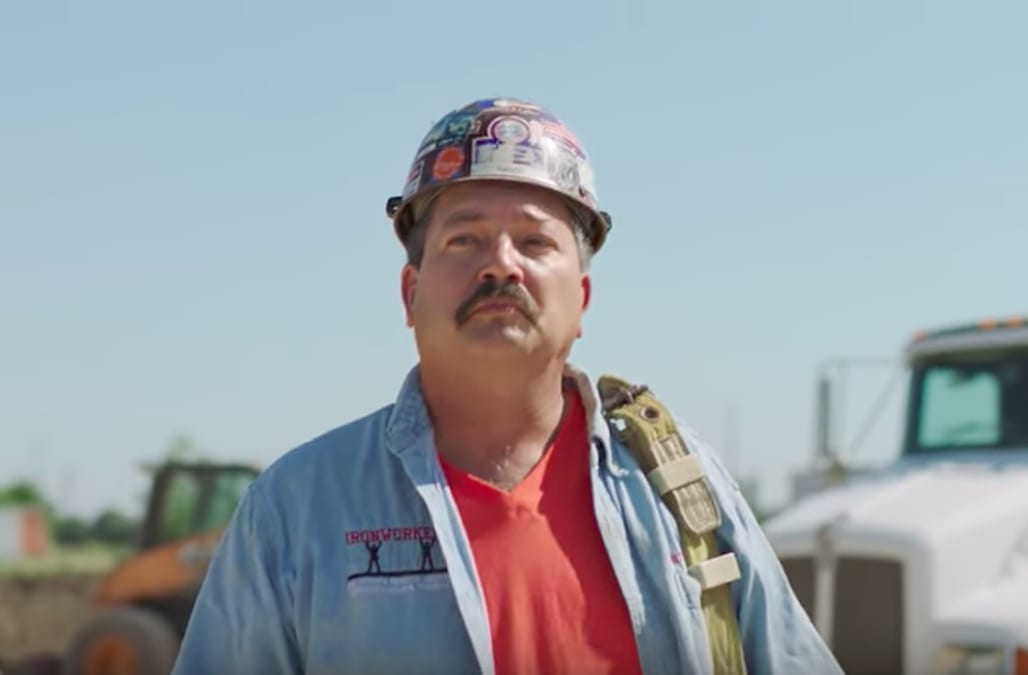 Southeastern Wisconsin native Randy Bryce says he's running for office because not everybody is seated at the table, and "it's time to make a bigger table."

Bryce recently announced his bid to run for Congress in Wisconsin's 1st District come 2018 -- a House seat currently held by Republican Speaker Paul Ryan. With the Twitter handle "@IronStache" and Ron Swanson vibes to boot, the Democrat iron worker says every American deserves "a good-paying job, health care security, and the ability to have hard work pay off."

The campaign ad focuses on health care with a personal look at Bryce's mother who suffers from multiple sclerosis.

"My mother has multiple sclerosis, my father is in assisted living, and I survived cancer in my 20s to have a miracle child in my 40s," said Bryce. "What Paul Ryan and the Republicans are doing to take health care away from millions of us, to make it cost more and cover less, and to allow the protections we've gained to be stripped away – it's just unacceptable."

According to Bryce's campaign page, the Democratic candidate is an Army veteran, cancer survivor and union ironworker.

"I work hard and earn every penny that I make," Bryce says in his campaign ad published last Sunday. "I could do so much more, and I will do so much taking my voice to Washington D.C."

Paul Ryan on Tuesday doubled down on his promise to overhaul the U.S. tax code by the end of 2017, despite party divides on Capitol Hill.

"Let's trade places," Bryce says. "Paul Ryan you can come and work the iron. And I'll go to DC."

Social media naturally exploded over Bryce's Twitter handle, with one person even joking that the congressional candidate was "genetically engineered from Bruce Springsteen songs."

Social media goes nuts over Randy Bryce's campaign announcement
guys there is a union ironworker running against Paul Ryan oh my goodness https://t.co/ZpNgOVcIQ4
if I were running Randy Bryce’s campaign I’d make him do a photoshoot dressed up in Paul Ryan workout gear except doing ironworker shit
"Let's trade places. Paul Ryan you can come and work the iron. And I'll go to DC." Watch this whole thing. https://t.co/ONJS58plhn
A union iron worker & cancer survivor, @IronStache, is challenging Paul Ryan, w/ focus on healthcare. His first ad. https://t.co/pTwOjj8pxH
Paul Ryan vs. Randy Bryce Four first names enter Two first names leave
Proud to call @IronStache, who's now running vs. Paul Ryan in 2018, a friend. The most important House race. LEGGO! https://t.co/2atlCBOTVT
Randy Bryce is running against @SpeakerRyan in 2018. He was genetically engineered from Bruce Springsteen songs. https://t.co/XD9bOEeOkl
HELL YES! Very excited & relieved that someone this awesome (Randy Bryce @IronStache) is finally challenging Paul R… https://t.co/6EIOyg3Y2V
@timjhogan @bluemassgroup @IronStache So many reasons to support Randy Bryce, but is it wrong if I do it because hi… https://t.co/NA6mwQlIB2
I don't know how much of a chance Randy Bryce has against Paul Ryan in WI-1, but this is an amazing ad. https://t.co/4fUTfrE04j
Lyin' Ryan is looking more and more vulnerable. Randy Bryce, it's time to throw your hardhat in, Brother! #wiunion
@SpiritsAngels @jasonmdstein @IronStache @SpeakerRyan Randy Bryce @IronStache sounds like a good guy who would be a… https://t.co/krDMkDKC0z
Better yet, his Twitter handle is @ironstache, which is amazing on multiple levels. https://t.co/W9tZ8kEnAh
@JoyAnnReid @CitizensFedUp @IronStache Damn that ad takes your breath away...@ironstache is the real deal
With @IronStache running, a union man who will stand up for working families, I will move heaven and earth to get him elected.
@JebBoone @erictheteamster @chelseahandler @IronStache that's the best line in an ad in a LONG time! @SpeakerRyan w… https://t.co/eoTYUXCq9S
Dude's Twitter name is @IronStache ... how he could possibly lose is beyond me. https://t.co/onbKxBCY99
Up Next