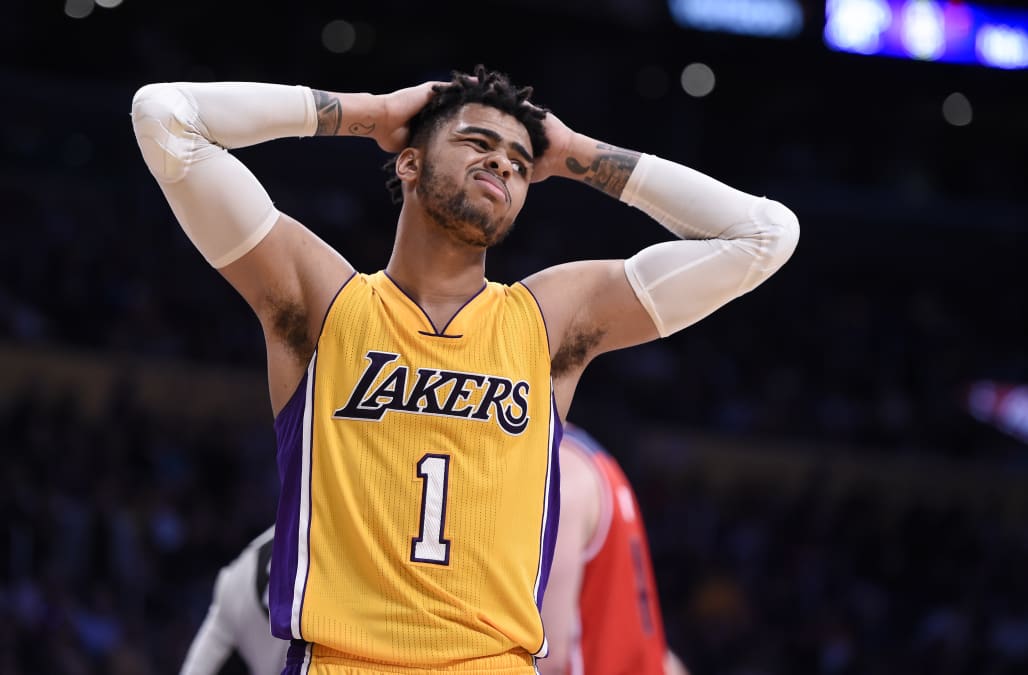 The Los Angeles Lakers and Brooklyn Nets have completed the NBA's second big offseason trade prior to Thursday's draft, according to Yahoo's Adrian Wojnarowski.

According to Wojnarowski, the Lakers are sending D'Angelo Russell and Timofey Mozgov to the Nets for Brook Lopez and the 27th pick in the draft.

The deal looks like an immediate win for the Nets, who pick up an intriguing young prospect in Russell while taking on Mozgov's salary, but it may also hint at bigger aspirations for the Lakers.

At 32 years old, LeBron James is still the NBA's most dominant player and poised to lead the Cavaliers to another Finals appearance.

In 2003, James entered the league at 18 years old as a high-school phenom.

Manu Ginobili may be the oldest star of the NBA playoffs, coming off the bench for the Spurs at 39.

Ginobili came to the NBA at 25 years old in 2002 after a successful overseas career.

Kawhi Leonard has become the leader of these Spurs at 25 years old.

James Harden, 27, is trying to lead the Houston Rockets past the Spurs and into the Western Conference Finals.

Harden entered the NBA in 2009 at 20 years old and with significantly less beard.

Kyrie Irving, at 25, already owns a signature moment thanks to his big three-pointer in last year's Finals.

When he was drafted at 19 in 2011, before LeBron's return, the Cavs being in the Finals seemed impossible.

Kevin Love, 28, will play another big role in the Cavs' success this postseason.

Love entered the league in 2009 at 20 years old and a little more burly.

Gordon Hayward was a first-time All-Star this season at 27 and has led the Jazz to a strong playoff showing.

He's been one of the NBA's consistently steady risers since being drafted at 20 years old in 2010.

At 29, Stephen Curry is trying to help the Warriors make their third straight Finals.

He's come a long way from the skinny 21-year-old who entered the league in 2009.

Klay Thompson, 27, is now a key two-way player for the Warriors

People thought Thompson was strictly a sharpshooter when he entered the NBA at 21 in 2011.

Draymond Green, at 27, is considered the engine for the Warriors.

Kevin Durant is hoping to win his first title at 28.

Durant has been a thin, dynamic scorer since being drafted by the Seattle Supersonics at 18 years old in 2007.

Isaiah Thomas, at 28, is improbably carrying the Celtics through the playoffs.

When he was drafted with the last pick in 2011, at 22, nobody knew he could be a franchise star.

John Wall had an MVP-level season at 26 for the Wizards this year.

He's become even better than expected when he entered the NBA at 19 in 2010.

DeMar DeRozan has become the Raptors' go-to scorer at 27.

DeRozan was known mostly as a high-flying dunker when he came into the league at 20 years old in 2009.

Kyle Lowry made his third All-Star team with the Raptors at 30 years old this year.

Lowry began his winding career at 20 years old as a reserve for the Memphis Grizzlies.

J.R. Smith has become a vital sharpshooter and defender for the Cavs at 31.

Smith has come a long way from the immature gunner many considered him to be when he was a 19-year-old rookie in 2004.

Iman Shumpert, 26, is a three-and-D wing and fashionable member of the Cavs.

When he entered the league at 21 in 2011, he rocked a more straight-forward look.

(Photo by Jim McIsaac/Getty Images)
Up Next

By moving Russell, who was supposed to be the team's future guard, it appears the Lakers are zeroing in on Lonzo Ball with the second pick, as has been heavily rumored. Ball, during a workout with the Lakers, said he thinks he can run their offense and that they need leadership on the court, perhaps a subtle dig at Russell's relatively underwhelming tenure with the team.

Additionally, in trading Mozgov, the Lakers also clear up future cap space, as Mozgov is owed $48 million over the next three years. Lopez, meanwhile, is a free agent next year, owed $22 million this season. That means the Lakers will have cap space in 2018 when LeBron James is a free agent. Chatter of James leaving the Cavs for the Lakers in 2018 has been ramping up around the NBA.

Furthermore, the Lakers also picked up an additional draft pick in the trade, adding to their No. 2 overall pick and their 27th overall pick (via the Houston Rockets). In picking up a borderline All-Star center in Lopez and an additional draft pick, the Lakers could potentially be gearing up for a trade. The target may be Paul George, who reportedly recently informed the Indiana Pacers that he intended to leave in 2018 and join the Lakers, his hometown team.

It's unclear if the Lakers are willing to trade for George, but they may be up against the clock. The Pacers reportedly plan to move George quickly, and the Lakers could miss out if George is traded to a winning team and decides to re-sign with them in 2018.

Of course, if the Lakers are unable or unwilling to pull off a trade for George this season, they'll have the cap space to go after him in free agency in 2018.

What the Lakers may have up their sleeves is still relatively unknown, but in Tuesday's trade they dumped a valuable asset, gained another draft pick, and cleared up future cap space — moves that hint at a bigger plan.

More from Business Insider:
There is increasing buzz that the Lakers could pass on Lonzo Ball in the NBA Draft
The chatter about LeBron James leaving the Cavs for the Lakers is growing
Paul George reportedly told the Pacers he intends to leave in free agency, and it's going to put the Lakers in a dilemma the NBA has seen before