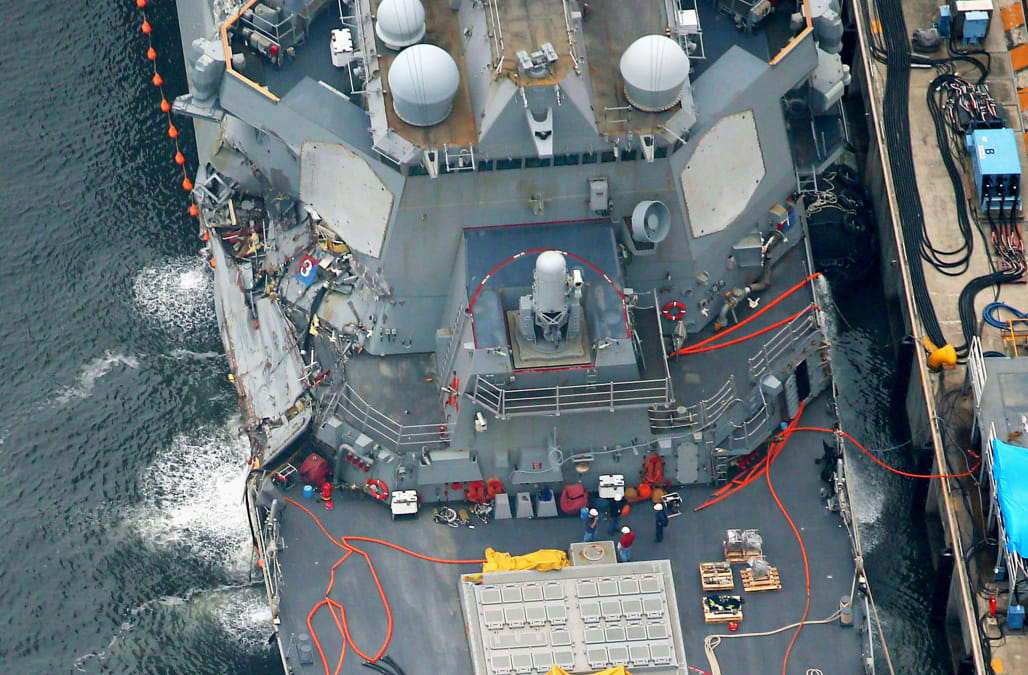 TOKYO, June 19 (Reuters) - Nearly an hour elapsed before a Philippine-flagged container ship reported a collision with a U.S. warship, the Japanese coastguard said on Monday, as investigations began into the accident in which seven U.S. sailors were killed.

The U.S. Navy confirmed that all seven missing sailors on the USS Fitzgerald were found dead in flooded berthing compartments after the destroyer's collision with the container ship off Japan early on Saturday.

The Fitzgerald and a Philippine-flagged container ship collided south of Tokyo Bay early on Saturday. The cause of the collision is not known.

Multiple U.S. and Japanese investigations are under way on how a ship as large as the container could collide with the smaller warship in clear weather.

The collision happened at around 1:30 a.m. but it was not until 2:25 a.m. that the container ship informed the Japanese coastguard of the accident, said coastguard spokesman Takeshi Aikawa told Reuters.

He declined to elaborate on why the ship took nearly an hour to report the accident but said it could take ships time to notify authorities as they dealt with more urgent matters.

Right after being notified of he accident by the container vessel, the Japanese coastguard made contact with the U.S. ship and confirmed it, Aikawa said.

A significant portion of the crew on the U.S. ship was asleep when the collision occurred, tearing a gash under the warship's waterline and flooding two crew compartments, the radio room and the auxiliary machine room.

A large dent was clearly visible in its right mid-section as the destroyer limped back to Yokosuka naval base south of Tokyo, home of the Seventh fleet, on Saturday evening.

Two of three injured crew members who were evacuated from the ship by helicopter, including the ship's commanding officer, Commander Bryce Benson, were released from the U.S. Naval Hospital in Yokosuka, the U.S. Navy's Seventh Fleet said on its Facebook page on Monday. The last sailor remained in hospital and no details were given about his condition.

Vice Admiral Joseph P. Aucoin, the Seventh Fleet commander, was asked on Sunday if damage on the starboard side indicated the U.S. ship could have been at fault, but he declined to speculate on the cause of the collision. Maritime rules suggest vessels are supposed to give way to ships on their starboard.

Japanese authorities were looking into the possibility of "endangerment of traffic caused by professional negligence," Japanese media reported, but it was not clear whether that might apply to either or both of the vessels.

Japanese chief cabinet secretary Yoshihide Suga said the government was investigating with the cooperation of the U.S. side and every effort would be made to maintain regional deterrence in the face of North Korea, which has recently conducted a series of missile tests.

"It is extremely important to maintain U.S. deterrence in the light of an increasingly severe regional security situation," he told a news conference.

"We will maintain close contact with international society, including the United States and South Korea, to maintain vigilance and protect the safety of our people."

The incident has sparked as many as three investigations by the U.S. Navy and U.S. Coast Guard, and two by Japanese authorities.

Complicating the inquiries could be issues of which side has jurisdiction and access to data such as radar records that the United States could deem classified.

Although the collision occurred in Japanese waters, under a Status of Forces Agreement (SOFA) that defines the scope of the U.S. military's authority in Japan, the U.S. Navy could claim it has the authority to lead the investigations.

The three U.S. investigations include a JAGMAN command investigation often used to look into the cause of major incidents, which can be used as a basis to file lawsuits against the Navy.

"We will coordinate with Japanese authorities on investigations and will address specific requests for access in accordance with normal procedures," a Navy spokesman said.

The ship is salvageable, Aucoin said, but repairs would likely take months.

This incident was the greatest loss of life on a U.S. Navy vessel since the USS Cole was bombed in Yemen's Aden harbor in 2000, when 17 sailors were killed and 39 injured.

Naval historians recall possibly the last time a warship was hit by a larger vessel in peacetime was in 1964 off the coast of Australia. The HMAS Melbourne, an aircraft carrier, collided with the destroyer HMAS Voyager, shearing the much smaller vessel in half and killing 82 of the Voyager's crew. (Reporting by Tim Kelly, Kaori Kaneko, Elaine Lies, Linda Sieg, Kiyoshi Takenaka; Editing by Malcolm Foster and Michael Perry)

More from AOL.com:
California air base under lockdown due to 'security incident'
Rust Belt losing steam in next census
Flint official resigns after blaming water crisis on 'n*****s' not paying their bills