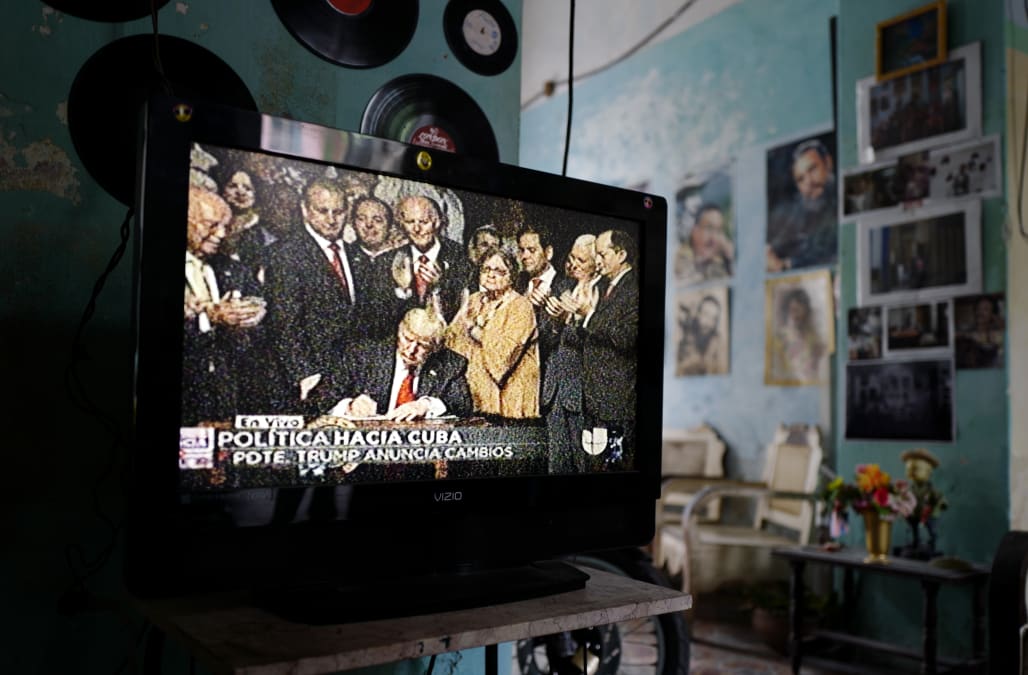 VIENNA, June 19 (Reuters) - U.S. President Donald Trump's speech on Cuba was a "grotesque spectacle," but the island's government will continue working towards better relations with the majority of Americans who back detente, Cuban Foreign Minister Bruno Rodriguez said on Monday.

Trump announced a partial rollback of the normalization of relations with Cuba on Friday in Miami, the heartland of Cuban exiles, in a theater named after the leader of the failed U.S.-backed Bay of Pigs invasion of the island in 1961.

"It was a grotesque spectacle straight from the Cold War," Rodriguez said in Vienna, during a tour of European countries, in a news conference broadcast live in Cuba.

19 PHOTOS
Daily life in and around Cuba
See Gallery

The U.S. president stopped short of breaking diplomatic relations with Cuba, restored in 2015 after more than five decades of hostility and leaves many recent agreements between the two countries intact.

However, it will tighten restrictions on Americans traveling to the Caribbean island, hurting the booming Cuban tourism industry and clamp down on U.S. business dealings with Cuba's military.

"It is necessary to wait for the U.S. government to announce regulations that implement these measures before opining on their reach and depth," Rodriguez said.

He added, however, that they would inevitably hit U.S. companies and citizens by restricting their ability to invest in or travel to Cuba, while also hurting the Cuban people.

"It will wreak economic damage not just on Cuba's state companies but also on the cooperatives and private sector workers," he said.

Moody's Investor Service released a report on Monday saying the U.S. revision of its Cuban policy was "credit negative" for the island, coming at a time when the country was already suffering liquidity problems due to weakening economic support from its crisis-wracked ally Venezuela.

The Cuban foreign minister said Trump's hope of separating the people from the military, who were simply "the people in uniform," was "infantile."

'On the contrary, these measures reinforce our patriotism, our dignity and our decision to defend national independence by all means," he said.

Meanwhile, the partial rollback of the detente would fall flat with the majority of Americans, who supported the normalization of relations with Cuba, and with whom the country would continue working, Rodriguez added.

In response to Trump's demand to return fugitives sought by the United States, Rodriguez said Cuba considered them fighters for civil liberties.

"These persons will not be returned to the United States," he said. (Reporting by Francois Murphy in Vienna; Writing by Sarah Marsh in Havana; Editing by Meredith Mazzilli and W Simon)

More from AOL.com:
Trump clamps down on Cuba travel and trade, curbing Obama detente
Cubans on Trump's new policy: 'It hurts to be going backwards'
Russia criticizes U.S. for 'anti-Cuban' approach, says it sides with Cuba