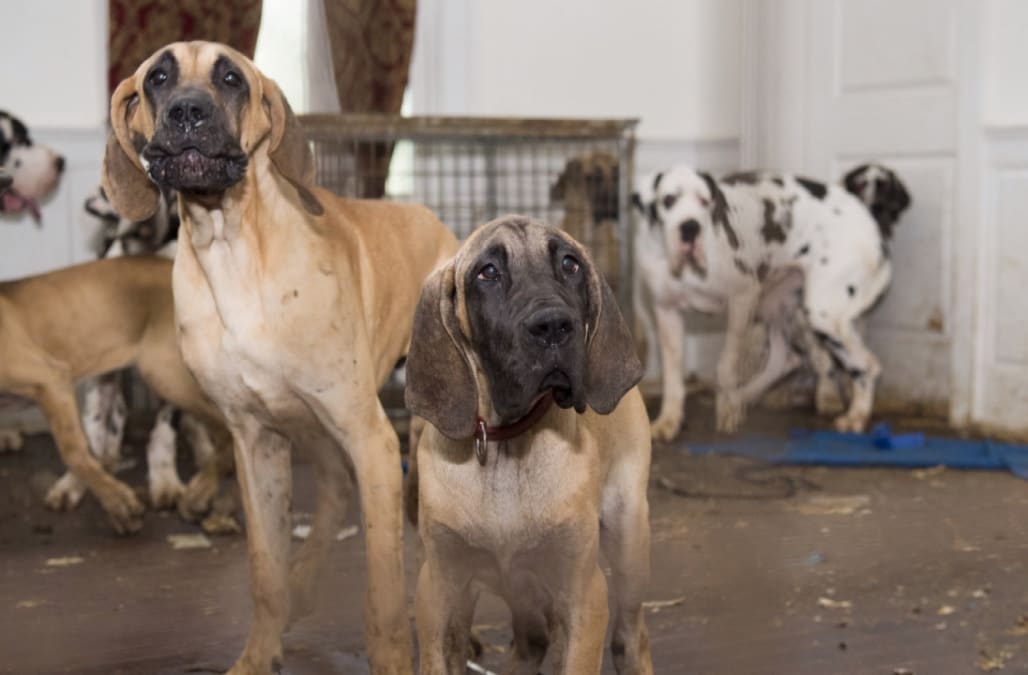 Eighty-four Great Danes were rescued from horrid conditions at a suspected "puppy mill" in New Hampshire Friday, according to police.

The Wolfeboro Police Department began investigating the owner of the residence after receiving reports of possible animal neglect. Cops had also responded to the residence previously due to barking complaints.

Read: Police Dog Fired for Being Too Friendly Gets New Job That Fits Him Perfectly

When officers arrived, they found dozens of dogs in "squalid conditions with limited access to food or water."

Police said the canines were sliding on their own feces while walking, and several had eyelids so swollen that their eyes were red. The smell of ammonia, feces and raw chicken overwhelmed rescuers.

"It's astonishing that such cruelty can occur," said Lindsay Hamrick, director of the New Hampshire Humane Society. "I'm so relieved that these animals are now safe and in the hands of people who will provide proper care for them."

The dogs reportedly ranged in age from puppies to adults.

Police said Christina Fay, 60, was charged with two misdemeanor counts of animal neglect after police freed the dogs from the broken-down eight-bedroom mansion.

Nine puppies were collected at another property as well, police said.

Many of the older animals were reportedly pregnant, authorities said. Police said Fay was selling puppies for $2,500 each at a kennel.

"I've never seen conditions this bad in more than 21 years of law enforcement. Words cannot describe the absolute abhorrent conditions these animals were living in," said Chief Dean Rondeau of the Wolfeboro Police Department. "I'm not ashamed to tell you that I was upset. I was absolutely sickened by what I saw... I can't describe it adequately, other than to use the words abhorrent and appalling."

The dogs are currently undergoing medical examination and treatment and will eventually be up for adoption.