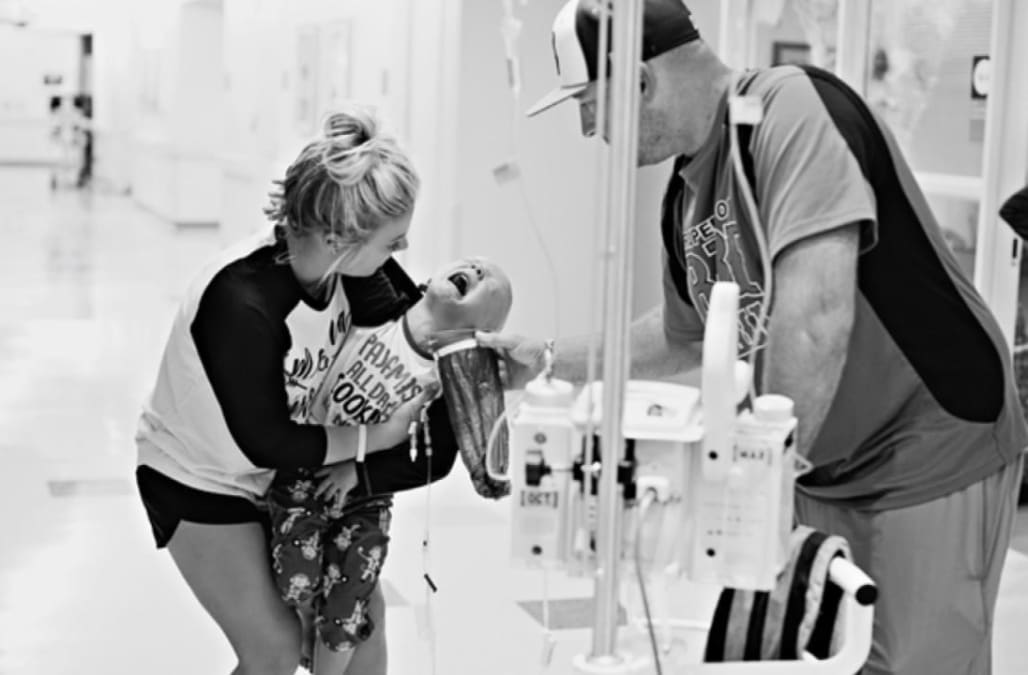 Heart-wrenching photos show the reality of childhood cancer as 3-year-old Colt Wilson suffers through the pain of chemotherapy treatments.

Colt, of Texas, was initially diagnosed with cancer just a month after his third birthday in August of last year.

Read: Cancer Patient Does 'Juju on That Beat' During Chemo: 'Doing Silly Things Makes All the Difference'

"He couldn't pee," Cortni Wilson, Colt's mother, told InsideEdition.com. "He was admitted to the ER and they found a tumor in his bladder. They determined he had a soft tissue muscle cancer and he started chemo on September 1."

Colt has undergone 43 weeks of five separate types of chemotherapy and 28 days of radiation, which he had to be put to sleep for.

"It has ripped our family apart," Wilson said. "You have to do it and you have to treat him. It has been very hard. It was really hard for me to watch Colt be as sick as he is."

In some of the photos, captured by Sherina Welch, Colt throws up blood after chemotherapy caused extreme sickness. In others he is seen screaming in pain.

"Colt gets really sick from one of the chemo's he takes and he'll throw up for about 24 hours. Sometimes he is throwing up blood," Wilson said.

Welch has documented Colt's journey as part of a photo project, "More than 4," which seeks to spread awareness about childhood cancer research.

Despite the $4.9 billion in the National Cancer Institute's 2014 budget, only four percent went to research of childhood cancer, according to the Coalition Against Childhood Cancer (CAC2).

Colt's mom said he spent almost the entire third year of his life in the hospital.

"My 3-year-old was getting adult chemo. That's what was making him so sick. There is so little funding," Wilson said.

Colt finished his chemotherapy Friday and will now have to be monitored once every two months to see if the tumor is growing. If it does grow, he will have to go through another round of chemo or undergo surgery.

But Wilson is just glad he made it over his first hurdle.

On Friday, Welch captured the special moment that chemotherapy patients at Texas Children's Hospital participate in to signify that they made it through treatment — ringing a metal bell at the facility.

Posted up on the wall next to the bell, was a sign that read, "Way to go Colt!"

Read: Husband Gifts 500 Roses to Wife During Her Final Round of Chemo for Breast Cancer

In the background of the photo, Wilson can be seen completely overcome with emotion.

"It's not over for us but it was a sigh of relief. It was a rush of emotions. You don't get a chance to deal with it. It's fight or flight. All my emotions came out when I heard that bell."