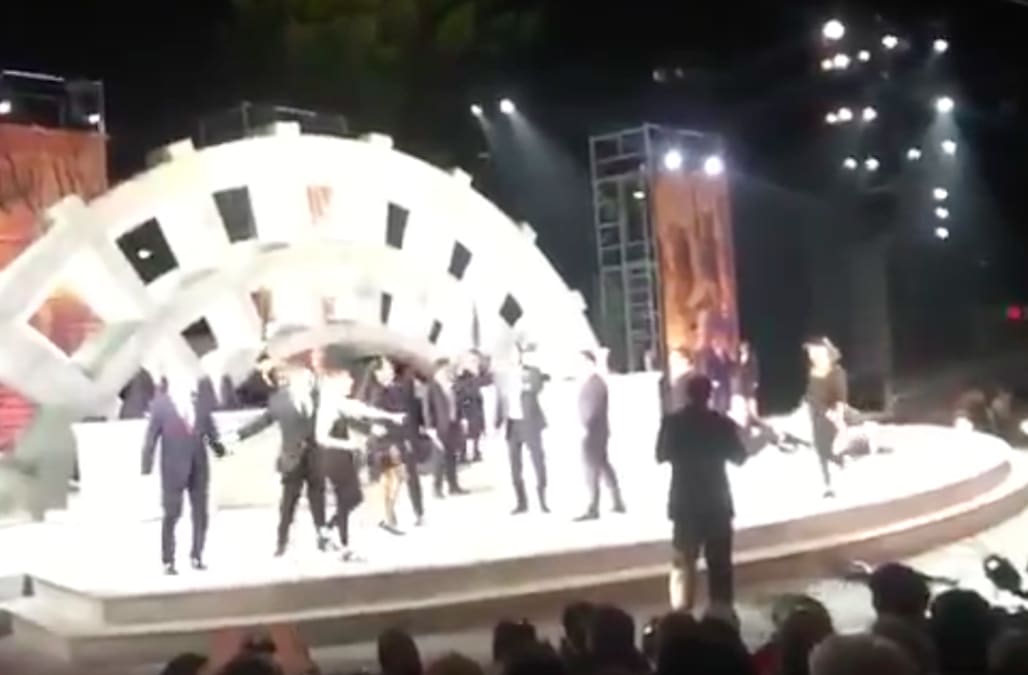 A video posted to Twitter by conservative filmmaker Jack Posobiec appears to show Laura Loomer, a right-wing activist, interrupting a Friday performance of the Public Theater's production of Julius Caesar. The production made headlines Sunday after conservatives learned it seemed to model its titular character — who is brutally assassinated by his political associates — off of President Donald Trump.

"Stop the normalization of political violence against the right," Loomer yelled after walking on stage.

After an announcement that the production will be momentarily paused, the audience begins to boo the activist. As security removes her from the stage, the audience cheers.

Reactions to protest at controversial 'Julius Caesar' play
The Left doesn't like it when their tactics are used against their "expression." How many wd storm stage if "Obama"… https://t.co/pO4bH3u0Te
Laura, do you REALLY not know the play was staged in DC in 2012 with an Obama-like Caesar? Without protest or stunt… https://t.co/jdVIkyyalP
I can't imagine how little you have to worry about in your life to protest a Shakespeare play
Just to be clear - because it's reached my attention we don't all know this - the events in a play, although happening live, are not real.
Black Americans are executed without consequence by the cops while alt-right nerds feel victimized by Shakespeare https://t.co/JC86QHGfIO
Caesar killed in a play & you protest! Cop kills #PhilandoCastile w/ impunity in front of a 4-yr-old girl & dead silence. #FreeLaura's mind.
Up Next

The cheers of the audience prompt the man filming to scream, "You are all Goebbels," referencing Hitler's propaganda czar Joseph Goebbels.

"You are inciting terrorists!" he yells, motioning at the crowd. "The blood of Steve Scalise is on your hands!"

House Majority Whip Rep. Steve Scalise, whom the man references in his admonition of the audience, was seriously wounded Wednesday when a gunman opened fire on him and other Republican members of Congress as they practiced for an annual baseball game for charity. Conservatives seized on the shooter's alleged Facebook page, which showed support for Sen. Bernie Sanders and antipathy for Republicans, to argue the attack was politically motivated.

Following the attack, Donald Trump Jr. circulated an opinion on Twitter that seemed to argue that the play's glorification of the assassination of Trump may have incited the violence against Republicans.

"Events like today are EXACTLY why we took issue with NY elites glorifying the assassination of our President," a tweet, which was retweeted by the president's son, said.

Loomer live-streamed on Periscope her interruption of the controversial performance of the play.

On Sunday, Delta Airlines withdrew its sponsorship of the Public Theatre over the production after Trump supporters threatened a boycott. On Monday, Bank of America joined them in pulling funds from the theatre.

Scholars believe William Shakespeare wrote Julius Caesar in 1599. It has been performed ever since.