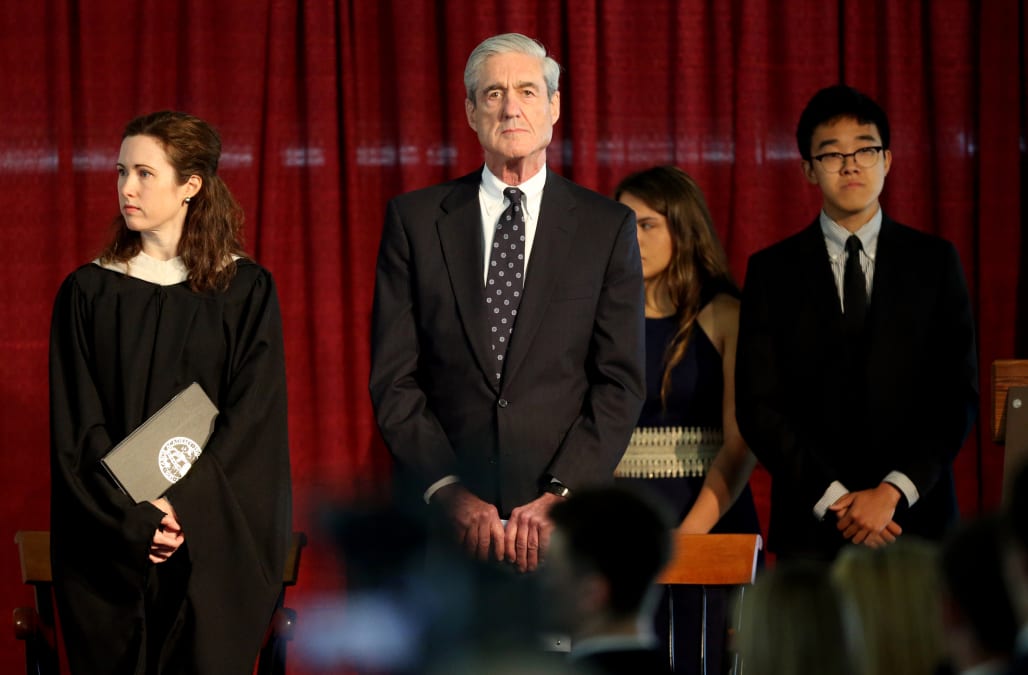 Robert Mueller, the special counsel in the Trump-Russia probe, has moved to hire an all-star team in recent days. The hires suggest he is employing a follow-the-money approach to the investigation. The developments will raise new questions about Trump, and his associates', ties to Russia. Robert Mueller in recent days has hired lawyers with extensive experience in fraud, racketeering, and other financial crimes to help him investigate whether President Donald Trump's associates colluded with Russia to meddle in the 2016 presidential election.

Mueller, who was appointed as special counsel last month to lead the probe into Russia's election interference, is also homing in on money laundering and the business dealings of Trump's son-in-law and senior adviser, Jared Kushner, according to reports in the New York Times and Washington Post.

The developments indicate Mueller is taking a follow-the-money approach to the investigation that could leave Trump's own sprawling business empire hugely vulnerable.

Mueller has hired Lisa Page — a trial attorney in the Justice Department's organized crime section whose cases centered on international organized crime and money laundering — and Andrew Weissmann, a seasoned prosecutor who oversaw cases against high-ranking organized criminals on Wall Street in the early 1990s and, later, against 30 individuals implicated in the Enron fraud scandal.

Mueller has also recruited James Quarles, who specialized in campaign-finance research for the Watergate task force, according to Wired; Michael Dreeben, considered by some to be "the best criminal appellate lawyer in America"; and Aaron Zebley, a former senior counselor in the DOJ's National Security Division specializing in cybersecurity.

'A pretty disproportionate cross-section of a lot of our assets'

As Trump praised and defended Russian President Vladimir Putin along the campaign trail, many questioned whether the real-estate mogul had any financial incentives — including business ties or outstanding debt — to seek better relations with Moscow.

"It's not wrong to do business with Russians," Republican Sen. Lindsey Graham, the chairman of the Senate Judiciary subcommittee on crime and terror, told CNN last month. "But Trump has said he never did business with the Russians."

The question came up again early last month after the golf writer James Dodson told WBUR that Trump's son, Eric, bragged in 2014 that the Trump family had secured access to $100 million from Russian lenders to fund their golf courses.

"He just sort of tossed off that he had access to $100 million," Dodson said. "I said, 'Eric, who's funding? I know no banks — because of the recession, the Great Recession — have touched a golf course. You know, no one's funding any kind of golf construction. It's dead in the water the last four or five years.'

"He said, 'Well, we don't rely on American banks. We have all the funding we need out of Russia.' I said, 'Really?' And he said, 'Oh, yeah. We've got some guys that really, really love golf, and they're really invested in our programs. We just go there all the time.'"

Eric has denied the story, which he called "completely fabricated." But it's not the first time one of Trump's sons has boasted of ties to Russia. In 2008, Donald Trump Jr. said the Trump Organization saw "a lot of money pouring in from Russia."

"Russians make up a pretty disproportionate cross-section of a lot of our assets," he said at the time.

The Washington Post has reported that "Trump and his family members have made numerous trips to Moscow in search of business opportunities" since the 1980s, "and they have relied on Russian investors to buy their properties around the world." The Trump Organization is also believed to have received loans from Russia when it was struggling in the 1990s, the report said.

The family's bank of choice has long been Deutsche Bank, which was the only bank willing to loan to Trump after he lost others money in a series of bankruptcies — something he figured "was the bank's problem, not mine," he wrote in his 2007 book, "Think Big: Make it Happen in Business and Life."

"What the hell did I care?" Trump wrote. "I actually told one bank, 'I told you you shouldn't have loaned me that money. I told you the goddamn deal was no good.'"

Deutsche Bank was fined earlier this year as part of a Russian money-laundering scheme that involved its Moscow, New York, and London branches. The bank refused earlier this month to hand over documents requested by five Democratic lawmakers related to the bank's relationship with Trump, citing the confidentiality of non-public customer information. But it's likely that the FBI could get a hold of them.

Trump, meanwhile, has denied having any ties — business or personal — to Russia.

"Russia has never tried to use leverage over me," Trump tweeted on January 11. "I HAVE NOTHING TO DO WITH RUSSIA — NO DEALS, NO LOANS, NO NOTHING!"