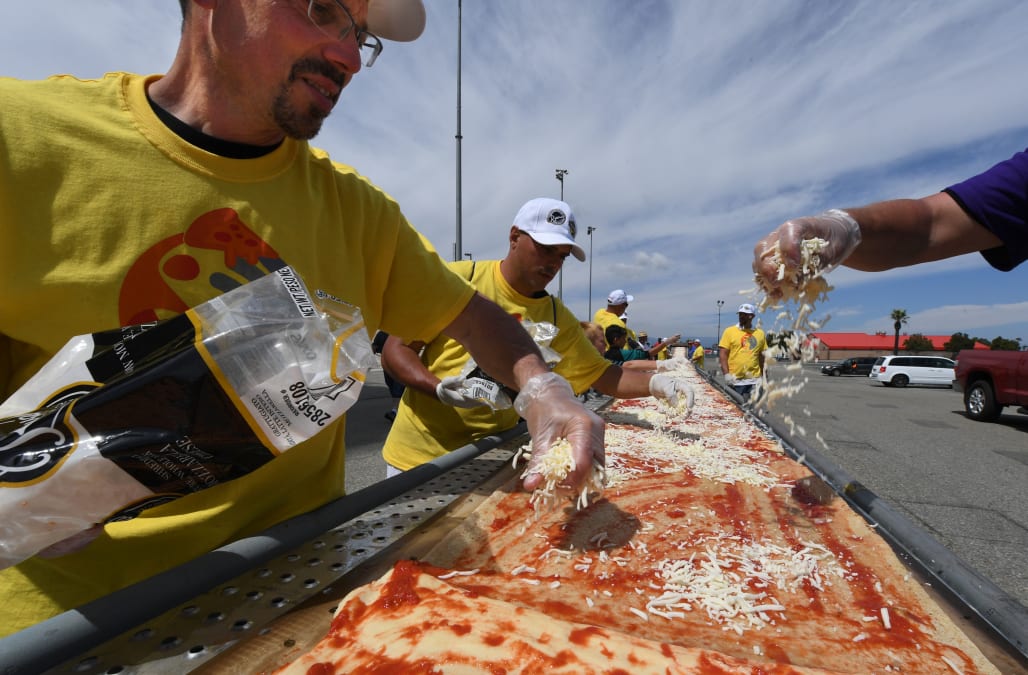 It's not as great as the Krusty Crab Pizza from Sponge Bob Square Pants, but this pizza is still something to be proud of.

It's because we can now claim to have the longest pizza in the world. Go USA!

Group Guinness World Records
Nearly 2,000 people float in a line setting a new Guinness world record for the most people floating while holding hands in Lake Epecuen, a salty lake, near Carhue, Argentina, January 29, 2017 in this handout supplied by Prensa Municipio Adolfo Alsina. Picture taken January 29, 2017. Prensa Municipio Adolfo Alsina/Handout via Reuters ATTENTION EDITORS - THIS IMAGE HAS BEEN SUPPLIED BY A THIRD PARTY TPX IMAGES OF THE DAY
People dressed as Albert Einstein gather to establish a Guinness world record for the largest Einstein gathering, to raise money for School on Wheels and homeless children's education, in Los Angeles, California, United States, June 27, 2015. REUTERS/Lucy Nicholson
A group of 1000 customers receive a facial massage at a sports centre in Jinan, Shandong province, China, May 4, 2015. A group 1000 women were given a 30 minutes facial beauty treatment together on Monday that achieved a Guinness record for the largest group of people having beauty treatment in the same location, according to local media. REUTERS/Stringer CHINA OUT. NO COMMERCIAL OR EDITORIAL SALES IN CHINA
Women in wedding dresses hold balloons at a wedding dress market during an event attempting to break the Guinness world record for a gathering with the most people dressed as brides, in Suzhou, Jiangsu Province, China, October 7, 2016. Picture taken October 7, 2016. China Daily/via REUTERS
Pregnant women practice yoga at Hefei Olympic Sports Center on June 5, 2016 in Hefei, China. 913 pregnant women undertook a yoga class to set a new Guinness World Record for the largest prenatal yoga class. (Photo by VCG/VCG via Getty Images)

300 individuals jumped in unison to set the world record for the most people skipping the same rope in Bangkok, Thailand on January 11, 2016.

6,000 individuals in the Philippines set the world record for the largest human image of an anchor  on January 19th 2016.

439 people in England broke the world record for largest group of people dressed as dogs on April 20, 2016 in efforts to raise money for service dogs.

At over 6,330 feet, we've snatched the Guinness World Record for longest pizza from Italy, in a most delicious way.

About 100 volunteers gathered at the Auto Club Speedway in Fontana, California to craft the 1.2-mile long pie, using a blowtorch to melt the gooey goodness together.

All told, the large carb could feed 10,000 people, that is if they can find any Californians who will tear themselves away from their pressed juices.