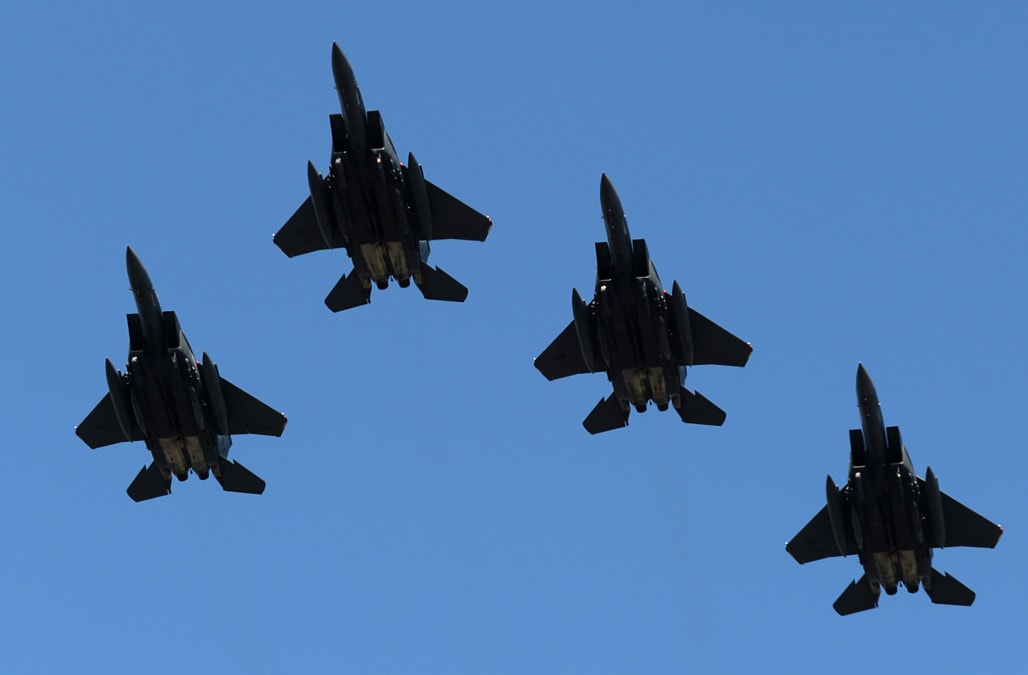 Qatar is facing a severe economic and diplomatic boycott by Saudi Arabia and its regional allies who cut ties last week, in the worst rift among Gulf Arab states in years. They accuse Qatar of funding terrorism, fomenting regional unrest and cozying up to their enemy Iran, all of which Qatar denies.

Trump has repeatedly echoed the accusations against Qatar, even as his Defense and State Departments have tried to remain neutral in the dispute among key allies. Qatar hosts a big U.S. military base housing the headquarters of U.S. air forces in the Middle East.

RELATED: Countries that have cut ties with Qatar

"This is of course proof that U.S. institutions are with us but we have never doubted that," a Qatari official in Doha said. "Our militaries are like brothers. America's support for Qatar is deep-rooted and not easily influenced by political changes."

A Qatari defense ministry source said the deal was for 36 jets. In November, under the administration of former President Barack Obama, the United States approved a possible sale of up to 72 F-15QA aircraft to Qatar for $21.1 billion. Boeing, the prime contractor on the sale, declined to comment.

Turkish Foreign Minister Mevlut Cavusoglu, on a Gulf tour trying to help broker an end to the crisis, defended the plane deal.

"Just like other countries, like Saudi Arabia, the United Arab Emirates, Egypt .... it is natural for Qatar to buy airplanes or parts necessary for its own defense," Cavusoglu said in Kuwait following talks with his Kuwaiti counterpart, according to Turkey's state-run Anadolu news agency.

Turkey is friendly to Qatar and has sent food supplies since the sanctions were imposed. Kuwait has led efforts to mediate the dispute.

A European diplomat in the Gulf said the timing of the deal appeared coincidental.

"Presumably the U.S. could have delayed the deal if they'd wanted to, although I don't think there's a great connect between sales and foreign policy."

Qatar is an important base for the U.S. military carrying out operations against Islamic State militants and other groups in Iraq, Syria, Afghanistan and beyond. Al Udeid Air Base is home to more than 11,000 U.S. and coalition troops.

The Pentagon said the jets sale would increase security cooperation between the United States and Qatar and help them operate together. It added that Mattis and Attiyah had also discussed the current state of operations against Islamic State and the importance of de-escalating tensions in the Gulf.

The fighter jet deal had been stalled amid concerns raised by Israel that equipment sent to Gulf states could fall into the wrong hands and be used against it, and by the Obama administration's broader decision-making on military aid to the Gulf.

Trump, who took office in January, has accused Qatar of being a "high-level" sponsor of terrorism, potentially hindering the State Department's efforts to help ease the diplomatic crisis.

In his remarks to journalists in Kuwait, Cavusoglu reiterated Turkish criticism of economic sanctions by the three Gulf Arab states and Egypt against Qatar as "wrong," although he denied that Turkey was supporting one side.

"It is out of the question for us to take sides here. We are making statements that are very balanced and aimed at a resolution," he said. "However, being at the same distance (from all parties) does not mean not telling the truth," he added.

Cavusoglu, who had visited Qatar before Kuwait, said he would convey Turkey's views during a visit to Saudi Arabia.

Turkey and Qatar have both provided support for the Muslim Brotherhood in Egypt - a broad movement whose Islamist goals are anathema to Egypt's ex-military president, Abdul Fattah al-Sisi and to many of the Gulf's dynastic rulers.

More from AOL.com:
Report: US, Turkey discuss Qatar row, Syria on phone call
Trump doubles down on criticism of Qatar, undermines US State Department in the process
Iran's Supreme Leader says the US created the Islamic State