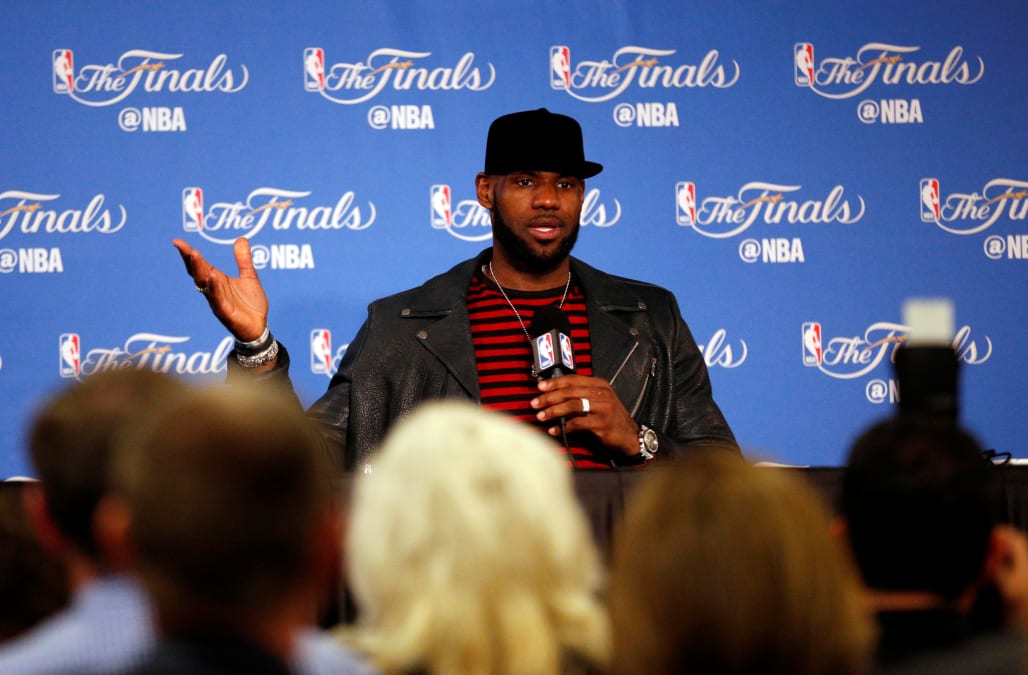 Three years after returning to the Cleveland Cavaliers for a shot at redemption, LeBron James' future is once again up in the air.

Last summer, James signed a three-year, $100 million deal with the Cavs with a player option for the third year in 2018.

Now, chatter over James' free agency that summer is picking up, and it revolves around him leaving the Cavs to join the Los Angeles Lakers.

The talk recently surfaced when The Ringer's Kevin O'Connor reported that some people around the NBA think James may leave Cleveland for the Lakers or Clippers. James owns a house 30 minutes from the Staples Center (where both teams play) and has off-court interests that would benefit from being in LA.

On Wednesday, Yahoo's Adrian Wojnarowski said on his podcast that James' championship in Cleveland in 2016 has "liberated" him to leave again, and that many people think he is "likely" to pursue one of the LA teams.

"Not only is there no guarantee he's coming back, I'm not sure there is an expectation he's re-signing there. I think within Cleveland and around the league they feel that he is very much in play to leave again and likely head out West to one of the two LA teams. The Lakers could very well be a target

"I think the focus, a lot of LeBron's business interests, his Hollywood aspirations, his media ventures are based out there. And I wrote this last year and said it and believed it — the minute he won that championship in Cleveland, he was liberated to leave again. Now, if he had not won a title in Cleveland and left again, I think there would be tremendous backlash again. But the fact that he came back and did what he set out to do, which was bring a title to Cleveland [could allow him to leave again]."

Wojnarowski also said a reunion with Dwyane Wade in Miami, depending on the shape of the team, could be in play.

Of course, part of the impetus of this is the Warriors' foreseeable dominance. The Warriors are in position this summer to lock up their core of Stephen Curry, Kevin Durant, Draymond Green, Klay Thompson, Andre Iguodala, and Shaun Livingston until at least 2019. The Cavs, meanwhile, have no cap space and little in the way of assets to improve their team.

After losing to the Warriors in five games in the Finals, things look a little bleaker than usual in Cleveland. When asked after Game 5 of how the Cavs can clear the hurdle that is the Warriors juggernaut, James only vaguely said he has to figure things out.

While James has not openly discussed leaving the Cavs, he has talked about forming another super-team with his friends, Wade, Chris Paul, and Carmelo Anthony. James told Bleacher Report's Howard Beck in 2016:

"I really hope that, before our career is over, we can all play together At least one, maybe one or two seasons—me, Melo, D-Wade, CP — we can get a year in. I would actually take a pay cut to do that ... It would be pretty cool. I've definitely had thoughts about it."

It would take some salary-cap gymnastics for the Cavs to figure out a way to get all four players on the same team, and some believe Cleveland would not be the most appealing place for the four stars. LA, of course, then becomes a more viable option, particularly if Paul re-signs with the Clippers this summer.

The Cavs have potentially been bracing for a James exit as well. Since returning to Cleveland, James has only signed one-year deals, both for financial and motivational reasons. If the Cavs didn't build the team to James' liking, or he felt the front office was getting complacent, he would have the ability to leave again.

As O'Connor notes, Cavs GM David Griffin acknowledged the possibility of James leaving this year while discussing how the Cavs have traded future draft picks for win-now players.

"It's our job to win right now and everyone feels that. Ownership feels that, ownership invests in it. When you have that amount of clarity, it makes doing things like trading protected firsts make sense. It may not look good on the books moving forward and people may look at it and say, 'Oh my god, they've mortgaged their future.' Well, if LeBron and Kyrie [Irving] and Kevin [Love] are gone, and we become a lottery pick, we'll have those picks because they're protected."

For now, James is a Cavalier, and their offseason focus will be on finding the missing pieces needed to get them back on the Warriors' level. But James' future is once again a talking point, and it could linger over the Cavs for the next year.