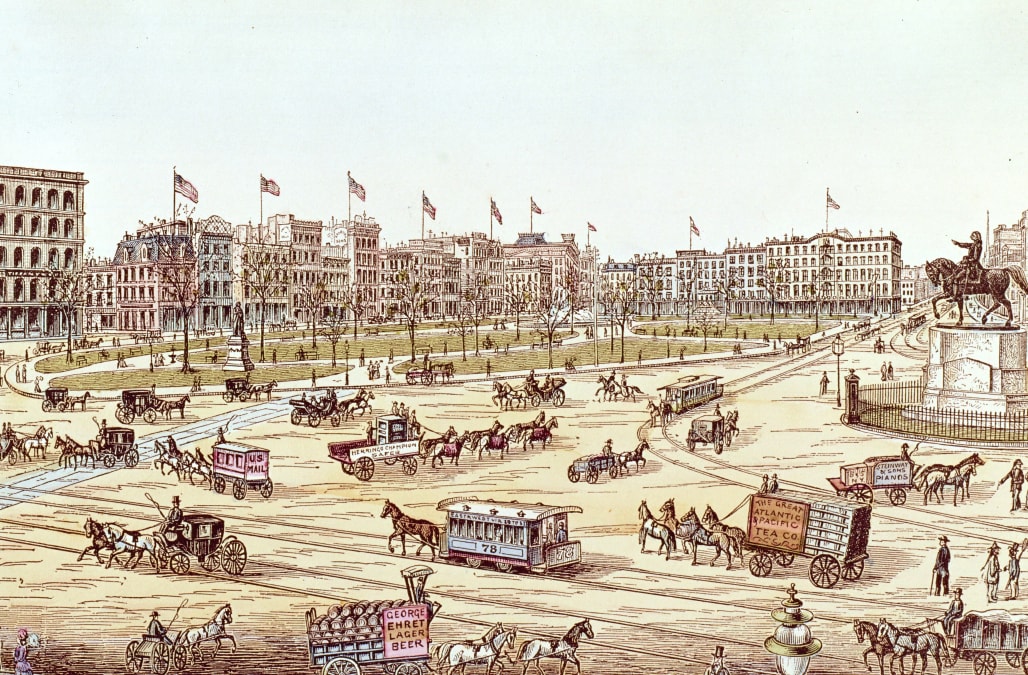 Most New Yorkers today are living on what was once farmland.

As early as the 17th century, before Manhattan formed its famous grid, the island contained farms in neighborhoods from Midtown to the Upper West Side.

The Museum of the City of New York's online collection reveals what the city looked like at the time. The series, "The Greatest Grid," features illustrations and photos of New York City's former rolling hills, which were later demolished to create a flat streetscape.

Take a look at the city's transformation below:

The Bowery is the oldest thoroughfare on the island of Manhattan. When the Dutch settled there in 1654, they named the path Bouwerij — an old Dutch word for "farm" — because it connected cattle farms and estates on the outskirts to (what is today) Wall Street.

At the time, New York City (then known as New Amsterdam) featured rolling hills, forests, boulders, farms, and spaced-out homes. This 1776 illustration is of present-day University Heights in the Bronx.

This 1862 illustration depicts a triangular farm on Manhattan's Upper West Side during the Civil War. High property taxes discouraged landowners from building on their lots, and the area would not see full-scale development until the 1880s.

Photo Credit: The Museum of the City of New York

Sheep grazed on west Central Park's Sheep Meadow from the 1860s until 1934, when they were moved to Brooklyn's Prospect Park and later to a farm in the Catskill Mountains.

Photo Credit:The Museum of the City of New York

The sheep's owners relocated them because they feared that impoverished New Yorkers would eat the animals.

Photo Credit: The Library of Congress

Beginning in the mid-19th century, Manhattan started demolishing the area's hills — and thus farmland and some farmhouses — to make way for the city's level thoroughfares. This 1869 photo shows a team of laborers excavating through a hillside to extend Eighth Avenue north.

"The time will come when New York will be built up, when all the grading and filling will be done, and when the picturesquely varied, rocky formations of the Island will have been converted into formations for rows of monotonous straight streets, and piles of erect buildings," Frederick Law Olmsted, an NYC landscape architect, wrote at the time.

Photo Credit: The Museum of the City of New York

Patrick and Mary Brennan's farmhouse, pictured below in 1879, lasted until about 1900. Edgar Allan Poe rented a room there, where he most likely wrote "The Raven."

This photo was taken in 1882 from the roof of a mansion that belonged to George Ehret, a successful brewer and one of the first wealthy New Yorkers to move to Prospect Hill (now Carnegie Hill).

Photo Credit: The Library of Congress

The photographer Peter Baab captured what he called the "march of improvement." New row houses and mansions began to overrun the old factories, squatter homes, and farmhouses that once dominated the Upper East Side.

In the late 19th century, the city pushed to urbanize, and urban livestock — including hogs and dairy cows — were seen as a threat to the image and highbrow future of New York. According to CityLab, many members of Manhattan's elite bought (or took) the city's farmland, often owned by those of lower status, during this period.

Photo Credit: Peter Baab/Museum of the City of New York

Irish pig farmers and German gardeners, as well as the African-American settlement of Seneca Village, worked and lived on the land that's known today as Central Park. Most of their homes were destroyed in the 1860s to create the park.

In this photo from 1890, 94th Street cuts through a hill next to a farmhouse.

Photo Credit: Museum of the City of New York

The newly graded streets attracted residents to upper parts of Manhattan. Within two decades, apartment buildings replaced the farmhouses in this 1898 photo.

Photo Credit: Museum of the City of New York
Up Next