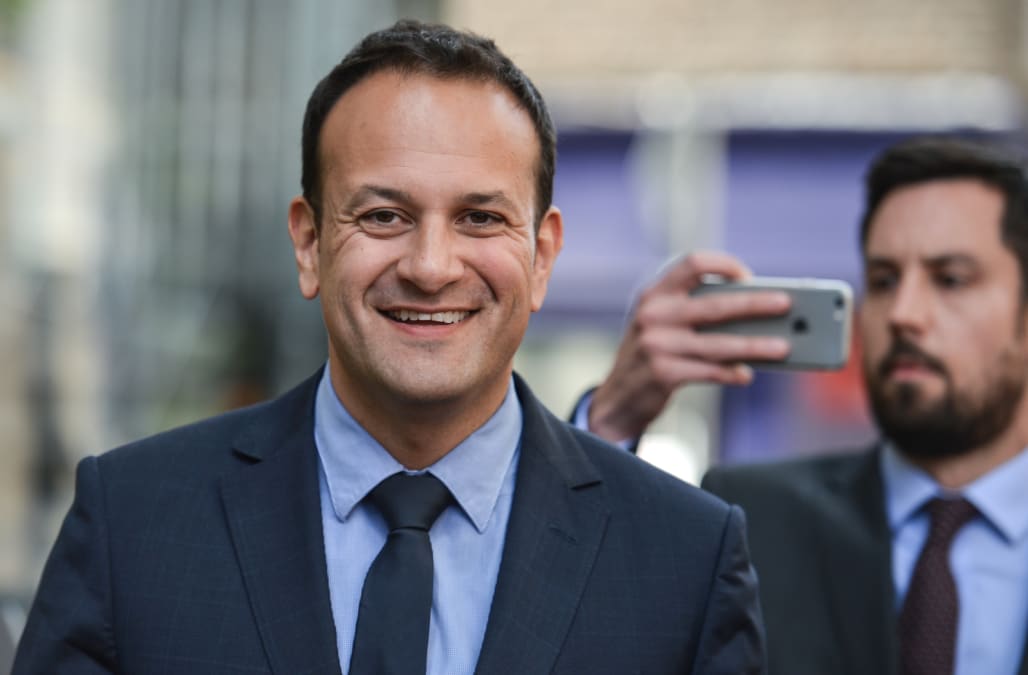 DUBLIN, June 14 (Reuters) - When Leo Varadkar's Indian father, Ashok, moved to Ireland in the 1970s, he chose one of Western Europe's most socially conservative countries to call home.

Thirty-eight years later, his youngest child became the once-staunchly Catholic country's first openly gay prime minister, its first of Indian descent and the youngest person ever to hold the office.

Varadkar's election in parliament on Wednesday, 10 days after he succeeded Enda Kenny as leader of the governing Fine Gael party, marks another symbolic moment for Ireland.

"If my election today shows anything, it is that prejudice has no hold in this Republic," Varadkar said to huge applause on June 2 after winning the leadership of the center-right party.

"I know when my father traveled 5,000 miles to build a new home in Ireland, I doubt that he ever dreamed that one day his son would grow up to be its leader and despite his differences, his son would be judged by his actions not his identity."

"Every proud parent in Ireland today can dream big dreams for their children," Varadkar said.

The fact the milestone of electing a gay premier is barely mentioned in local media and has taken place -- in the words of one former government minister -- "without anybody batting an eyelid" shows just how far Ireland has come.

Instead, after six years of Kenny's steady stewardship, the focus has been on the stark change of style likely to follow the election of a minister known as a straight talker. Colleagues giddily proclaim that their new leader has the 'X Factor'.

Varadkar had not been born when Kenny, 66, was first elected as a member of parliament and comes from the generation hit hardest by Ireland's economic meltdown. He owned an apartment that fell into negative equity at the turn of the decade.

He will also be a year younger than France's Emmanuel Macron when he attends his first EU leaders summit later this month. But Varadkar has been quick to point out that the favorite to become Austria's new prime minister, Sebastian Kurz, is eight years younger.

"He's a once-in-a-generation politician," said Fine Gael member of parliament Jim Daly, echoing the comments of most of his colleagues who have placed high hopes in Varadkar.

Such a dramatic change of style could go two ways, analysts warn. Varadkar's tendency to shoot from the hip can backfire. As a novice minister he said Ireland would likely need a second bailout six months after signing its 2010 EU/IMF package.

Colleagues were furious and Ireland went on to exit the bailout on schedule in 2013.

"When you're Taoiseach (prime minister), you can't speak as open and freely as when you're a maverick, straight-shooting minister. If he doesn't temper his more colorful contributions, that could actually become a liability quite quickly," said Theresa Reidy, a politics lecturer at University College Cork.

She said that although he has held three cabinet post since 2011, Varadkar is relatively inexperienced. With the exception of Kenny, every prime minister since the 1960s either served as finance or foreign minister prior to taking office.

Kenny sat in parliament for 35 years before his elevation. Varadkar was first elected in 2007.

Seen as being on the right wing of the centrist Fine Gael, Varadkar also upset Ireland's left with a recent publicity campaign highlighting social welfare fraud.

And his management style will be tested by Fine Gael's weak minority government that is backed by independent lawmakers and facilitated by the main opposition party.

As someone who once described himself as not being "a natural people's person," the trained doctor will need a good bedside manner.

"We don't really know how he will react under pressure and it is different when you're Taoiseach," Reidy said.