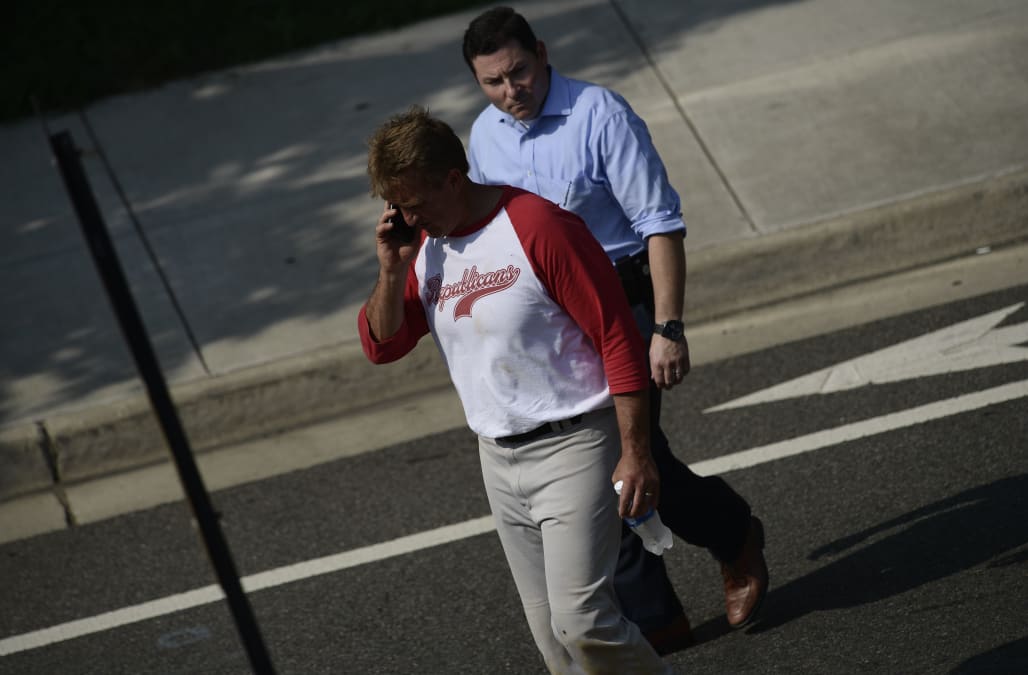 House Majority Whip Steven Scalise was one of several people injured in a shooting Wednesday morning at a congressional baseball practice in Alexandria, Virginia.

Sources told CNN the shooting was a "deliberate attack," and members of Congress who attended the practice spoke to media outlets to recount what they had witnessed.

Rep. Mo Brooks of Alabama told CNN he saw at least five people who were injured in the shooting, one of whom he assisted by using his belt as a tourniquet.

He described the shooter as a white, somewhat heavyset man armed with some sort of semiautomatic weapon. Brooks talked to CNN about the moment he heard the shooting.

Social reactions to shooting at congressional baseball practice
Rep. Steve Scalise of Louisiana, a true friend and patriot, was badly injured but will fully recover. Our thoughts and prayers are with him.
Both @POTUS & @VP are aware of the developing situation in Virginia. Our thoughts and prayers are with all affected.
Congressional baseball field shooting went on for 10 minutes. @SenRandPauI says w/out police presence would be "killing field" "a massacre"
@AlexandriaVAPD This kind of thing is not ok. Use words, not bullets. Hope the congressman recovers quickly.
Thoughts and prayers w my Republican baseball friends this morning. Dem practice cancelled holding in dugout w security
This morning the hearts of the whole House are with @SteveScalise, the brave Capitol police, staff, and all those who were in harm's way.
There has been an unthinkable shooting this morning. Our thoughts & prayers are with Congressman @SteveScalise. https://t.co/DqyUXrEZaU
Karen & I are praying for @SteveScalise, the Capitol Police, & all hurt for a speedy recovery. Our hearts are with them & their loved ones.
Up Next

"I look around, and behind third base in the third base dugout, which is cinder block, I see a rifle," Brooks said. "And I see a little bit of a body and then I hear another 'blam' and I realize that there's an active shooter. At the same time I hear Steve Scalise over near second base scream that he was shot."

Brooks said the shooter continued to fire and people in the field scattered.

"I run around to the first base side of home plate, and we have a batting cage that's got plastic wrapped around it to stop foul balls, and hide behind the plastic," he said. "... I'm lying on the ground with two or three others as gunfire continues."

Sen. Jeff Flake told CNN that Scalise had been on second base fielding balls when a "very loud shot" rang out, and a gunman could be seen standing over the third base dugout "with a clear view of the field and everybody on it."

"All of a sudden a couple more shots, and we knew what it was and I just remember seeing some gravel bounce up as shots were coming near us," Flake said.

"... Steve dragged himself about 15 yards off of it, from second base onto the field, and was laying motionless out there," Flake told reporters. "But we couldn't get to him until the shooting stopped. After a time, another staffer ran in with a leg wound, he was shot in the leg, and ... was then shot in the field and continued to run."

Flake said that he and others got a belt and put it around Scalise's wound. Brooks told CNN that it was his belt.

A 10-year-old boy was also at the practice, and Flake said that he and others got him into the dugout and put him under a bench during the shooting.

Rep. Mark Walker told NBC News that the "gunman was there to kill as many Republican members as possible," adding that he was "shaken but OK."

Rep. Ron DeSantis told Fox News he left the practice before the shooting broke out, but recalled a man approaching him and asking "whether it was Republicans or Democrats out there."

"It was just a little odd, and then he kinda walked toward the area where all this happened," DeSantis said, adding that he was not carrying anything at the time. A few minutes after DeSantis left the area, the shooting started.

Sen. Rand Paul of Kentucky told MSNBC he had been in the batting cage when what sounded like an "isolated shot" rang out, shortly followed by a rapid succession of shots, and a chaotic scene as people scrambled for cover and attempted to ascertain where the shots were coming from.

Paul said he saw an injured Scalise attempting to drag himself through the dirt into the outfield, and shots hitting the dirt around staffers in the right field.

"It was basically a killing field," Paul later told CNN. "Had the Capitol Police not been there, he would have walked around and shot everybody.

Paul added that were Scalise — a member of congressional leadership — not in attendance, there likely would not have been enough of a security presence to respond to the shooter.

"By him being there it probably saved everyone else's life," Paul said.

Rep. Mike Bishop, who told Detroit's WWJ radio station he was standing at the home plate when the shooting began, said the gunman had been armed with a rifle "that was clearly meant for the job of taking people out."

"He had several rounds and magazines that he kept unloading and reloading," Bishop said.

"The only reason why any of us walked out of this thing, by the grace of God, one of the folks here had a weapon to fire back and give us a moment to find cover. We were inside the backstop and if we didn't have that cover by a brave person who stood up and took a shot themselves, we would not have gotten out of there and every one of us would have been hit — every single one of us."

Scalise, as well as two Capitol Hill police officers who were shot, appear to be in stable condition, MSNBC reported.

Alexandria police said on Twitter that the suspected shooter is in custody and not a threat.