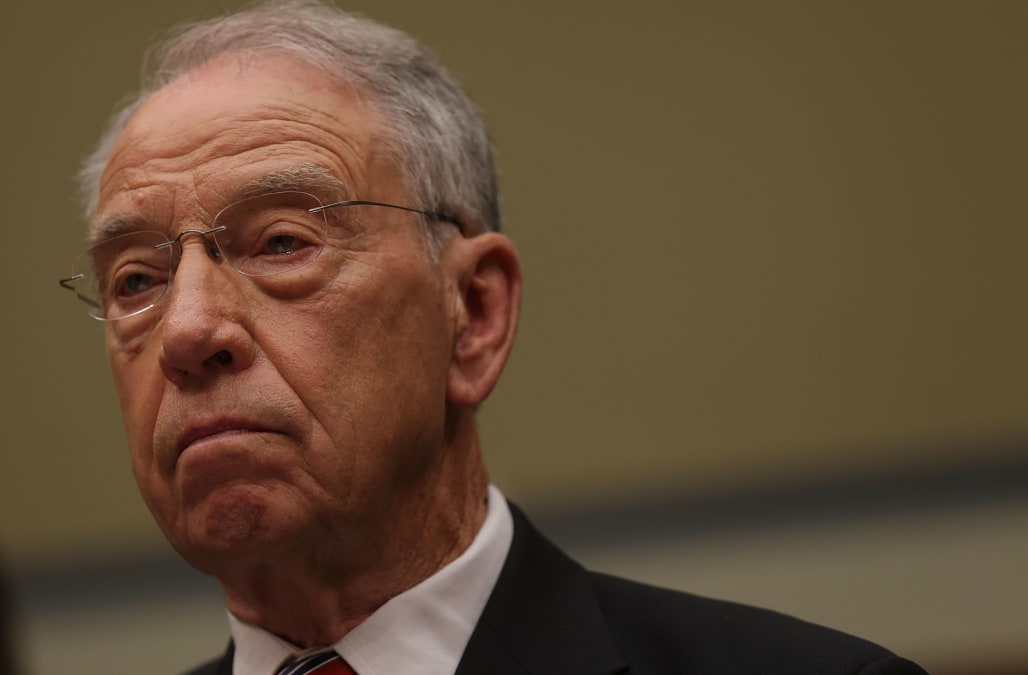 WASHINGTON (Reuters) - An already contentious move by Republican President Donald Trump to block opposition Democratic lawmakers from getting information about his administration received its most scathing criticism yet on Friday - from one of the most powerful Republican members of the U.S. Senate.

Judiciary Committee chairman Chuck Grassley of Iowa, in a more than 2,100-word letter to the White House, asked Trump to rescind unprecedented guidance that told executive agencies they do not have to honor requests for information from lawmakers in the minority party, currently the Democrats.

This week in hearings all over Capitol Hill members of both parties have criticized the information block. Democrats have posited that the Trump administration is trying to hide mistakes, problems or wrongdoing from them.

Chairman Sen. Chuck Grassley (R-IA) speaks during a meeting of the Senate Judiciary Committee to discuss the nomination of Judge Neil Gorsuch to the Supreme Court on Capitol Hill in Washington, D.C., U.S., April 3, 2017.

Chuck Grassley (R-IA), Ted Cruz (R-TX), and Pat Roberts (R-KS) attend President Donald Trump address to a joint session of the U.S. Congress on February 28, 2017 in the House chamber of the U.S. Capitol in Washington, DC. Trump's first address to Congress focused on national security, tax and regulatory reform, the economy, and healthcare.

(Photo by Rachel Mummey for The Washington Post via Getty Images)

Grassley, who has served in the Senate since 1981, called the guidance "nonsense" and described it as "a bureaucratic effort by the Office of Legal Counsel to insulate the executive branch from scrutiny by the elected representatives of the American people."

The Judiciary Committee has jurisdiction over the Justice Department and its Office of Legal Counsel, which published the guidance last month.

Grassley said it goes against the U.S. Constitution by misrepresenting how Congress functions and trying to tell the legislative branch how to do its job. It also impedes Democratic lawmakers' ability to check up on the president, a responsibility also laid out in the constitution, Grassley wrote in a letter replete with footnotes and case citations.

"I know from experience that a partisan response to oversight only discourages bipartisanship, decreases transparency, and diminishes the crucial role of the American people's elected representatives," he wrote. "Oversight brings transparency, and transparency brings accountability."

The Justice Department declined to comment on Grassley's letter or the guidance. The White House did not return a request for comment.

The Office of Legal Counsel has not explained the impetus for publishing the opinion.

The guidance did not single out Democrats by name. Instead, it addressed information requests to executive agencies from the highest-ranking lawmaker from the minority party sitting on congressional committees, called ranking members.

The Republicans hold the majority in both the Senate and U.S. House of Representatives and therefore chair all the committees, with Democrats as ranking members.

The opinion said that agencies only have to respond to information requests from committee chairs. Ranking member requests "do not trigger any obligation to accommodate congressional needs and are not legally enforceable through a subpoena or contempt proceedings," it said.