Trump slammed for trying to 'distract' attention away from Comey hearing 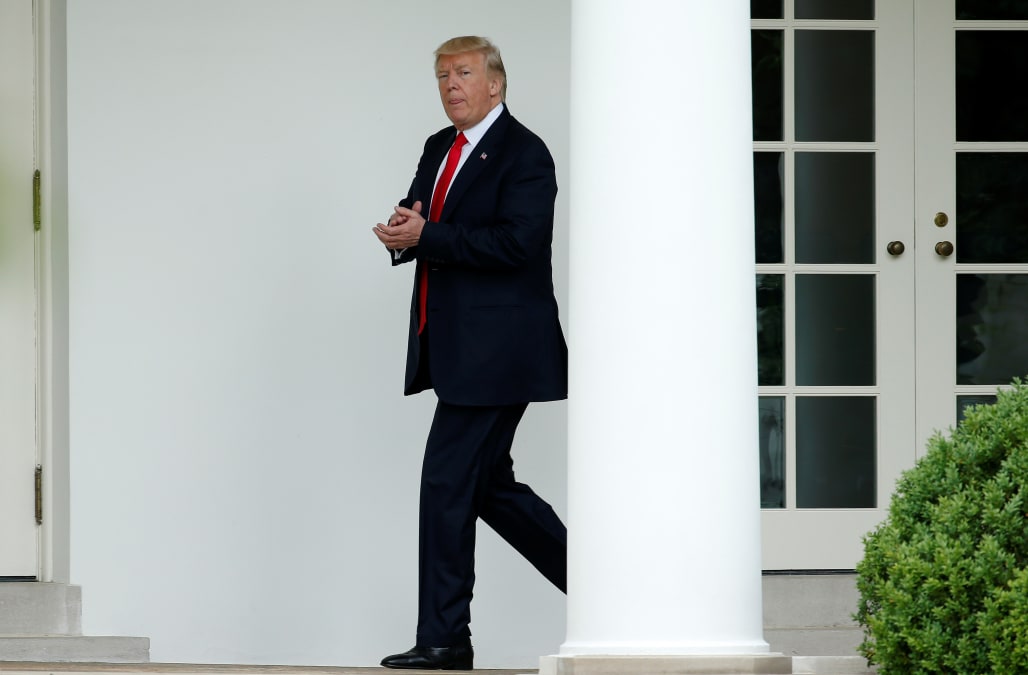 President Donald Trump has been accused of attempting to distract attention away from former FBI Director James Comey's highly anticipated testimony on Thursday.

The hearing is shaping up to be one of the most anticipated political events of Trump's first term, with D.C. insiders saying it's generating buzz unlike anything seen since the Lewinsky hearings of the 1990s -- and some believe the president is trying his best to get you not to watch.

One day before Comey's scheduled testimony, President Trump announced Christopher Wray as his replacement to head the Federal Bureau of Investigation, a move so sudden that his own staffers and press secretary Sean Spicer reportedly had no clue until he tweeted about it.

Twitter jokes on Trump's "that thing" comment to Jame Comey
Well, I try and try to forget you girl / But it’s just so hard to do / Every time you do #thatthing you do
@juliehdavis Am I the only one singing Lauryn Hill? Trump: "That thing." Comey: "That thing?" Trump: [winking] "Th… https://t.co/vGtHjsi7UV
Shot out to that boy Comeyeeze #ThatThing https://t.co/xdjW28I7x7
So what does everyone think "that thing" is? #Comey #ThatThing
The horror... #thatthing https://t.co/IwG3kWZKcA
"Because I have been very loyal to you, very loyal; we had #ThatThing you know." https://t.co/0CLuYr7v1J
James Comey mentioned #thatthing being the last thing Trump said to him. "That Thing" is COVFEFE!! https://t.co/EZGxhr2bPN
I'm calling it now, when James Comey walks in to testify his intro song will be Lauryn Hill's #ThatThing.
I can only guess #ThatThing was @realDonaldTrump and Comey punked Jeff Sessions into thinking no one could see him.
Golden Showers with Russian prostitutes #ThatThing https://t.co/YMrMOgo0uy
Up Next

"Clearly this is an effort by the president to try to distract attention from our hearings today and our hearings tomorrow," the Virginia senator said. "I think we're going to hear some pretty interesting things this morning."

Other political insiders agreed Trump making the FBI director announcement so close to Thursday's hearing was an attempt to grab the media narrative ahead of Comey's testimony.

"It is impossible to see the move as anything other than Trump throwing some chum to the news gods," Chris Cillizza, CNN's editor-at-large, wrote on Wednesday.

The president also announced he would be deliver a speech around the same time Comey is expected to testify before Congress on Thursday, offering direct counter-programming to the historic event.

"Manipulating media coverage -- and perceptions about him more generally -- is in Trump's DNA. It's who he is. It's what he does. Hence, the Wray nomination on the verge of what almost certainly will be one of the roughest two-day patches of his presidency to date," Cillizza continued.

Trump's decision to rollout his infrastructure plans, dubbing this "Infrastructure week," has also come under scrutiny as another tactic aimed at distracting away from the ongoing Russian probe.

Sen. Chris Murphy called the president's infrastructure push this week an attempt to "change the story."

"I imagine they woke up this weekend and wanted to put something else out there for people to write about other than Comey and Russia and inability to pass a health care bill, and air traffic control was it. I imagine there will be very little follow up from a policy perspective," Murphy said.