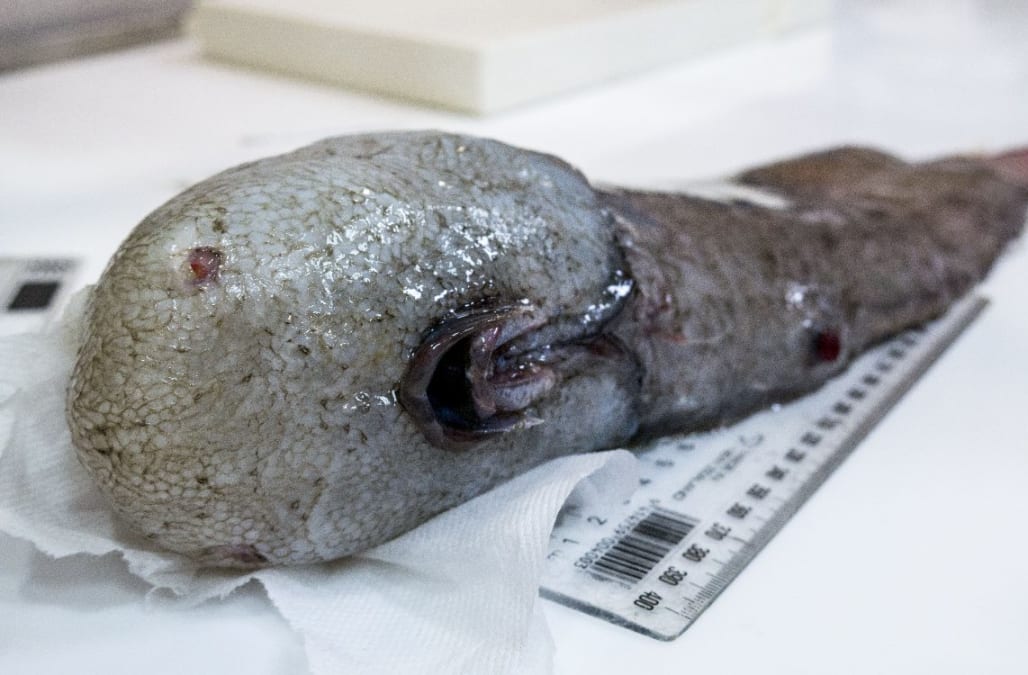 A group of scientists stumbled upon a bizarre-looking creature over the weekend while exploring a massive abyss off the Australian coast -- a large, "faceless fish."

The brownish, scaly creature that lacked nostrils, a mouth and a face, looked unrecognizable.

RELATED: See some of the rarest fish of the ocean

Rare fish of the ocean
Washington, DC - October, 5: A lion fish in a tank near a new and rare albino alligator which has taken up residence with other scary fish just in time for Halloween at the National Aquarium on October, 05, 2011 in Washington, DC. (Photo by Bill O'Leary/The Washington Post via Getty Images)
LONDON, ENGLAND - SEPTEMBER 12: Seahorses are displayed at an 'Endangered Species' exhibition at London Zoo on September 12, 2011 in London, England. The exhibition is organised by 'Operation Charm', a Metropolitan Police partnership aimed at tackling the illegal trade in endangered wildlife and runs for one month at London Zoo. Items include a 10 week old stuffed Tiger cub, the tooth of a sperm whale, Ivory carvings, and a stuffed Tiger. (Photo by Dan Kitwood/Getty Images)
A critically endangered small tooth sawfish roams its new home at Oceanworld in Sydney on August 18, 2011. Measuring over 1.5 metres in length, sawfish have adapted to live in both salt and fresh water, while their long saw-like rostrum (nose) has evolved to expertly forage for food under the sandy ocean floor. AFP PHOTO / Torsten BLACKWOOD (Photo credit should read TORSTEN BLACKWOOD/AFP/Getty Images)
BROMLEY, UNITED KINGDOM - NOVEMBER 9: *** EXCLUSIVE *** Coral in Clayton Smith's fish tank on November 9, 2010 in Bromley, London, England. The flower beds maybe bare and winter is just around the corner but one Londoner is cultivating an underwater garden of the tropical kind. 'Reef Farmer' Clayton Smith, owner and founder of Reefworks, has turned his home-made coral tank into a treasure trove by creating a spectacular international coral farming business. Stretching 30 ft in length these 14 giant tanks contain over 150 species of exotic multicoloured coral from all over the world. Nicknamed 'The Bromley Reef' the colossal farm houses 2000 living colonies that are grown and then sold to enthusiasts in the UK and around the world. Now he is taking his quest for rare coral to another level by farming one of the richest but most delicate ecosystems in the world - the coral reefs of Indonesia. The marine biologist is so concerned with the impact of the unethical trade in endangered species. Coral reefs are found throughout the oceans of the world from the polar regions to the tropics. Although they cover only 0.2 percent of the ocean floor they provide a habitat for 25 percent of the ocean's wildlife. Scientists fear that unless drastic action is taken to conserve coral, up to 70 percent of reefs could be destroyed within the next 20 to 40 years. (Photo by Laurentiu Garofeanu / Barcroft Media / Getty Images)
SOUTH AFRICA - UNSPECIFIED DATE: ***EXCLUSIVE*** Sharks follow the Sardines. It is billed as the greatest natural show on earth and from these stunning images it is easy to why. Encompassing diving gannets, sharks, dolphins and brydes whales this is the increasingly rare and unpredictable sardine run. Underwater photographer Jason Heller travelled to the wild coast of South Africa this July to capture one of the unique predatory shows. Amazingly for Jason, who has been involved in underwater photography since 2001, this was his first experience of the sardine run. Followed by thousands of hungry dolphins, sharks, sea birds and seals, the sardines protect themselves from this onslaught by forming into giant balls called 'bait balls' which can measure as large as 65 feet, or 20 metres, in diameter. Using micro light planes to try and spot and relay the co-ordinates of the masses of fish and dive bombing gannets. (Photo by Jason Heller / Barcroft Media / Getty Images) (Photo by Barcroft Media / Getty Images)
Red handfish, ThymichthysÂ politus, rare and critically endangered species known only from this area, Southeastern Tasmania, Australia (Photo by: Auscape/UIG via Getty Images)
Ziebells handfish, Brachiopsilus ziebelli, very rare species found only in southeastern Tasmania, Tasmania, Australia (Photo by: Auscape/UIG via Getty Images)
SYDNEY, AUSTRALIA: An extremely rare fluorescent yellow Port Jackson shark is shown to the public for the first time at the Sydney Aquarium, 30 March 2004. The two-year-old male named 'Mango', who has spent the last few months in quarantine at the Aquarium after being discovered caught up in a fishing net, derives its unusual bright yellow colouring from a rare form of albinism, a problem for the sharks as they normally lie on the seabed trying to camouflage themselves from predators. AFP PHOTO/Greg WOOD (Photo credit should read GREG WOOD/AFP/Getty Images)
Humphead wrasse (Cheilinus undulatus), endangered species. Ras Muhummed, Red Sea, Egypt. (Photo by Auscape/UIG via Getty Images)
Up Next

The group of 40 scientists from Museums Victoria and the Australian government's Commonwealth Scientific and Industrial Research Organisation (CSIRO), discovered the underwater creature while traveling on a research vessel as part of a month-long journey.

They caught the fish nearly 13,000 feet below ocean level in the Jervis Bay Commonwealth Marine Reserve, where the water temperature was only slightly above freezing.

"Everyone was amazed," one of the CSIRO scientists wrote in a blog post Tuesday. "We fishos thought we'd hit the jackpot, especially as we had no idea what is was."

But after eel expert John Pogonoski, who also works for CSIRO, had a look at tissue samples and images of the fish, he came to discover that scientists hadn't discovered a new species after all.

The team actually rediscovered a fish, dubbed the "Faceless Cusk," that had not been seen on record for more than a century.

The "new" species is a cusk eel that goes by the scientific name, Typhlonus nasus, which translates to "blind hake" in Greek.

"So, it's not a new species, but it's still an incredibly exciting find, and we think ours is the largest one seen so far," the scientist continued in the post.

More from AOL.com:
Scientists discover a species of snakes that hunt in packs
Scientists figure out how flamingos stay steady on one leg
Record-setting bass caught with McDonald’s chicken nugget