Women in some countries can't pass down citizenship 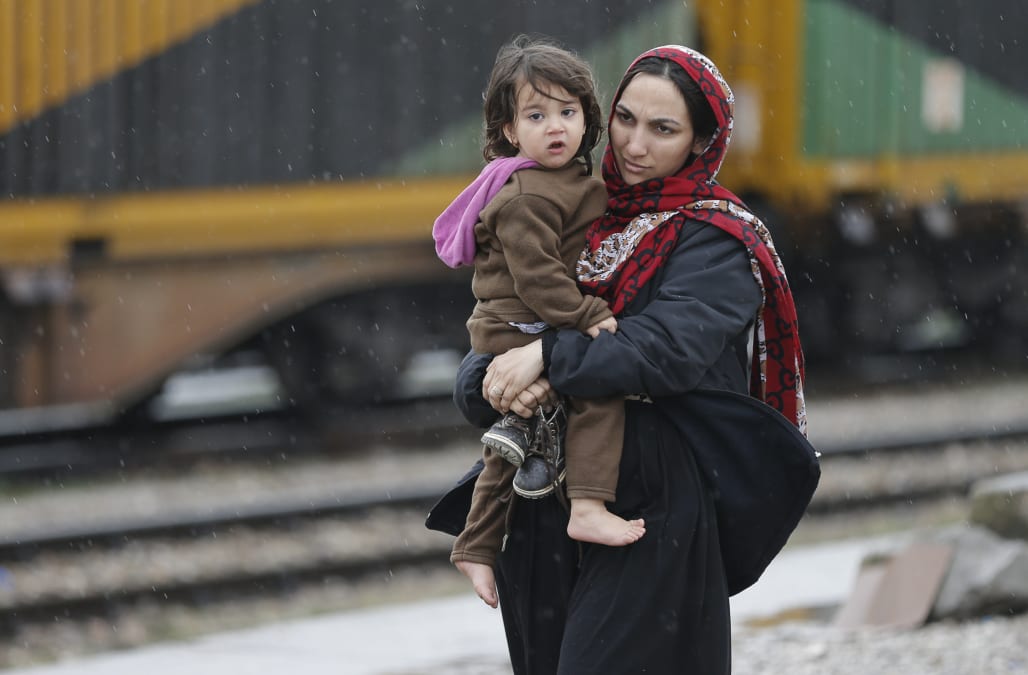 When a child is born, they can inherit any number of things from their mother: her smile, her eyes, her nose. But in many cases, her citizenship is not one of those things.

That's because in 26 countries, women can't pass down their citizenship to their children.

See the list of countries with strict nationality laws:

In this photo, a Bahamian mother holds her baby girl on June 15, 2012, in Nassau, The Bahamas.

In this photo, a Bahraini Shiite Muslim child takes part in a ceremony commemorating Ashura in the village of Sanabis, west of Manama, on October 22, 2015.

In this photo, Prince Harry visits the Nightingale Children's Home on November 29, 2016 on the Caribbean island of Barbados.

In this photo, Muslim students in Brunei wait to greet Sultan Hassanal Bolkiah on July 25, 2010.

In this photo, a woman prays with her child during a Sunday service in a village near Bujumbura, May 31, 2015.

In this photo, children eat ice-cream on a commercial street in southern Tehran's Molavi neighborhood on May 11, 2017.

In this photo, a displaced Iraqi woman carries a child upon leaving their homes west of Mosul on May 26, 2017, as government forces continue their offensive to retake the city of Mosul from Islamic State group fighters.

In this photo, children play with snow after a heavy snowstorm in Amman, Jordan, on December 13, 2013.

In this photo, a baby lies on a bed in the maternity ward of the Nawerewere Hospital on South Tarawa in the central Pacific island nation of Kiribati May 25, 2013.

In this photo, a boy looks on as Kuwaiti men pray at the Sunni Grand Mosque in Kuwait City early on July 2, 2016.

In this photo, a Christian Maronite priest marks a cross with ash on the forehead of a child at a church in the coastal city of Byblos north of Beirut, on February 27, 2017.

In this photo, Liberian children watch their friends play soccer on the outskirts of the Liberian capital Monrovia, August 28, 2005.

In this photo, a girl wearing traditional costume poses for a picture during Children's Day celebrations at a school in Benghazi, Libya on March 21, 2016.

In this photo, preschooler Nuranisya Alihasdi, 6, stands at the door of her classroom during the first day of school in Putrajaya, outside Kuala Lumpur, on January 4, 2012.

In this photo, a woman wraps her sleeping baby on her back in Niomel, in the Guidimakha region, Mauritania June 3, 2012.

In this photo, children observe the Newari New Year parade that falls during the Tihar festival, also called Diwali, in Kathmandu, Nepal November 12, 2015.

In this photo, Omani women wait inside a polling station before voting in Muscat October 27, 2007.

In this photo, a child attends the 'Asterix and Obelix 3D' Premiere during the 2012 Doha Tribeca Film Festival at o n November 23, 2012 in Doha, Qatar.

In this photo, a Saudi girl enjoys snow in the new Snow City at Al Othaim Mall in Riyadh, Saudi Arabia July 26, 2016.

In this photo, Kadidiatu Swaray, 18, left, and her friend Mabinty Bangura, 15, arrive for class at the Every Nation Academy private school in the city of Makeni in Sierra Leone, April 20, 2012.

In this photo, an internally displaced Somali woman sits with her children outside their family makeshift shelter at their camp in Somalia's capital Mogadishu March 5, 2017.

In this photo, children cross a body of water to reach a registration area prior to a food distribution carried out by the United Nations World Food Programme in Thonyor, Leer state, South Sudan, February 25, 2017.

In this photo, a nurse plays with an orphan on March 1, 2012 in Bulembu, Swaziland.

In this photo, a Syrian girl smiles as Syrian civilians and members of opponent forces arrive at the Maarrat Misrin town of Idlib after they were evacuated from Al-Waer district of Homs, in Idlib, Syria on May 17, 2017.

In this photo, a health center is seen in Lome, Togo.

In this photo, a Muslim boy prays inside Sheikh Zayed mosque in Abu Dhabi April 7, 2009.

Several of these countries are crafting initiatives for women's empowerment and gender equality — except when it comes to letting them pass down their citizenship.

SEE MORE: Women's Empowerment In Pakistan Is Spreading Via Motorcycle

Advocates pose the question: Can you really have gender equality if women aren't allowed such a basic right?

Catherine Harrington of the Global Campaign for Equal Nationality Rights said: "In our interconnected world, you know that where there's growing inequality intention in any country in the world, that's ultimately going to have ripple effects everywhere. And so ensuring equality under the law, particularly under something as fundamental as access to citizenship itself, is really critical to peaceful, stable societies."

Despite creating a new constitution in 2015, Nepal has been accused of gender discrimination when it comes to assigning citizenship. The child of a Nepali woman married to a foreigner can only become a citizen through naturalization. If a Nepali man marries a foreigner, any child he has is automatically a citizen.

As for Gurung, whom we mentioned earlier, after a legal fight for two years, a Nepalese court said she could pass down her country's citizenship to her daughters. She wrote she is still wants to fight for others affected by laws in Nepal.

"If I could get my citizenship certificate, if my children could study. ... My life has been ruined, but I hope to make their future brighter," said Sapana Pariyar, who lives in Nepal.

No particular region is more likely to have these kinds of laws; they're found everywhere. And everywhere they exist, those affected suffer the same consequences.

Prior to its reform in 2010, the Kenyan constitution discriminated against women who had children abroad. This made obtaining education in Kenya difficult for those children.

"When I went they told me: 'You're not even Kenyan; your dad is not Kenyan.' At that time I was in college. I was supposed to sit for my exams, and you're not allowed to do the exam if you don't have the ID because you're considered not Kenyan," said Kenya resident Francine Odoi.

While Kenya has since reformed its laws, her experience before the change is similar to what others still face.

According to the U.N. Refugee Agency, these kinds of discriminatory nationality laws are often at the root of statelessness.

And statelessness means no birth certificate, no passport and no way to leave a country. So if conflict arises, stateless people are stuck.

"As a Syrian woman, it's very difficult for me to give my nationality to my children. And that in and of itself is a problem. However, when you add a conflict situation to this issue ... you can imagine the multitude of scenarios where a child cannot prove a legal link to the father," said Zahra Albarazi, senior researcher at the Institute on Statelessness and Inclusion.

SEE MORE: The Map That Shows How Complicated Syria's Front Lines Are

Women affected by discriminatory nationality laws are often citizens themselves. But because they can't pass down their citizenship and property or provide for their families, they say they feel degraded.

"It really takes a significant toll on the emotional well-being of affected individuals," Harrington said.

While women are the main victims of these laws, some countries have loopholes that prevent single fathers from passing down citizenship.

One of those countries? The U.S.

That case references an act from 1952. It doesn't let an unmarried father pass down U.S. citizenship to his child if the father didn't live in the U.S. for at least 10 years before his child was born.

Advocates say there are benefits for countries that move to change their laws.

"Instances where individuals might not be convinced of the necessity to reform these laws on the human rights violations that exist because of these laws and the impact — the severe impact that these laws have on affected families — we can talk about with governments the impact it has on the country as a whole toward sustainable economic development," Harrington said.

These laws may be inspired by past colonial rule. But as advocates look ahead, they say they're hopeful that nationality laws won't be barriers to citizenship in the future.