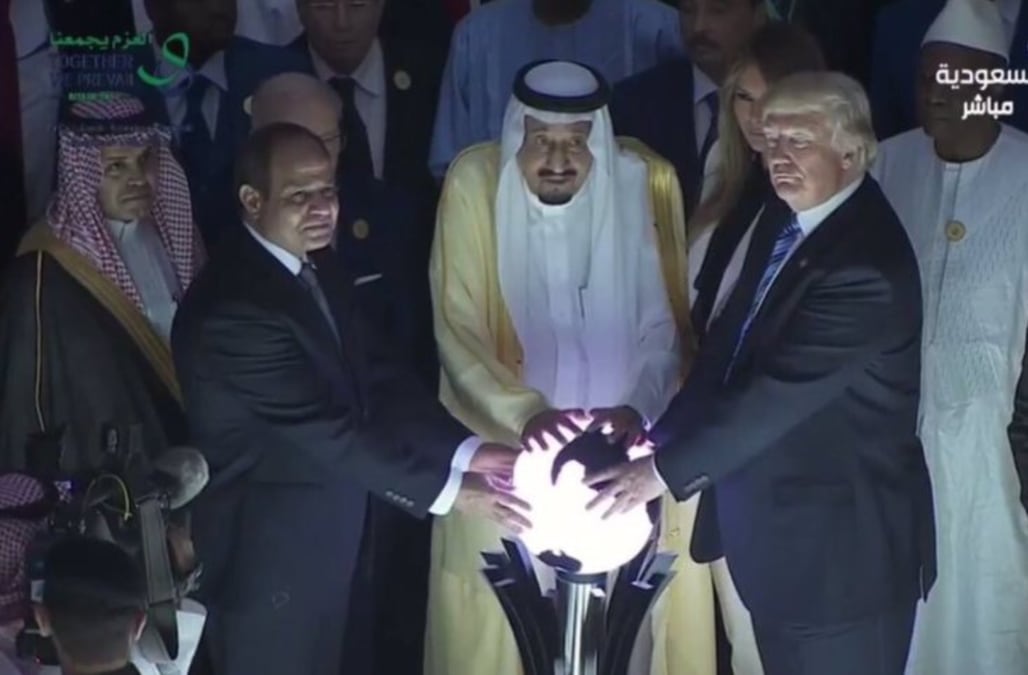 The initial meme-worthy photo of the president and King Salman clasping a glowing orb emerged during his trip to Riyadh to attend the opening event for the new Global Centre for Combating Extremist Ideology. While there, Trump, King Salman and Egyptian President Abdel Fattah el-Sisi placed their hands on an illuminated globe the size of a kickball for the opening ceremony.

The startling photograph, which prompted comparisons between Trump and comic book villains, quickly garnered attention and was apparently found just as amusing by the prime ministers of Norway, Finland, Sweden, Denmark and Iceland, as it was by the internet.

According to the Nordic leaders, the glowing orb "loses power and is somewhat less threatening on these latitudes."

Though the five leaders were holding a soccer ball instead of an orb, the comparisons bewteen the two images did not go unnoticed by Twitter.

Brutal... the Nordic prime ministers' recreating Trump's orb photo. Or they like soccer. I don't know, but the mocking angle plays better. pic.twitter.com/MwL0e7v1Qq

The Nordic version of the Trump-Saudi glowing orb pic! ;-) https://t.co/kFQE16cui2

Social reactions to Nordic leaders trolling Trump
@astroehlein Erm are they making a reference to a certain other globe-based photo?
@astroehlein @Euan_MacDonald the ørb.
Brutal... the Nordic prime ministers' recreating Trump's orb photo. Or they like soccer. I don't know, but the mock… https://t.co/T2T9WBTMc2
Trolling level: INTERGALATIC MASTER OVERLORD OF THE UNIVERSE https://t.co/3nxQ45nGWu
Don't forget that trolls originated from the Nordic regions https://t.co/0wbyJXH0aL
nordic prime minister meeting. the orb of world domination loses power and is somewhat less threatening on these la… https://t.co/xPie8vEHmc
Up Next

More from AOL.com:
Veil or no veil? Why Melania Trump wore a Mantilla at the Vatican
Pentagon officials reportedly displeased with Trump’s mention of US submarines to Philippine President Rodrigo Duterte
Trump budget cuts would make it 'impossible' for UN to work