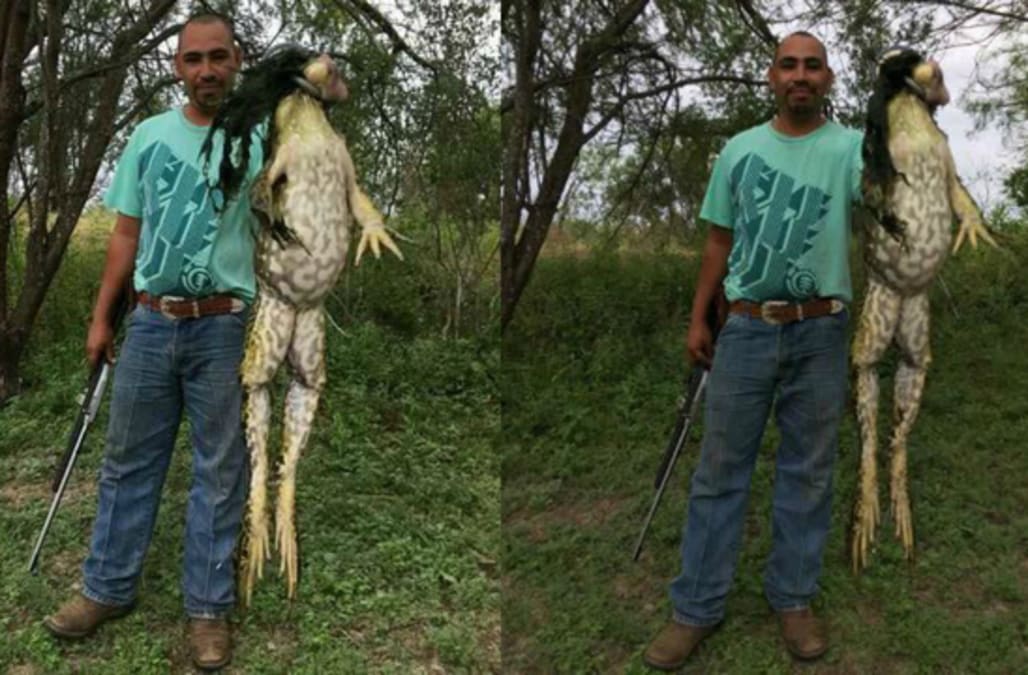 Photos of a man holding a monster-sized frog he reportedly caught in a Texas pond are going viral online.

Steve Lightfoot, a spokesman for the Texas Parks & Wildlife Department, confirmed to Chron.com that the photo is not photoshopped. However, he said the picture is still misleading.

"It's not as bigly as it appears," spokesman Steve Lightfoot said. "[It's an] optical illusion created by extending frog toward the camera – similar to what you see with fishermen holding up fish to make them appear larger. Still a big bullfrog, though."

See photos of your average-bullfrog for comparison:

Bull frogs
American bullfrog (Lithobates catesbeianus) full profile with vivid eyes - male
Bull Frog
Bull Frog
Bull Frog
Design Pics RF
Bullfrog in the water of a swamp
a bullfrog hides in the algae at a pond near or in the Moraine View State Park, LeRoy Illinois
bullfrog on leaf.
Up Next

According to Snopes, who debunked similar claims of a 42-pound bullfrog in 2015, the American bullfrog is the largest of all North American frogs and can weigh up to 1.5 pounds. But even the world's largest frog, the Goliath Frog, meets shy of the claim's requirements, weighing an average of 7 pounds.

SEE ALSO: Dear God, why are there so many snakes in this ball?

Either way, the internet remains in disbelief of the massive frog.

More from AOL.com:
Men arrested after forcing alligator to chug beer on Snapchat
It's World Turtle Day, so here are a bunch of adorable turtles
Lonely penguin tries to find love on 'Plenty of Fish' dating website