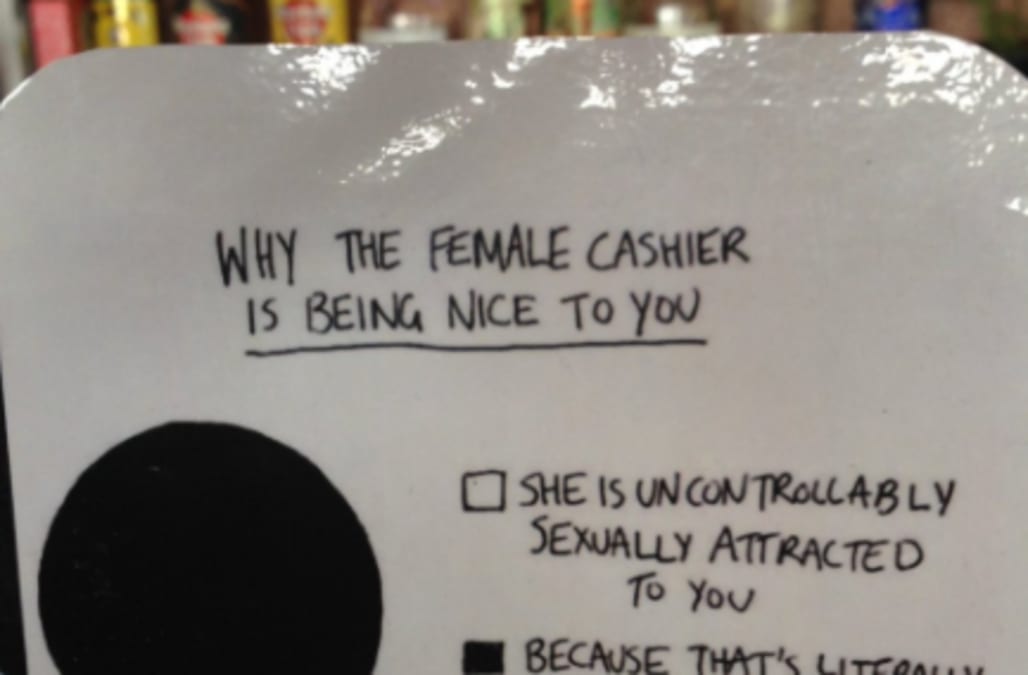 It's no secret that a large part of any job in the customer service industry involves being nice to people.

So when a few creepy customers at The Beer Cellar, a pub in Exeter, England, began confusing female staff members' friendliness with sexual advances, the bar expertly shut them down with a single sign.

In order to end any and all confusion surrounding the topic, the bar put up a simple pie chart on their cash register to help customers understand exactly why female cashiers are being nice to them.

This is definitely our favourite sign in the bar. Also if dudes could stop trying to kiss our female bartender's hands that would be great. pic.twitter.com/C1Lf8KNe1Q

The pub shared a photo of the sign on Twitter, adding, "if dudes could stop trying to kiss our female bartender's hands that would be great."

The hilarious message has already racked up more than 51,000 likes and has been retweeted over 22,000 times since it was posted on May 25.

But no matter how funny the sign may be, it also highlights the serious sexual harassment problem workers in the hospitality industry deal with on a daily basis.

Beer Cellar bartender Lauren Dew told MUNCHIES that the sign was created in response to abuse she and her co-workers recently experienced at the pub.

"We put it up a few months ago after a pretty rough weekend," she told the outlet. "We had to toss out a guy who was harassing myself and another female bartender."

"We've thrown out people for groping staff, and I've had to be walked home because some guy was waiting outside for me one night," she continued. "Don't get me wrong, 98 percent of people are lovely, but it is more common than it ought to be."

More from AOL.com:
Homeless man gives harrowing account of helping victims after Manchester suicide bombing
What its really like to be a child in North Korea
The 22 year old who saved the world from a malware virus has been named