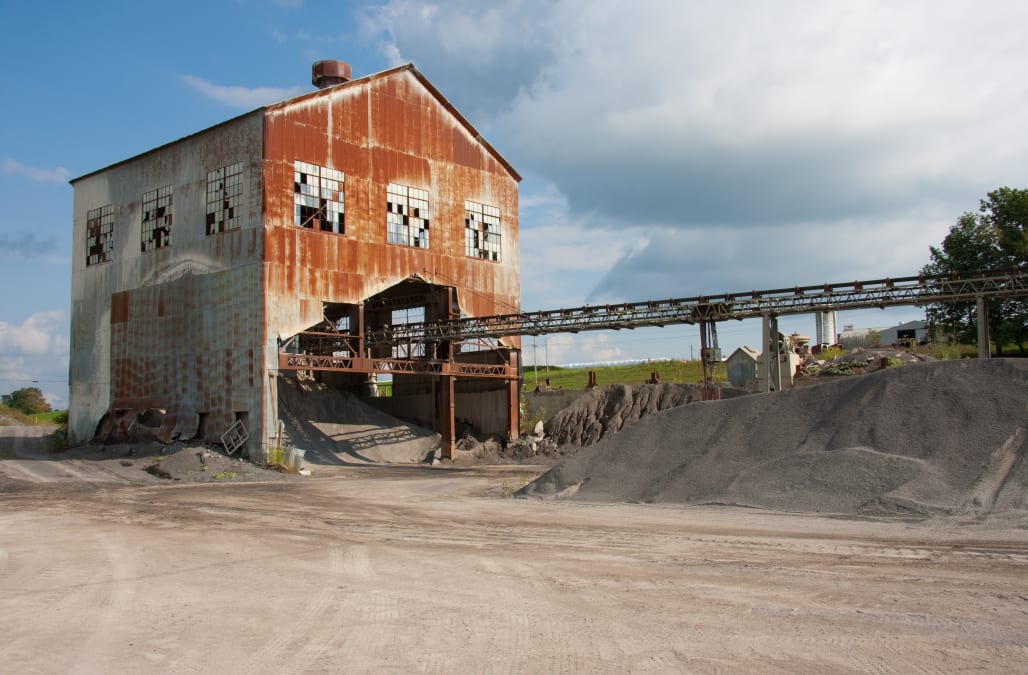 In an election that will spur hundreds of Ph.D. dissertations over the coming decade, one thing is already clear: President Donald Trump's courting of the Rust Belt was a key factor in his victory over Democratic contender Hillary Clinton. Despite a victory in the popular vote of 3 million, Clinton lost the Electoral College and the presidency.

Trump promised the Rust Belt — a loose collection of former manufacturing hubs including Pennsylvania, West Virginia, Ohio, Michigan, Indiana, Illinois, Iowa and Wisconsin — that he would bring jobs back to their decaying factories, and take on Washington. And it worked. Voters in those states, largely whites without college degrees, were key in his electoral victory over Clinton. Voters in many of those states ended up with far more voting power than states like California.

Time will tell if Trump can reverse those states' fortunes, but in the meantime, many of the states in the Rust Belt are dying slowly. They're losing population rapidly, with their average ages rising. And predictions for the 2020 Census show that, with those population losses will come less political power.

Mandated by the Constitution to occur every 10 years, the next Census in 2020 will count residents of each state in the U.S. Those counts will be used to redistribute votes in the Electoral College, and to redraw congressional districts in each state -- those midterm changes effective for the 2022 elections. The first time the new numbers will be used in a presidential election will be 2024.

Specifically, projections from Election Data Services based on the latest annual Census estimates found that the biggest winner should be Texas, which stands to gain three or four electoral votes with the 2020 Census. Florida should gain two. Arizona, Colorado, North Carolina and Oregon should each gain one. This means that key swing states such as Florida, Colorado and North Carolina will only gain political power.

The losers appear to be largely Rust Belt states: Illinois, Michigan, Minnesota, New York, Ohio, Pennsylvania and West Virginia. Along with Alabama and Rhode Island, each stands to lose one electoral vote. Wisconsin is only 70,000 people away from joining the list of losers.

Of course, these projections aren't set in stone. Unexpected events can have large impacts on population changes in the U.S. For example, the earliest projections for the 2010 Census were thrown off by Hurricane Katrina, which resulted in a steep and unexpected population change for Louisiana, and by the economic collapse during the Great Recession of 2007-09. Policy changes also can have an effect, particularly if Trump is successful in reinvigorating the Rust Belt with new jobs, which could increase migration to those states.

While it's tempting to say these Rust Belt losses, coupled with gains in California, could benefit the Democratic Party, it's more complex than that, says Thomas Holbrook, a political science professor at the University of Wisconsin.

"Growing populations don't necessarily benefit the party that is historically strong in that state by giving more electoral votes because the people moving there might be different politically," he says.

In his 2016 book, Altered States, published by Oxford University Press, Holbrook has isolated three factors which change states politically — international migration to the state, increase in populations with advanced degrees and increased migration from states that have different political views.

The international population of U.S. residents is expected to grow nationally, according to the Census Bureau. In 2000, 11 percent of the U.S. population was born in another country. In 2020, when the Census is taken, that number is expected to be 14 percent. By the Census projections for 2060, it will be 18.8 percent.

RELATED: Gilded-Age homes for sale in the Rust Belt

This 4,800-square-foot brick Colonial was built in 1914 for R. Hirt Jr., the founder of a chain of specialty retailers, including one that was located in Detroit’s historic Eastern Market.

The home has been restored and updated with a new kitchen and a finished family room in the basement. It still has the original ornate paneling in the study, a marble-tiled foyer and hardwood floors.

This 13,819-square-foot mansion was a wedding gift from industrialist Edward Brooke II to his bride, Anne Louise, in 1888.

The Brookes had a house in Philadelphia, but oversaw iron works, a steel foundry, manufacturing, machine shops, utilities, banking, land and railroad businesses in Birdsboro near this home. The 42 rooms are restored, and the home is listed for $1.99 million.

This 10-bedroom mansion was built in 1887 as a summer country estate for railroad and banking executive Frederick J. Reynolds. Since then, it has been owned by several prominent families, including an oil-businessman, L.M. Ludwig, and Jay K. Secor, the president of the Citizens Ice & Cold Storage Co.

It has been used as a bed and breakfast since a 1980s renovation, but financial hard times have forced a sale. It’s being offered for $284,777.

Find homes for sale in the Old West End.

This 5,285-square-foot home and second two-story guesthouse was built by the prominent Kelker family that at one time ran a local hardware business and, later, the local bank, gas company, power company, phone company and furniture manufacturer.

The home needs updating, but the original molding, large rooms, fireplaces and architectural details carry reminders of its opulent past. It’s for sale for $385,000.

Pioneering builder Kermode Gill and his brother built many of Cleveland’s most important commercial and government buildings during the industrial age. This Elizabethan Tudor belonged to Gill, who built it in 1910, with coffered ceilings and green Italian marble.

More recently, the home was used in the film “Captain America: The Winter Soldier.”

This historic home was commissioned by Oliver Kaufmann, whose family established the department store Kaufmann’s in Pittsburgh. It’s been extravagantly restored to include a gourmet kitchen with two dishwashers, a master bedroom with a big dressing room and “European-inspired” bathroom, and a beautiful outdoor space.

New York Gov. Roswell P. Flower, who made a fortune in finance and real estate during Watertown’s rise as an industrial and commercial center, built this home as an elaborate wedding gift for his daughter, Emma.

The 14,083-square-foot home has been converted into eight apartments. It’s listed for $1.5 million.

Here’s a project. This 3,895-square-foot home was once owned by Youngstown’s affluent Manchester family, but has fallen on hard times and been converted to a triplex. It’s listed for $17,000, after selling last year at the rock-bottom price of $6,000.

Check out more homes for sale in Wick Park.

This historic Victorian mansion was built in 1892 by a businessman, Abbott S. Griggs. Besides a small sleeping porch that was added on, the home is much like it was then, but with modern appliances. It’s been used in recent years as a bed and breakfast.

The home was one of the first in the area to have electricity. Griggs put in electric chandeliers that remain in the home. It’s listed for $849,900.

This 1902 Colonial-style mansion in the Indian Village neighborhood of Detroit has large rooms and some updates -- like a new roof, plumbing and electrical. The listing says that if you visit its huge rooms and unused space “your imagination will be stirred and your projects will be ready to start.”

Find homes for sale in Detroit.

This grand, restored “cottage” was commissioned by the wealthy Greeff family, who made a fortune in textiles, in 1906. Later, Eileen and Gerard Ford, the founders of Ford Models, bought the home.

See homes for sale in Quogue.

At the same time, the type of immigration has changed. While European countries used to send the most people to the U.S., Latin America and Asia lead the way now, and many of those immigrants are more educated, wealthier and more likely to move to urban areas. Also, they're more likely to be Democrats.

Holbrook has already seen this in his research. States that saw the largest growths in their foreign-born populations over the past decades moved most to the left. This effect can be seen in North Carolina, a traditionally Republican state that has tipped purple due largely to its influx of educated professionals into the research triangle around Raleigh. Former President Barack Obama narrowly won the state in 2008, the first time North Carolina had voted Democratic in a presidential since 1976.

Coming off Trump's Electoral College win, opinion about the long-controversial system is more polarized than ever. A strong majority (81 percent) of Democrats say they would like to amend the Constitution to do away with the Electoral College and allow the popular vote to elect the president. Just 19 percent of Republicans say the same, according to Gallup. Among the four presidents who earned the title without a popular vote majority, two have been Republicans (Trump, plus George W. Bush in 2000) within the last few election cycles.

The 2020 Census also triggers redrawing of local maps in many states, known as redistricting, including drawing new districts in states that will gain Electoral College votes. Because the party in control of the state legislatures controls the drawing of maps in many states (and can make them more favorable to its own party), 2020 has set off an arms race to gain control of state and local contests..

The Republicans have pledged $125 million to the effort of holding on to important state legislative majorities and gaining more. Democrats also plan to pour millions into their own 2020 effort.

More from US News:
Under-Funded Census Threatens Under-Count
Trump Budget, GDP Bump: 5 Things to Know About the Economy
6 Smart Money Moves to Make Before Living on Your Own

2
Living each day with Crohn's

4
Why mornings are risky for your heart