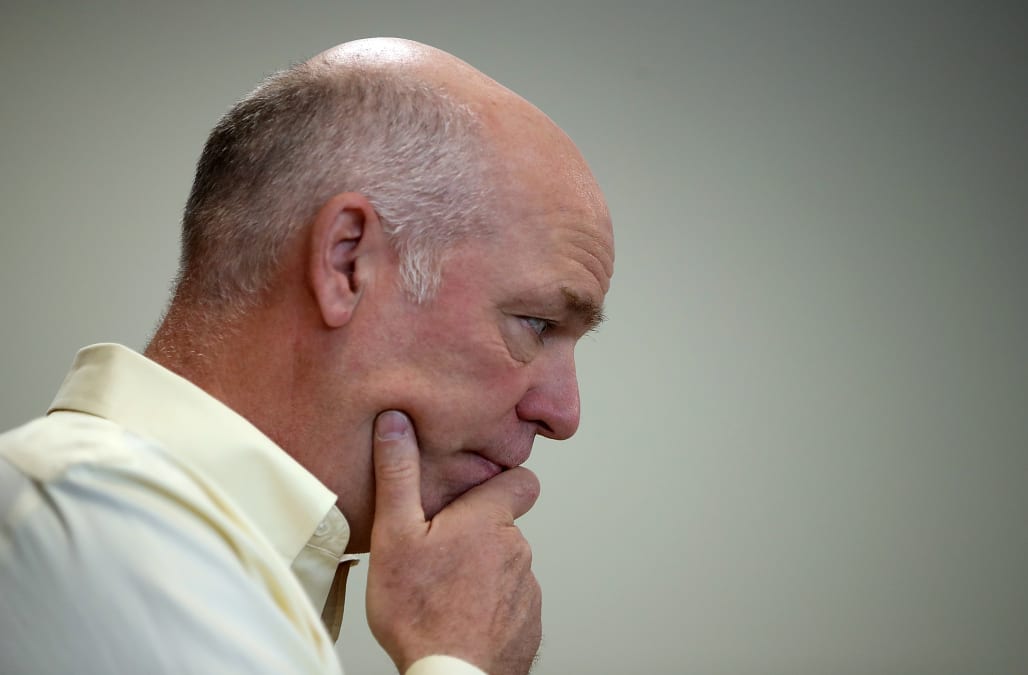 A Montana sheriff has issued a citation for misdemeanor assault against Republican U.S. House candidate Greg Gianforte after a newspaper reporter said the politician "body slammed" him, an account that was backed up by witnesses.

Gallatin County Sheriff Brian Gootkin said Gianforte was issued a citation Wednesday night. The incident occurred on the eve of Thursday's special election in which Gianforte faces a Democratic opponent for the state's open House seat.

Guardian journalist Ben Jacobs was covering an event in Bozeman and tweeted the encounter at about 7 p.m. ET.

Jacobs told MSNBC's Chris Hayes that he was trying to ask Gianforte about the Congressional Budget Office's financial analysis of the Republican health care plan when "the next thing I know, I'm being body-slammed."

"He's on top of me. My glasses are broken," Jacobs said. "It's the strangest moment that's happened in my entire life reporting."

Jacobs said he fell on his elbow. Gallatin County Sheriff Brian Gootkin said Jacobs was examined at a hospital and released.

Greg Gianforte just body slammed me and broke my glasses

Gootkin said the injuries did not warrant a felony charge. Gootkin, responding to comments made on social media, acknowledged he gave $250 to Gianforte's campaign in March but said "This contribution has nothing to do with our investigation which is now complete."

In a statement, Shane Scanlon, a spokesman for Gianforte's campaign, alleged that Jacobs crashed an interview Gianforte was giving another reporter "and began asking badgering questions," adding that "Jacobs was asked to leave."

"Greg then attempted to grab the phone that was pushed in his face," Scanlon said. "Jacobs grabbed Greg's wrist, and spun away from Greg, pushing them both to the ground.

"It's unfortunate that this aggressive behavior from a liberal journalist created this scene at our campaign volunteer BBQ," he said.

Gianforte was driven away from the scene in a Jeep shortly after the incident. Asked whether he may have committed a crime by leaving the scene, Gootkin said that was part of the investigation.

In a statement, Lee Glendinning, The Guardian's U.S. editor, said that the newspaper was "deeply appalled" and that "we stand by Ben."

Gianforte sitting in a Jeep. Sheriff's deputies were talking to him earlier. Now a medic is at the window talking with him. #bdcnews#mtalpic.twitter.com/JsT4tTYt82

In audio of the confrontation posted to YouTube by The Guardian, a voice said to be Gianforte's asks Jacobs to speak with an aide. Then loud crashing sounds can be heard.

"The last guy did the same thing. You with The Guardian?" the man asks.

"Get the hell out of here," responds the voice said to be Gianforte's.

Gianforte and Jacobs have a history: Last month, Jacobs reported that Gianforte owns about $250,000 in shares in two index funds that have investments in Russian companies that are under U.S. sanctions.

Asked about the report during a campaign event in Missoula, a spokesperson for Gianforte's Democratic opponent, singer/songwriter Rob Quist, told NBC News that he initially thought it was a joke. Quist later said he would leave the incident to law enforcement.

Alicia Acuna, a reporter for Fox News Channel, wrote on the channel's website that she and a Fox News crew were in the room setting up an interview with Gianforte when a man she later learned was Jacobs approached the candidate.

Acuna wrote that when Jacobs persisted with his questions, "Gianforte grabbed Jacobs by the neck with both hands and slammed him into the ground behind him."

Acuna wrote that Gianforte repeatedly apologized to the Fox News crew. She didn't make it clear whether the apology was also offered to Jacobs.

"To be clear, at no point did any of us who witnessed this assault see Jacobs show any form of physical aggression toward Gianforte, who left the area after giving statements to local sheriff's deputies," she wrote.

Alexis Levinson, a reporter for BuzzFeed News, who was also at the event, tweeted that Jacobs had walked into a room where a local television crew was set up for an interview with Gianforte when "all of a sudden I heard a giant crash and saw Ben's feet fly in the air as he hit the floor."

Levinson, who was standing outside the door of the room where the assault allegedly occurred, later told MSNBC that she heard angry yelling in a voice that sounded like Gianforte's.

Montana has just one representative in the U.S. House. The special election was made necessary after the president appointed Rep. Ryan Zinke to be interior secretary.

Recent support from President Donald Trump and Vice President Mike Pence underline the race's importance for Republicans, and both have traveled to the state to stump for Gianforte.

Thumbs up for a great day in Montana with @VP & @GregForMontana! pic.twitter.com/n9yH7JhdiF

Pence also recently recorded a robocall urging voters to come out in support of Gianforte.

"President Trump and I need Greg working with us in Washington to cut your taxes, secure our borders and protect your Second Amendment rights," Pence says on the recording reported by POLITICO. "Don't let Nancy Pelosi and the liberal Democrats take this seat out of Republican hands. The stakes are high and your vote will matter this Thursday."

Two Montana newspapers pulled their endorsements of Gianforte Wednesday night after news of the incident broke.

The Billings Gazette editorial board wrote "we're at a loss for words" and "we clearly made a poor choice in our original endorsement."

The Missoulian said Gianforte "showed Wednesday night that he lacks the experience, brains and abilities to effectively represent Montana in any elected office" in yanking its endorsement.