Trump budget cuts would make it 'impossible' for UN to work 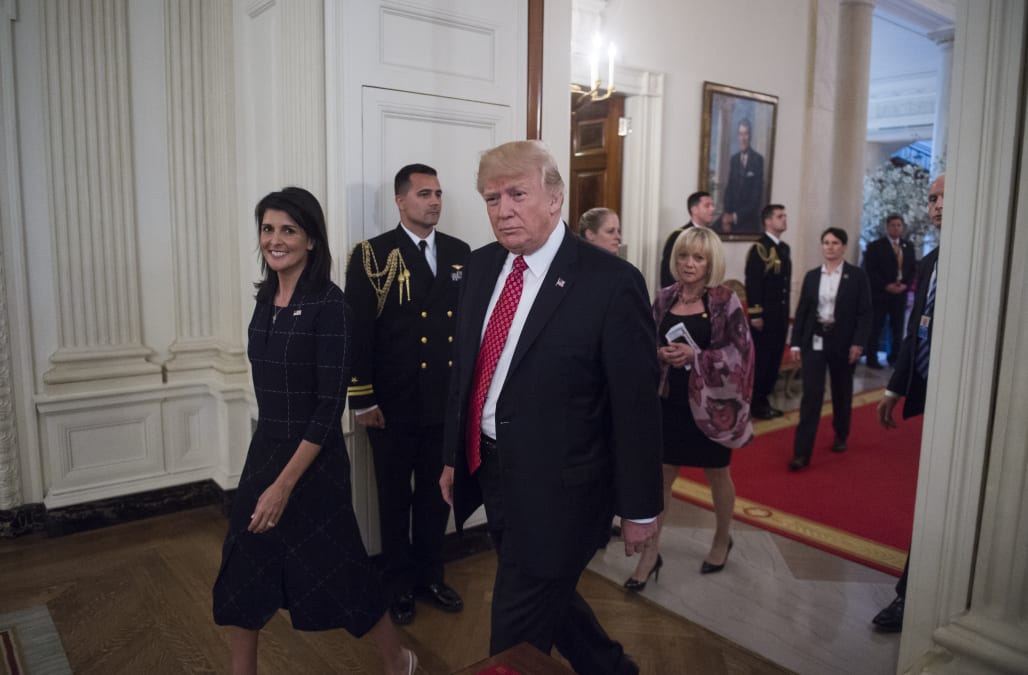 UNITED NATIONS, May 24 (Reuters) - U.S. President Donald Trump's bid to slash funding for the United Nations would make it "impossible" for it to continue its essential work, a spokesman said on Wednesday, adding that the organization was ready to discuss reform with Washington.

RELATED: Construction of the United Nations building in 1947

Construction of the United Nations building in 1947
Ceremonial demolition of two stores on First Avenue and 42nd Street takes place in New York City to prepare for the construction of the United Nations Building, July 1947. Left to right: Assistant Secretary General of the UN, Byron Price (1891 - 1981), Manhattan Borough President Hugo Rogers and Mayor of New York City William O'Dwyer (1890 - 1964). (Photo by FPG/Archive Photos/Getty Images)
Aerial view of the excavation site for the United Nations Building, New York, New York, September 1948. The area is bounded by 42nd Street on the south, 48th Street on the north, First Avenue on the west, and Roosevelt Drive on the east. Visible at the far right is the Queensboro Bridge. (Photo by FPG/Getty Images)
UNITED STATES - OCTOBER 25: Workmen putting cornerstone of the United Nations Secretariat Building in place before start of dedication ceremony. Cornerstone is engraved with the name United Nations in English, French, Chinese, Russian and Spanish. (Photo by Hank Olen/NY Daily News Archive via Getty Images)
(Original Caption) Living so near to the site of the future home of the United Nations on the East side of Manhattan gave James Rath the idea of keeping a photographic record of the building there. Mrs. Rath, (above) knits as she looks at the steel structure of the U.S. Steel's American Bridge Company. From this fire escape on First Avenue, her husband takes his pictures of the gradual growth of the U.N. community.
(Original Caption) 12/8/1948-Munhall, PA- The first steel beams for the 29-story United Nations Secretariat Building are loaded at the Homestead Works of U.S. Steel's Carnegie-Illinois Steel Corp., where they were rolled. After going through a fabrication plant at Ambridge, Pennsylvania, where they will be made into sections, the beams will be sent on to New York. Each beam measures 30 feet in length and weighs about five tons.
(Original Caption) On the Manhattan site of the future home of the United Nations, the Secretariat Building is still under construction. On the east wall, which is built entirely of glass windows, is the scaffolding and hoist tower, serving as a work elevator right up to the top on the 39th floor.
10th October 1949: Left to right: Warren Austin, Lou Chandell, President of the Fuller Construction Company, Dick Streeter, Supt., American Bridge Company, Trygve Lie, the UN Secretary General, and Alexander Rudinski, a Polish United Nations, displaying the United Nations Flag in front of the incomplete United Nations building in New York. (Photo by Keystone/Getty Images)
circa 1950: The 6000 windows of the United Nations Secretariat building in mid-town Manhattan, New York, are cleaned monthly by seven men. Window cleaner Pete Warkanes is hanging from the top left of the building. (Photo by Douglas Grundy/Three Lions/Getty Images)
May 1961: Norbert Gernavage cleans the windows of the United Nations headquarters in New York. The Chrysler Building is visible in the background. (Photo by Helmut Kretz/Keystone/Getty Images)
Up Next

"The figures presented would simply make it impossible for the U.N. to continue all of its essential work advancing peace, development, human rights and humanitarian assistance," U.N. spokesman Stephane Dujarric said in a statement.