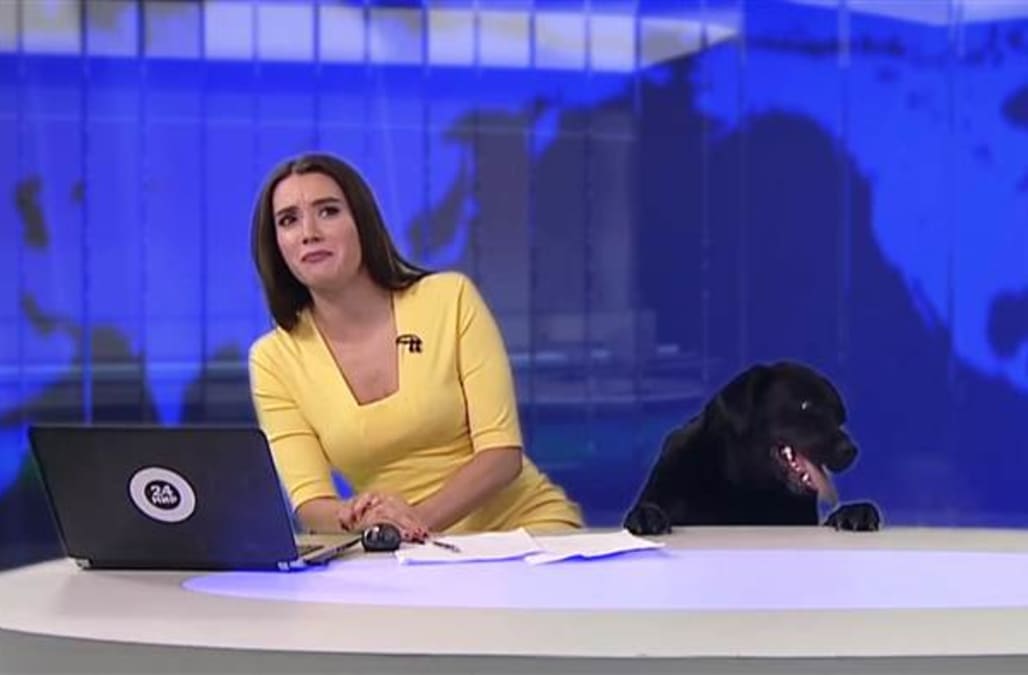 An anchor on Russia's Mir24 TV had a sweet surprise last week during her news report.

Ilona Linarte was in for a shock when a black dog walked on set while she was speaking. The incident was put on YouTube and now has over four million views:

"I've got a dog here,'' she said in Russian according to TODAY. "What is this dog doing in the studio?"

Not only does he walk around, but he jumped up and appeared over the table.

TODAY reports that the station followed up with an explanation. Apparently, the dog was a guest on another show and got loose.

Check out other animals who are troublemakers

Animals who are total troublemakers
EyeEm
Mary Holmes receives a peck on the nose from one of the birds at the Formakin Animal Training School in Oxfordshire where animals are trained for show-business appearances.
Young Olive baboons (Papio hamadryas anubis) playing with one hanging from the others tail, Nakuru National Park, Kenya
'(Original Caption) The driver of the bumpmobile at right bears left to avoid hitting two shrieking females at a London fun fair. Just a coupla human drivers, Susie the Bear remarks. The girls are Wynne Shearme (left), 23; and Marjorie Kennedy, 22.'
Lion(Panthera leo) cub playing with its mothers tail, Masai-Mara Game Reserve, Kenya. Vulnerable species.
Naughty dog - Lying dog in the middle of mess in the kitchen
A pack llama sticks out his tongue after eating some grain in Utah's Wasatch-Cache National Forest.
Raccoon relaxing on top of bird feeder
Bear in a boat with father and son
Mountain Gorilla (Gorilla beringei) adult playing with an infant. Rwanda, Africa
What a tasty fish!
Arctic tern (Sterna paradisaea) attacking an Arctic Fox (Vulpes / Alopex lagopus) protecting its nest site, Spitsbergen, Svalbard, Norway. Highly commended, MAMMALS, GDT 2011 competition
Vervet monkeys play fighting.
CAT KNOCKING OVER VASE
Corbis RM Stills
Up Next

More from AOL.com:
Amid firestorm at home, Trump to seek reset with Islamic world