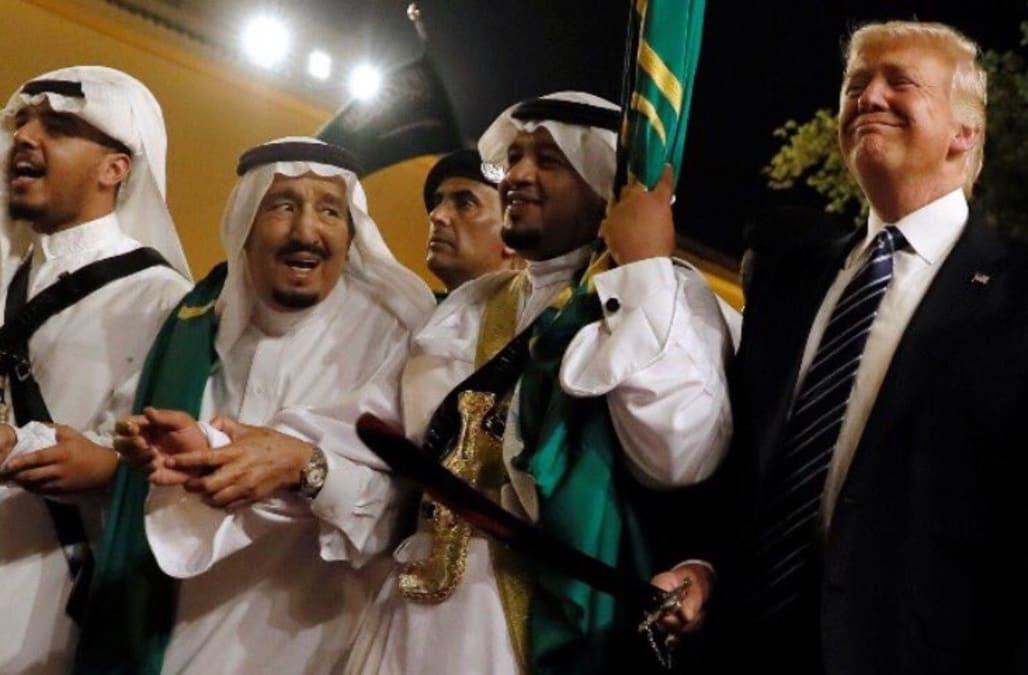 Donald Trump and other White House officials bounced along to a ceremonial Saudi sword dance in Saudia Arabia on Saturday outside the Murabba Palace, CNN reports.

Host TV captured video of the dance, which shows Secretary of State Rex Tillerson and Commerce Secretary Wilbur Ross dancing with swords on their shoulders in a line with men in traditional Saudi garb.

The traditional Saudi sword dance is known as the ardah. It combines dance, drumming and poetry, and often signifies the beginning of important events, like holidays or weddings, according to the United Nations.

In 2014, Britain's Prince Charles wore traditional robes and and carried a sword as part of his own tour of the Middle East. In 2008, former US President George W. Bush held a sword and linked arms with King Salman.

See how people have been reacting to Trump's performance:

Video shows Trump bouncing to Saudi sword dance
Team Trump at a SAUDI DANCE PARTY with singing, drums. Bannon and Priebus in middle of it. Wilbur Ross with sword… https://t.co/Ft0GK0ePZS
Trump dancing the "Ardha," traditional dance of peace after war. Saudis chanting: "We thank god things came that we… https://t.co/Wzpsnu2TDy
@BBCWorld The man has no rythm at all.....
please enjoy this footage of the secretaries of commerce and state dancing awkwardly while holding swords https://t.co/KrkoGRS8fW
Not right that they give Trump a smaller sword. https://t.co/dddSurogQy
The look on Trump's face while handling this sword---> https://t.co/yBAWrTGA9I
steve bannon looks so uncomfortable here and it rules https://t.co/GlPQJPUTts
@davidmackau I keep rubbing my eyes and trying to figure out what planet I'm on
Up Next