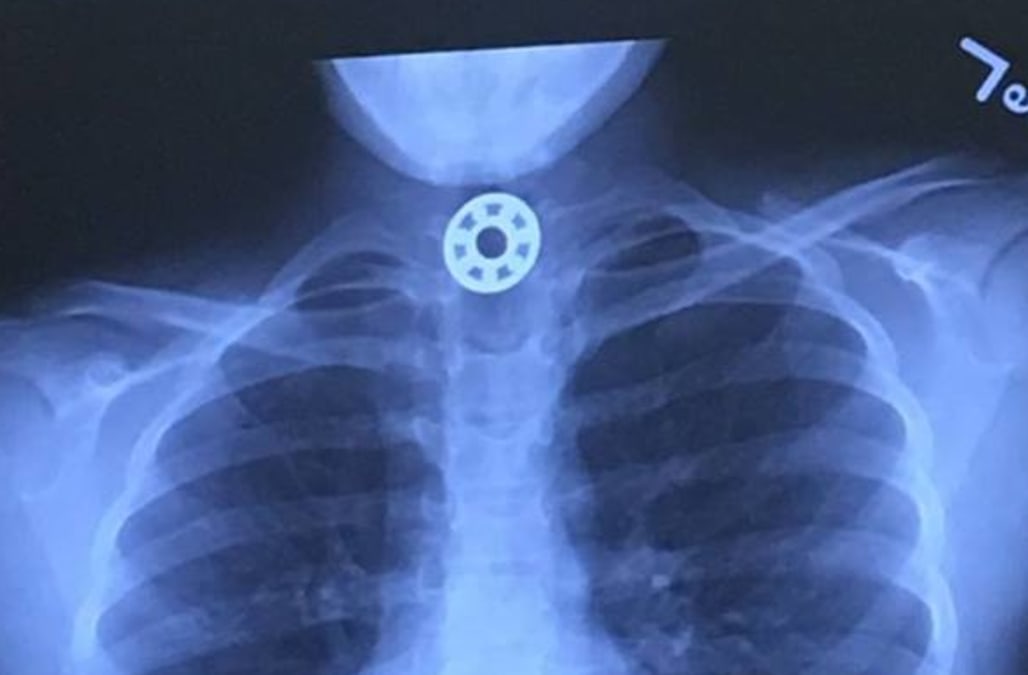 A mother of two from Texas took to Facebook on May 15 to warn others after her daughter nearly choked to death on an extremely popular toy.

The fidget spinner is a stress-relieving device created to help people who have difficulty focusing.

The three-sided contraption is designed to be rotated between a user's fingers to help them release nervous energy and relieve stress.

But mom Kelly Rose Joniec says that the wildly-popular gadgets may present a hidden danger after her 10-year-old daughter, Britton, was nearly killed by one.

"On the way home from a fun swim meet, I heard Britton make an odd retching noise in the back seat as I was driving," Joniec wrote on Facebook.

"Looking back in the mirror, I saw her face turning red and drool pouring from her mouth – she could utter noises but looked panicked so I immediately pulled over. She pointed to her throat saying she'd swallowed something, so I attempted Heimlich but there was no resistance. She said she'd put part of her fidget spinner in her mouth to clean it and somehow swallowed it."

The frantic mom says she rushed her daughter to an urgent care facility, but they unfortunately couldn't help.

"They couldn't discern where the foreign object was located – along the airway or the esophagus," she continued. "From there we got the red-light treatment via ambulance to Texas Children's Hospital. X-ray showed the spinner bushing lodged in her esophagus."

Fortunately, Joniec says the hospital's GI doctor, who is an advocate for child safety issues in toys, took special interest in Britton's case and agreed to perform the surgery.

"After multiple, very stressful attempts to place an IV, Britton was taken to surgery to endoscopically locate and remove the object," Joniec wrote. "Fortunately we had a positive outcome, but it was pretty scary there for a while...not only because of the initial ingestion, but then the concern about the composition and structure of the object, and finally, the risk with general anesthesia."

Joniec says she hopes her post, which has now been shared more than half a million times, serves as a cautionary tale for other parents.

"Fidget spinners are the current craze so they are widely distributed. Kids of all ages may be getting them, but not all spinners come with age-appropriate warnings," she wrote.

"The bushings pop out easily, so if you have young kids (under 8 yr old) keep in mind that these present a potential choking hazard."