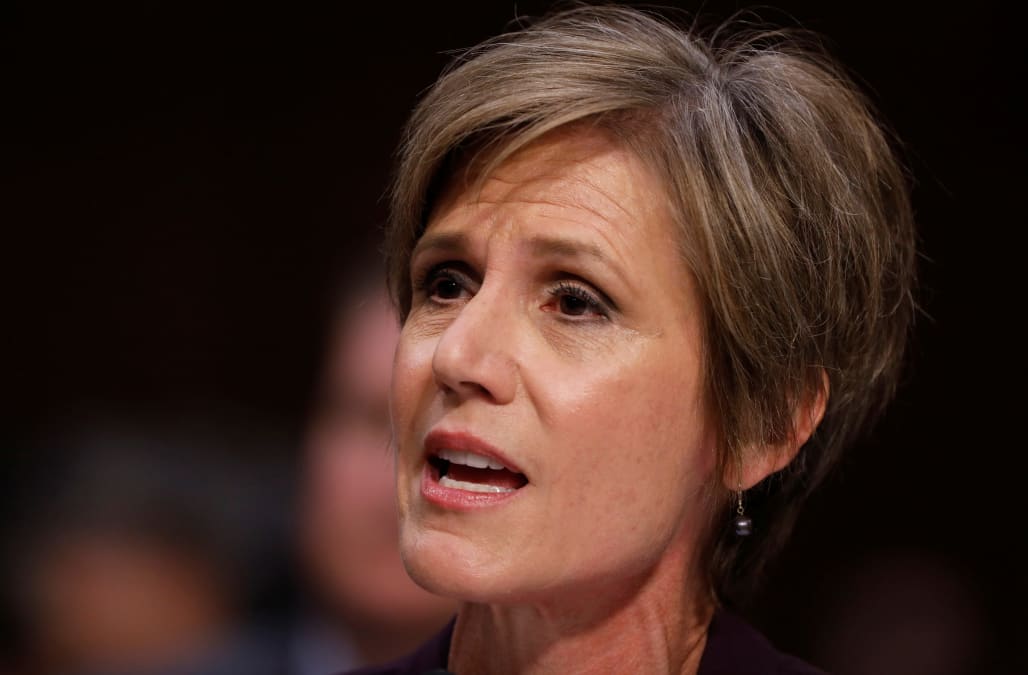 Former acting Attorney General Sally Yates said in an interview aired Tuesday that "there is certainly a criminal statute that was implicated by" ousted national security adviser Michael Flynn's "conduct."

Her comments came in an interview with CNN's Anderson Cooper, her first since President Donald Trump fired her in late January.

Those warnings went mostly ignored, as Flynn stayed on as national security adviser for the next 18 days until a bombshell Washington Post report stated that Flynn had misled Vice President Mike Pence about his communications with Kislyak. Last week, Yates testified before a Senate Judiciary subcommittee hearing on Russian interference in the 2016 presidential election and reiterated that she believed Flynn could have been blackmailed.

Deputy Attorney General Sally Q. Yates speaks during a press conference at the Department of Justice on June 28, 2016 in Washington, DC. Volkswagen has agreed to nearly $15 billion in a settlement over emissions cheating on its diesel vehicles.

U.S. Deputy Attorney General Sally Quillian Yates (L) and FBI Director James Comey are sworn in to testify at a Senate Judiciary Committee hearing on "Going Dark: Encryption, Technology, and the Balance Between Public Safety and Privacy" in Washington July 8, 2015.

Flanked by Environmental Protection Agency Administrator Gina McCarthy and Federal Trade Commission Chairwoman Edith Ramirez , Deputy Attorney General Sally Q. Yates speaks during a press conference at the Department of Justice on June 28, 2016 in Washington, DC. Volkswagen has agreed to nearly $15 billion in a settlement over emissions cheating on its diesel vehicles.

U.S. Attorney General Loretta Lynch (2nd L) delivers closing remarks to the Justice Department Summit on Violence Crime Reduction with Deputy Attorney General Sally Quillian Yates (3rd L) and other Justice Department officials at the Washington Plaza Hotel October 7, 2015 in Washington, DC. Lynch invited mayors and police chiefs from 20 cities and other federal officials to the conference to discuss the root causes of crime and strategies for reducing it.

Deputy Attorney General Sally Yates, in her office at the Justice Department, May 15, 2015, in Washington, DC. Yates, who was confirmed by the Senate yesterday, is a former career prosecutor from Atlanta.

WASHINGTON, DC - MAY 08: Former acting U.S. Attorney General Sally Yates (R) and Former Director of National Intelligence James Clapper testify before the Senate Judicary Committee's Subcommittee on Crime and Terrorism in the Hart Senate Office Building on Capitol Hill May 8, 2017 in Washington, DC. Before being fired by U.S. President Donald Trump, Yates had warned the White House about contacts between former National Security Advisor Michael Flynn and Russia that might make him vulnerable to blackmail. (Photo by Chip Somodevilla/Getty Images)
Former Deputy Attorney General Sally Yates is sworn in prior to testifying before a Senate Judiciary Committee hearing on ?Russian interference in the 2016 U.S. election? on Capitol Hill in Washington, U .S., May 8, 2017. REUTERS/Jim Bourg TPX IMAGES OF THE DAY
Former Acting Attorney General Sally Yates and former Director of National Intelligence James Clapper are sworn in before the Senate Judiciary Committee on Capitol Hill, Washington, D.C., U.S. May 8, 2017. REUTERS/Aaron P. Bernstein
Up Next

In the interview set to air Tuesday night, the first clips from which CNN published Tuesday morning, Yates did not expand upon the criminal statute she suggested had been implicated by Flynn's conduct. She did express surprise that the White House waited 18 days before firing Flynn and that Flynn continued to sit in on meetings and calls with foreign dignitaries, including Russian leaders.

She said she didn't "how the White House reached the conclusion that there was no legal issue," but "it certainly wasn't from my discussion with them."

"We expected the White House to act," she said.

Yates also denied that she was the source of the leaks to multiple media outlets about Flynn, saying she "absolutely" was not the source and had never leaked classified information to the media.

"I did not and I would not leak classified information," she said.

Cooper asked Yates for her thoughts on Trump's tweet from the day of her Senate testimony when he asked senators to "ask Sally Yates, under oath, if she knows how classified information got into the newspapers soon after she explained it to" the White House counsel.

"There have been a number of tweets that have given me pause," she said, declining to go further into her feelings on the subject.

SEE ALSO: Trump reportedly revealed highly classified information to the Russians last week that the US hasn't even 'shared with our own allies'