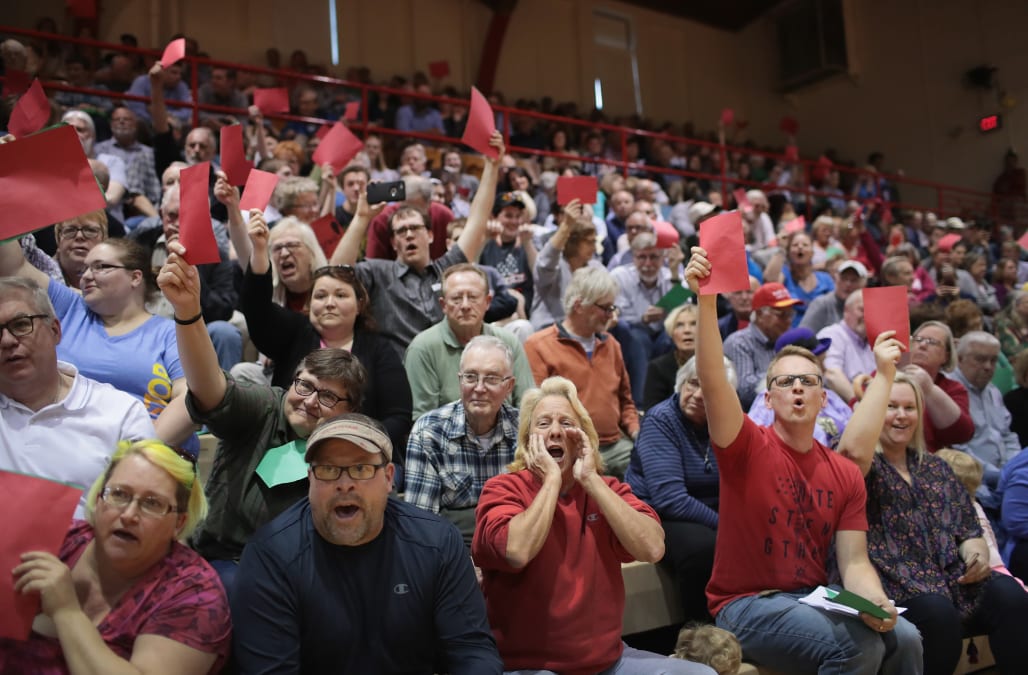 Just five days following the House Republicans getting the votes to start the repeal-and-replace process for the Affordable Care Act, those elected officials who voted yes are returning to their home districts with constituents calling them liars, urging them to do their jobs and suggesting that they even go back to college.

With the House of Representatives in recess this week, House Republicans are beginning to see and hear the fallout firsthand from angry constituents, many of whom are worried about the future of their health care, in heated town halls throughout the country.

Perhaps the most jarring example came Monday in Dubuque, Iowa, where Rep. Ron Blum was met with resounding resistance from a prescreened audience of almost 1,000 people in a high school gym, struggling to explain why he voted for the bill supporting the American Health Care Act. According to the Washington Post and KCRG, Blum, who walked out of a TV interview after refusing to expand on why his staff was prescreening audiences for the four town halls he's holding this week in his district, was peppered with comments like "liar," "do your job," and "go back to college."

The meeting prohibited holding handwritten signs, but people held up red pieces of paper to show their disapproval, which was often. Blum described the AHCA to KCRG as a touch-up of Obamacare.

His tune, however, was different during the town hall, where he said "Trumpcare" several times, according to the Washington Post.

In Plattsburgh, New York, Rep. Elise Stefanik, another last-minute yes voter of the AHCA, also faced the backlash from her constituents. According to NPR, around 250 protesters chanting "Shame. Shame. Shame" and carrying a fake coffin with a list of pre-existing conditions outside her town hall on Monday.

The demonstrations in Iowa and New York are expected to be just a taste of what the rest of their House Republican colleagues who voted yes may face in town hall meetings for the rest of the week. While some are opting out, others, such as New Jersey Rep. Tom MacArthur, will hold what may be one of the more contentious town hall meetings on Wednesday in Willingboro, New Jersey, a longtime Democratic stronghold.