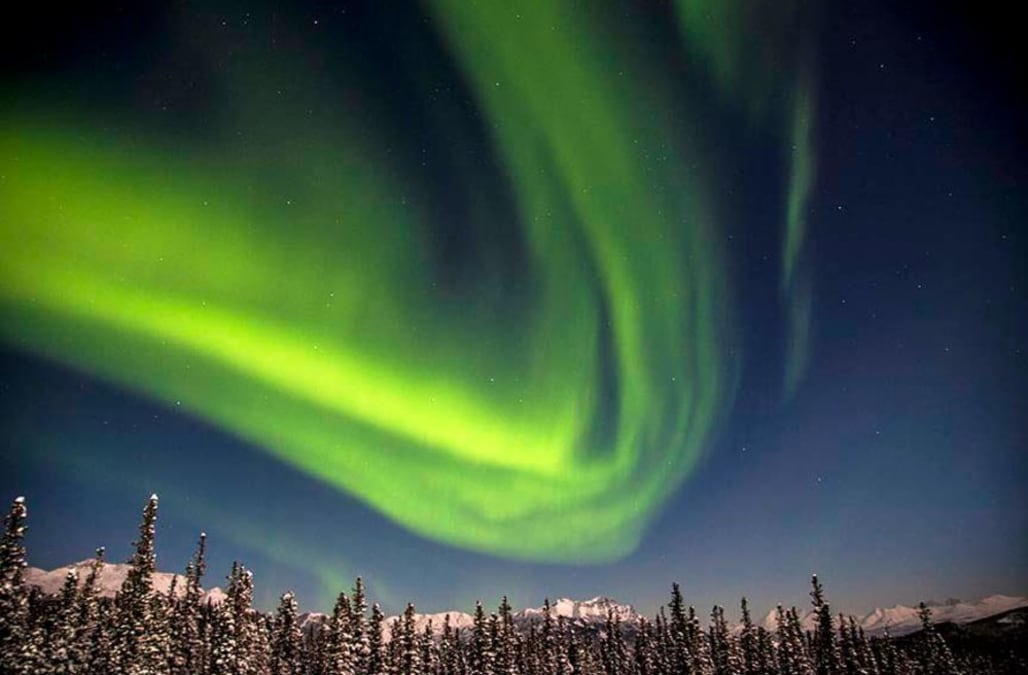 Many know Denali as the tallest peak in North America—it's the 20,310-foot behemoth formally known as Mount McKinley—but the name also belongs to the surrounding 6-million-acre Alaskan preserve. This land—arguably one of the most wild, dazzling treasures of the National Parks System—is celebrating the big 1-0-0 this year, and in its honor we've scoured government sites for archival shots. Read on.

In 1907, Charles Sheldon and Harry Karstens built a cabin on the Toklat River in what is now Denali National Park and Preserve.

(Photo via US Dept. of the Interior/Denali National Park Service)

Denali National Park and Preserve was originally created in 1917—five years after Alaska became a U.S. territory, but 45 years before Alaska became a state—to preserve Dall sheep from over-hunting. Dall sheep, a subspecies of the more well-known Ovis aries, is found only in Alaska and western Canada, where they inhabit some of most rugged alpine areas.

In 1906, Sheldon came to Alaska to study Dall sheep populations and collect specimens for study and display. Unlike the rest of Interior Alaska, Dall sheep have been barely affected by mankind and our harvest cycles, which was of unique interest to Sheldon. Additionally, conservationists and wildlife managers (like Sheldon) were particularly interested in the species because it is one of the few populations in North America that is not hunted, yet still shares its habitat with a number of large predators—grizzly bears included.

In short, Sheldon persuaded Congress to create (what was then known as) Mount McKinley National Park to facilitate the continued study of his sheep and the other species that encompass the "Big Five" on Alaska's Interior.

Dall sheep weigh an average of 130 pounds and have white fur. Their winter coats can be up to two inches thick with coarse outer hairs covering a coat of fine wool. Rams (males) have large horns that form a characteristic curl while females, called ewes, have smaller horns.

Dall sheep are prevalent throughout the high mountains within the eastern and western-most portions of the Denali National Park and Preserve. They use the ridges and steep slopes for feeding and resting, and the rocks and crags to dodge predators. They're the reason why the park was designated by the United States government.

For the mountaineers that endeavor to climb Denali, it's difficult to know when the weather is best. Denali and the Alaska Range block moist pacific storms from the south and extreme cold systems from the Arctic, creating a weather system with heavy snow and extreme cold. It's one of the most difficult weather mountains in the world.

The average expedition to Denali's summit is 17 to 21 days, round-trip and in "good conditions." But if you don't have the right provisions available to deal with Denali's wide range of temperatures and conditions, that trek could turn into a death march—even for the most experienced mountaineers. In 1989, for example, three climbers—who had previously climbed Mt. Everest—froze to death during a winter attempt to Denali's summit.

Wind is the biggest danger on Denali, and wind speeds in excess of 100 miles per hour have been recorded at 14,200 ft. That said, when the wind is calm and the sun is out, climbers have walked to Denali's summit in t-shirts.

(Photo via US Dept. of the Interior/Denali National Park Service)

It's a common misconception that Denali is filled with large mammals. An estimated 100 wolves, 350 grizzly bears, 2,000 caribou, 1,900 moose, and 1,800 Dall sheep call Denali home—not all that much considering the park covers more than 6,600 square miles.

During the summer grizzly bears go into a feeding frenzy called hyperphagia. During this time, they're compelled to eat non-stop. Berries, especially blueberries and soapberries (Shepherdia canadensis) can be found in abundance throughout Denali.

Denali National Park and Preserve has just one road, which makes it unique in the national park system. From 1923 to 1938, workers blasted rock to make room for Denali Park Road, which has 15 miles of paved street followed by 77 miles of gravel.

When tourism to the area increased, the single-road approach came under intense scrutiny. Eventually the park secured a special park regulation that restricted private vehicle travel beyond the Savage River, ensuring once and for all that Denali Park Road remained the only access point through the park.

The aurora borealis can be seen from Denali at any point during the year, but the spring equinox offers the most ideal conditions for aurora spotting. In March, the weather is oftentimes the warmest (due to greater prevalence of high pressure systems), and the likelihood of clearer skies is greater than it is in the fall—all the better to take some truly magnificent shots, even from your smartphone.

(Photo via US Dept of the Interior)

Denali is the only national park that uses sled dogs to help protect wildlife. When Charles Sheldon first visited the area to study the sheep, he hired Alaskan dog musher Harry Karstens to guide his journeys.

After Congress approved the establishment of the park, rangers were assigned a park district to patrol and a team of seven dogs. Each year, rangers aim to adopt or breed one litter of dogs to assist with their patrols.

Eight decades ago, there were over 20,000 caribou in Denali, but the herd has dwindled over the years as a result of increased predation and "weather-induced" stresses. Today, there are approximately 1,760 caribou in the Denali Caribou Herd.

Despite Denali's reputation as one of the best places in the world to see wolves in the wild, its wolf population continues to decline. Today, the number of wolves found in Denali ranges from approximately 60 to 100.

Denali's remote location means some truly breathtaking and unobstructed views of the night sky. And as much of the park is above tree-line, you can often spot star trails. Long story short, if you've been searching for the perfect place to brush up on your astronomy skills: Denali is it.

Glaciers cover one million acres, or about one-sixth of Denali National Park and Preserve. Its lakes and streams are fed by massive ice masses as high as 19,000 feet.

Because Denali sits only a few hundred kilometers south of the Arctic tundra, just eight tree species are able to grow and reproduce naturally. Three of the species (white spruce, black spruce, and lark) are from the pine family, while the remaining five (quaking aspen, balsam poplar, black cottonwood, Kenai birch, and Alaska birch) are flowering plants from the willow and birch families.

More from Popular Science:
What are national monuments and why is Trump reviewing them?
Why big animals can't take a little rain
Prevent your phone from distracting you while driving