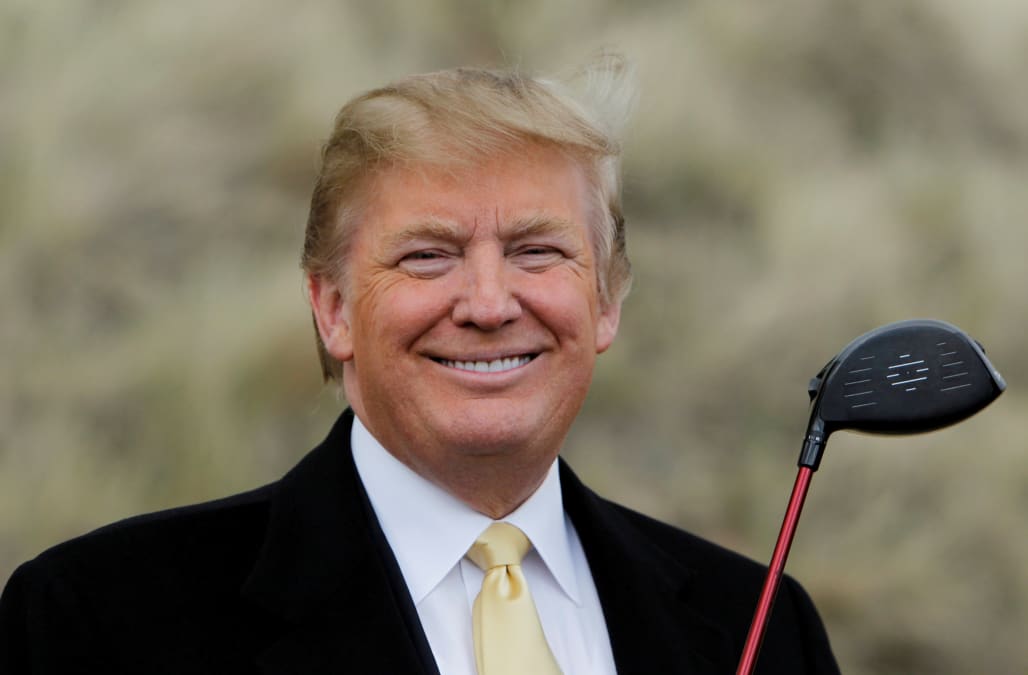 Though President Trump has been hit with criticism for the time he's spent on the green since taking office, he says he "couldn't care less" about golf.

Speaking with Fox News on Friday, Trump defended his recurring weekend travel, saying, "I am not going to play golf. I couldn't care less about golf."

Insisting he's not wasting taxpayer dollars, he went on to note that he has many properties and feels "a little guilty" going to the Trump Tower in New York because it's "very expensive for the country."

Trump noted that he works hard and he does not want the public to perceive him as "lazy."

Trump was critical of President Obama's time spent golfing during his time in the White House.

Every time Trump tweeted about Obama playing golf and basketball
President Obama should have gone to Louisiana days ago, instead of golfing. Too little, too late!
While our wonderful president was out playing golf all day, the TSA is falling apart, just like our government! Airports a total disaster!
"@YankeeRunnerLV:Can U trick Obama into appearing on @ApprenticeNBC by telling him Golf is involved so you can do Country a favor& FIRE HIM!
"@mooovin_on: No Bush, no Clinton, no RINOs, no golfing, no more handouts!! It's got to be @realDonaldTrump. Time for #Trump2016"
Obama has admitted that he spends his mornings watching @ESPN. Then he plays golf, fundraises & grants amnesty to illegals.
President Obama has a major meeting on the N.Y.C. Ebola outbreak, with people flying in from all over the country, but decided to play golf!
"@nikkio: DonaldTrump: Only way to get Obama to do right for our Marine would be for every country club across USA to deny him golf access
We pay for Obama's travel so he can fundraise millions so Democrats can run on lies. Then we pay for his golf.
Can you believe that,with all of the problems and difficulties facing the U.S., President Obama spent the day playing golf.Worse than Carter
Can you believe we still have not gotten our Marine out of Mexico. He sits in prison while our PRESIDENT plays golf and makes bad decisions!
"@Kalozap: Obama's mind, IsIs, ebola, etc.... and then thinking, boy I wish I was on the golf coarse. What should I wear on the Links"
If Obama resigns from office NOW, thereby doing a great service to the country—I will give him free lifetime golf at any one of my courses!
"@TheBigJamesG: What kind of president doesn't get playing golf after a cruel beheading isn't the thing to do? Detached from reality he is"
"@ __________IAN: "No one respects golf more than me, but there is a time and place for everything"- Mr.Trump hitting the nail on the head!"
"@BackOnTrackUSA: @realDonaldTrump While Obama vacations,golfs, attends parties & jazz concerts, ISIS is chopping heads off of journalists."
"@jeff_smith7: @realDonaldTrump Maybe Perry can put in a 9 hole golf course on the banks of the Rio Grande to lure Obama to see the border?"
President Obama played golf yesterday???
"@gretawire: PresObama is not busy talking to Congress about Syria..he is playing golf ...go figure"
My @foxandfriends interview discussing Pres. Obama playing golf w/@TigerWoods, US Airways-American merger & oil http://t.co/C868hkJf
Obama should play golf with Republicans & opponents rather than his small group of friends. That way maybe the terrible gridlock would end.
Too busy playing golf? @BarackObama sends form letters with an electronic signature to the parents of fallen SEALs http://t.co/ELKcqTyr
I don't mind that @BarackObama plays a lot of golf. I just wish he used it productively to make deals with Congress!
I play golf to relax. My company is in great shape. @BarackObama plays golf to escape work while America goes down the drain.
Yesterday @BarackObama actually spent a full day in Washington. He didn't campaign, fund raise or play golf. Shocking.
@BarackObama played golf yesterday. Now he heads to a 10 day vacation in Martha's Vineyard. Nice work ethic.
Obama must now FOCUS, get his mind off "March.Madness", and LEAD! Watch Russia closely, work hard on the economy and get rid of ObamaCare!
President Obama, be cool, be smart, be sharp and FOCUS (no more March Madness), and you can beat Putin at his own game. IT CAN BE DONE!
While Putin is scheming and beaming on how to take over the World, President Obama is watching March Madness (basketball)!
Why is Obama playing basketball today? That is why our country is in trouble!
Michelle Obama's weekend ski trip to Aspen makes it 16 times that Obamas have gone on vacation in 3 years. (cont) http://t.co/2SXcBxrJ
Up Next

However, the New York Times reports that he's been to his Mar-a-Lago resort 25 times. And, of the 31 days Trump has spent of his presidency visiting at least one of his properties, he's made 19 visits to his golf clubs.

Trump's visits to his Mar-a-Lago property could cost taxpayers around $20 million dollars for his first 80 days in office, according to a CNN report.