TRUMP: I'm 'disappointed' in how Republicans have handled big issues so far 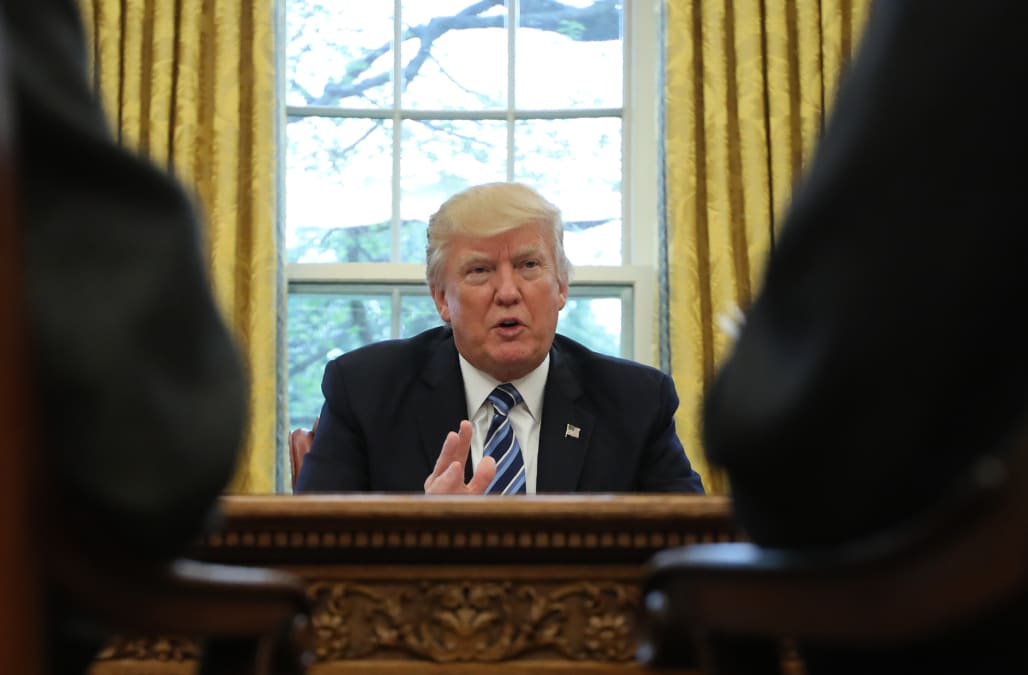 President Donald Trump, in an interview released Friday, suggested he was "disappointed" with how the Republican-controlled Congress has handled big issues like healthcare during his administration.

In an interview with Fox News' Martha MacCallum, Trump said he was "disappointed" that Congress had not handled what MacCallum called the "big issues" during the president's first 100 days in office.

"I'm disappointed that it doesn't go quicker," Trump said about the legislative process, according to excerpts of the interview released Friday.

But Trump touted the relationships he had made with some of the lawmakers.

Trump says he 'thought it would be easier' to be president
FEEL FREE TO RESIGN, DUDE https://t.co/6CrFA37KGP
I loved my previous POTUS. Living in constant fear that a petulant boy king may start WW3 with a tweet is hard. I t… https://t.co/dWYxZGSef5
How is this real? https://t.co/FlMwd1l52W https://t.co/jwp3YdDJpP
Trump doesn't say it directly, but interview gives window into how isolated he is in the White House. https://t.co/RpZM5MWG7c
@GQMagazine @realDonaldTrump just because @POTUS44 made it look easy doesnt mean its easy!
@GQMagazine @drewmagary @realDonaldTrump Sad Hillary Clinton admits she thought not being President is harder than this.
Trump said "he Thought being president would be easier." I guess it looked easy on TV. Just like everything so far, he thought it was easier
So the next time a conservative says anything about Hillary Clinton remind them of this. Let them know she is not u… https://t.co/WvWqL9S3NJ
@nytimes https://t.co/gG8nZS4fR8
@nytimes https://t.co/BFcqcs8jeJ
@nytimes Who knew being president would be hard work. Only everyone on the f---king planet!!!!!!
@nytimes *['work' by Rhianna plays in headphones]* https://t.co/eobDy7COGT
@Reuters I have read this quote at least 20 times and am equally shocked to the core each time I read it! SMFH!
President Bobby Newport says country is being a jerk
Bobby Newport has never had a REAL job in his LIFE https://t.co/YpwNTXTWsX
Jesus, watching Parks & Recreation Series 4 again: Bobby Newport is *basically* Donald Trump! https://t.co/2XFxdWnsQJ
Up Next

"I have great relationships, don't forget most of them I didn't even know," Trump told MacCallum. "But many of them like the Freedom Caucus came and I see them all the time, we love our President, we're doing this for our president. You look at that, you look at the moderates, it's the same thing. I'm disappointed."

Republicans currently hold majorities in both the House and Senate.

Republicans' biggest push during the Trump administration has come in trying to repeal and replace the Affordable Care Act, the law better known as Obamacare. The bill they put forward, the American Health Care Act, did not make it through the House after disagreements within the GOP conference forced the leadership to yank the bill minutes before a vote was scheduled.

Attempts at bringing the bill back to the floor have so far failed.

Despite the struggles on healthcare, Trump praised the work of House Speaker Paul Ryan.

NOW WATCH: Watch Trump walk out of an executive-order signing ceremony without signing any orders