Inflatable dummy tanks were a critical tactic in battlefield deception

Inflatable 'dummy tanks' used in early war
UNITED KINGDOM - CIRCA 1939: World War II. Rubber tank (decoy) in England. (Photo by Roger Viollet/Getty Images)
A dummy tank made of reeds is used as a decoy to draw the bombs of Allied aviators during World War I. (Photo by ï¿½ CORBIS/Corbis via Getty Images)
A soldier of the 104th Inf, Div, 1St US, Army, examines a dummy tank constructed with wood found, during the driving east to take Cologne (Germany), March 1945. (Photo by Photo12/UIG/Getty Images)
(GERMANY OUT) Gernan Reich, military, Reichswehr:pushing a dummy tank about 1931 (Photo by ullstein bild/ullstein bild via Getty Images)
(GERMANY OUT) German Reich, Military, Reichswehr: Military exercises near Frankfurt/Oder: Dummy Tank crossing the river Oder on a pontoon ferry of the engineer troops. September 1932 (Photo by ullstein bild/ullstein bild via Getty Images)
GERMANY - OCTOBER 21: Propaganda: Dummy of a tank in front of the Reichstag in Berlin. The exhibition 'The front line' takes place in Berlin. (House of Europe). Photograph. October 21st 1932. (Photo by Imagno/Getty Images)
UNSPECIFIED - SEPTEMBER 09: At a maneuvre at Uckermark tank mocks made of cardboard were used, Photograph, Sept, 9th 1928 (Photo by Imagno/Getty Images) [Bei einem Man?ver in der Uckermark wurden Panzerattrappen aus Pappe verwendet, Photographie, 9, September 1928]
circa 1925: Two dummy tanks being pushed along a road by German soldiers. (Photo by Hulton Archive/Getty Images)
A U.S. marine soldier rips a board from a wooden replica of a tank used by the Japanese on Okinawa to attract American fire toward the dummy rather than the real thing. April-July 1945. (Photo by ï¿½ CORBIS/Corbis via Getty Images)
Up Next

From their first use on the Western Front in 1916, heavily armed and armored tanks could sway the outcome of a battle with their presence. As such, armies quickly developed techniques to confuse enemies about the location and number of their tanks.

In the later years of World War I, the Allies built wood-and-cloth replicas of British tanks, hauling them into position with horses and using them to draw German fire away from their real tanks.

The uses and permutations of dummy tanks grew rapidly in the interwar years, with Germany in particular using hand-pushed and car-mounted dummy versions for training exercises. 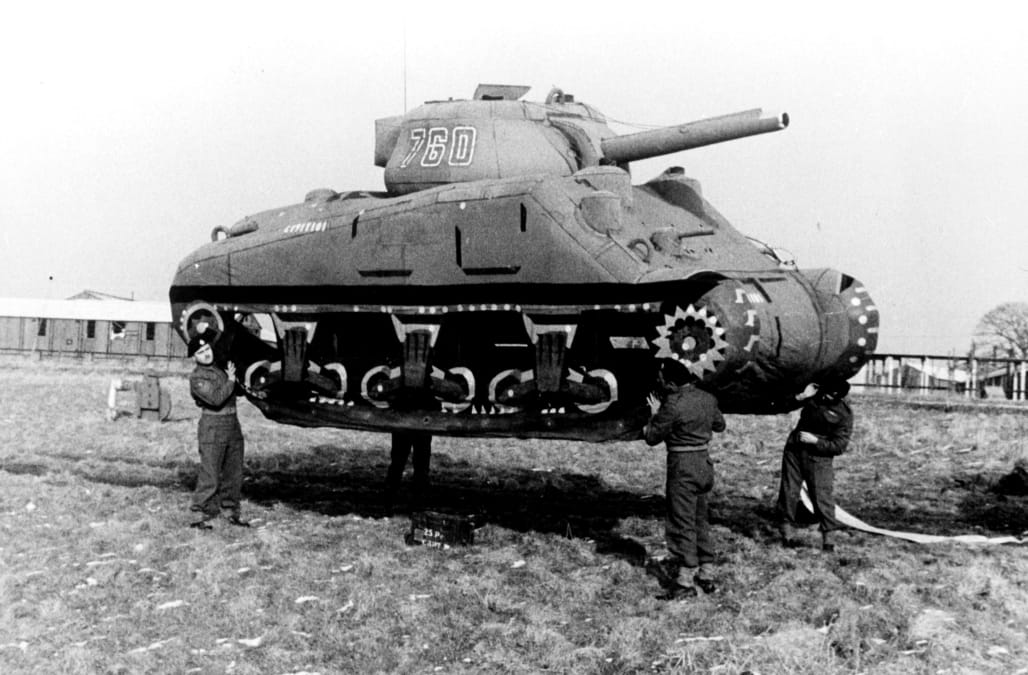