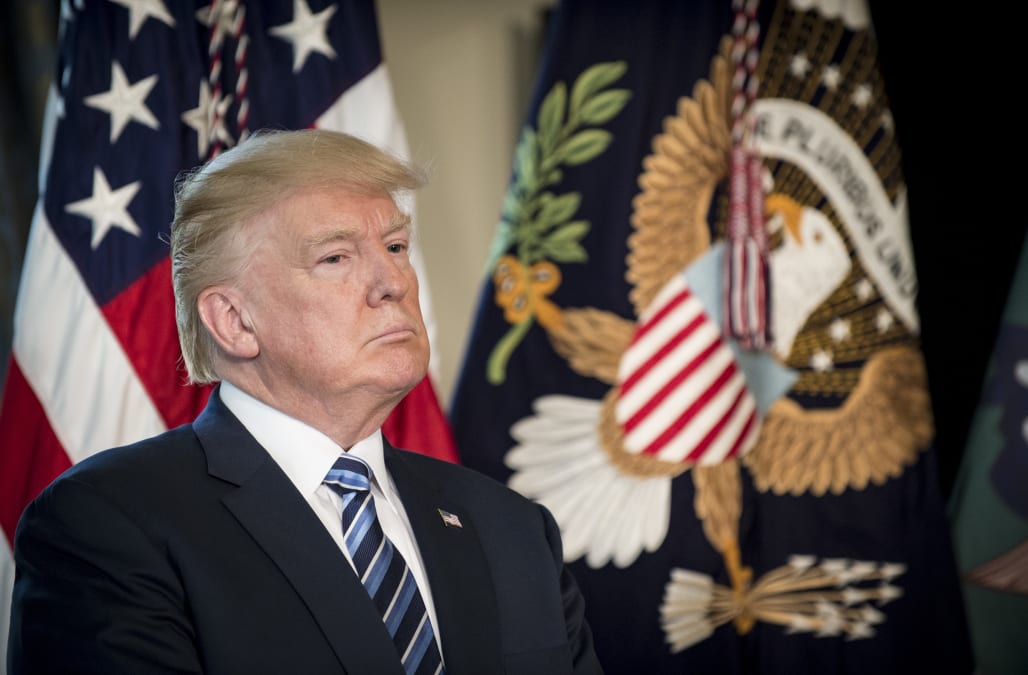 President Donald Trump's administration unveiled a tax plan on Wednesday that proposes lower taxes across the board and a number of alterations to the tax code.

One proposal in the plan is the repeal of the so-called alternative minimum tax. The decades-old tax, which was enacted to make sure the rich pay their fair share, cost Trump $31 million in 2005.

As Business Insider's Jim Edwards reported, that "accounted for most of the $38.5 million in taxes" the president paid in 2005.

What is the alternative minimum tax?

The original purpose of the AMT was to prevent very wealthy Americans from using deductions and loopholes to skimp on their taxes.

One way to look at it is as a secondary tax code. The AMT has a set of rates and rules that are distinct from the regular tax code and apply to certain high-income earners, trusts, estates, and corporations.

So when corporations or individuals fall under the auspices of the AMT, their tax bills are figured out differently than those of ordinary taxpayers.

The point of the AMT is to make sure wealthy Americans who earn above a certain amount pay a flat minimum tax rate — hence the name — even if they could get away with paying zero or very little taxes in the regular system. But many opponents of the tax say it now targets people in the upper-middle class, not the uber-rich.

Trump's first full day in office was marked with a combative statement from White House Press Secretary Sean Spicer who chided the media for "shameful" reporting about the crowd size at the Inauguration. The impromptu statement, Spicer's first appearance in front of reporters in his new role, set the tone for the administration's antagonistic relationship with the press during the opening days of the new presidency.

Photos showed crowds much smaller than the turnout for President Barack Obama's Inauguration in 2009, though Spicer claimed Trump's swearing in saw "the largest audience to ever witness an inauguration, period, both in person and around the globe."

Kellyanne Conway, a senior adviser to Trump, told NBC News' Chuck Todd that Spicer presented "alternative facts" during his statement about the Inauguration crowd size. "You're saying it's a falsehood. And they're giving — Sean Spicer, our press secretary — gave alternative facts," she said in an interview on "Meet The Press."

"Alternative facts are not facts, they're falsehoods," Todd responded.

The term quickly went viral and became a catchphrase for the administration's spin on seemingly negative news stories. Conway later defined the term as "additional facts and alternative information."

Trump spent the first 10 minutes of a bipartisan meeting with congressional leaders lamenting the millions of "illegal" voters that prevented him from winning the popular vote. The debunked claim, which Trump first made after his election victory last November, came as a surprise to lawmakers visiting the White House for an introduction to the new president. Trump won a commanding 304 electoral votes but received about 3 million fewer total votes nationwide than Democrat Hillary Clinton. He attributed the gap to unfounded claims of "illegals" voting.

Trump's directive to temporarily suspend refugees from seven Muslim-majority countries from entering the U.S. sparked widespread protests and confusion at airports around the country and the world. Some refugees and immigrants, including those with green cards, were barred from entering the country as officials struggled to make sense of the order. Protesters gathered at airports around the nation to voice their opposition to the ban. Federal judges later blocked the order, leading the administration to revise and re-sign it weeks later.

Trump's chief political strategist Steve Bannon was given a seat on the "principles committee" of the National Security Council, a position normally reserved for generals. The chair of the Joint Chiefs of Staff and the director of national intelligence were downgraded as a result. Bannon would later be removed from the NSC on April 5, with those two positions being added back along with Secretary of Energy and former Texas governor Rick Perry.

Top adviser Conway became a punchline for citing the "Bowling Green massacre" when sticking up for Trump's immigration order. Though no such massacre took place, Conway said she meant to refer to terrorists discovered living in Bowling Green, Kentucky.

The president questioned the legitimacy of a federal judge who temporarily halted his immigration order. "The opinion of this so-called judge, which essentially takes law-enforcement away from our country, is ridiculous and will be overturned!" Trump tweeted.

Flynn abruptly resigned Feb. 13 after misleading Vice President Mike Pence and other senior White House officials about his communications with the Russian ambassador to the United States. Flynn admitted to giving Pence "incomplete information" about a phone call in which he and the Russian official discussed U.S. sanctions against Moscow after the election. The VP had defended Flynn in television interviews, claiming the retired Army lieutenant general did not speak with Ambassador Sergey Kislyak about the sanctions that President Obama had imposed in response to Russian meddling in the presidential election. The Justice Department informed the White House about Flynn's communication on Jan. 26, but Pence was not made aware until Feb. 9, White House press secretary Sean Spicer said.

Andy Puzder, the head of CKE Restaurants, withdrew his nomination to head the Labor Department after coming under scrutiny from senators on both sides of the aisle. It's not uncommon for presidents to fail to get all their top choices confirmed to the Cabinet, but Trump's appointments have come at a glacial pace.

The Trump administration reversed the Obama administration's guidance to public schools that allowed transgender students to use the bathroom of their choice. The move was met by outrage from advocates of the LGBTQ community.

Attorney General Jeff Sessions announced he would recuse himself from any investigation into Russian interference with the U.S. presidential election. The new attorney general had come under scrutiny after it was revealed he met with the Russian ambassador to the U.S. during the 2016 campaign. Sessions, a top surrogate during Trump's campaign, did not disclose the meeting during his Senate confirmation hearings. Sessions said he did nothing improper but sought to avoid the perception of a conflict.

The president set off a political firestorm by tweeting out the explosive claim that Obama conducted surveillance on Trump Tower during his 2016 run. Trump has not backed down from the accusation, though the White House has yet to present proof of what the president meant. Rep. Devin Nunes, the chair of the House Intelligence Committee, came under fire for claiming to have seen evidence that could support Trump's claims. He later recused himself from the probe after members on both sides of the aisle questioned his impartiality. FBI Director James Comey refuted Trump's claim while testifying to Congress.

The Trump administration unveiled a second edition of the controversial travel ban. The new ban removed Iraq from the list of countries impacted and does not affect those who currently have green cards. However, the revised ban was also blocked by federal judges.

Trump repeatedly knocked German leader Angela Merkel on the campaign trail, setting up what amounted to an awkward first visit to Washington. After an uncomfortable photo-op in the Oval Office, the two leaders further displayed their frosty relationship in a joint press conference. The crowning moment came when Trump received a question about his wiretapping accusations against Obama. "At least we have something in common, perhaps," Trump responded, referencing U.S. efforts under Obama to monitor Merkel revealed in documents made public by Edward Snowden.

After a White House-backed plan to replace Obamacare failed in Congress, Trump knocked the House Freedom Caucus in a tweet. The group is comprised of some of the most conservative members and was largely expected to be among Trump's top supporters when he entered office. But their objections to provisions in the Republican healthcare plan ultimately doomed the legislation and Trump warned "we must fight them, & Dems" in the midterm elections.

Trump took unprompted shots at former national security adviser Susan Rice in an interview with The New York Times that was meant to be focused on infrastructure. He suggested Rice committed a crime by attempting to uncover the identities of Trump aides whose communications had been collected by intelligence agencies. "I think the Susan Rice thing is a massive story. I think it's a massive, massive story. All over the world," Trump told The Times.

The Trump administration announced an end to the public release of the names of White House visitors that began under President Barack Obama. The administration attributed the change in policy to "the grave national security risks and privacy concerns" and said that the Obama administration had only selectively released names anyway.

Darren Staples/ReutersThe AMT originated in the late 1960s. The Department of the Treasury said that about 150 people legally paid zero federal income tax in 1966 by claiming deductions "and not including certain kinds of income." Naturally, taxpayers of modest means were ticked off about this.

According to Forbes, Congress received more complaints about those "tax-dodgers" than it did about the Vietnam War. So it responded by enacting the minimum tax, the AMT's predecessor, in 1969. The current version of the AMT was implemented in 1982. Since then, it has received several touch-ups.

Today, however, the AMT, doesn't strictly apply to superrich Americans, as it was originally intended. Since the AMT wasn't indexed for inflation until 2013, the number of people who fall under the AMT umbrella has increased significantly since the 1970s and includes "30 percent of households with cash income between $200,000 and $500,000," according to figures from the Urban-Brookings Tax Policy Center cited by Bloomberg. In total, it applied to 3% of all taxpayers in 2005, according to data from the IRS.

Most critics of the AMT oppose the tax because it doesn't target the people and organizations it was originally aimed at.

Daniel Shaviro is a professor at the New York University School of Law, and he knows a thing or two about the AMT — he played a role in changing the tax in the 1980s.

He told Business Insider that the law in its current form "doesn't address [today's] tax-avoidance methods."

"It does not address sophisticated modern tax-avoidance techniques, such as Larry Ellison, who is worth $50 billion, getting a $1 salary and borrowing against the value of his appreciated stock, or companies such as Apple directing their global profits to tax-haven subsidiaries," Shaviro added.

Trump proposal to repeal the AMT would cost the fedeal government $412.8 billion, according to the Tax Policy Center. The president has said he would make up for that cost by reducing the number of deductions in the tax code.

NOW WATCH: Animated map of what Earth would look like if all the ice melted

More from Business Insider:
Mnuchin says Trump 'has no intentions' to release his tax returns
Procrastinating on filing taxes may be hurting the US economy
Trump says his 'massive' tax plan is coming next week