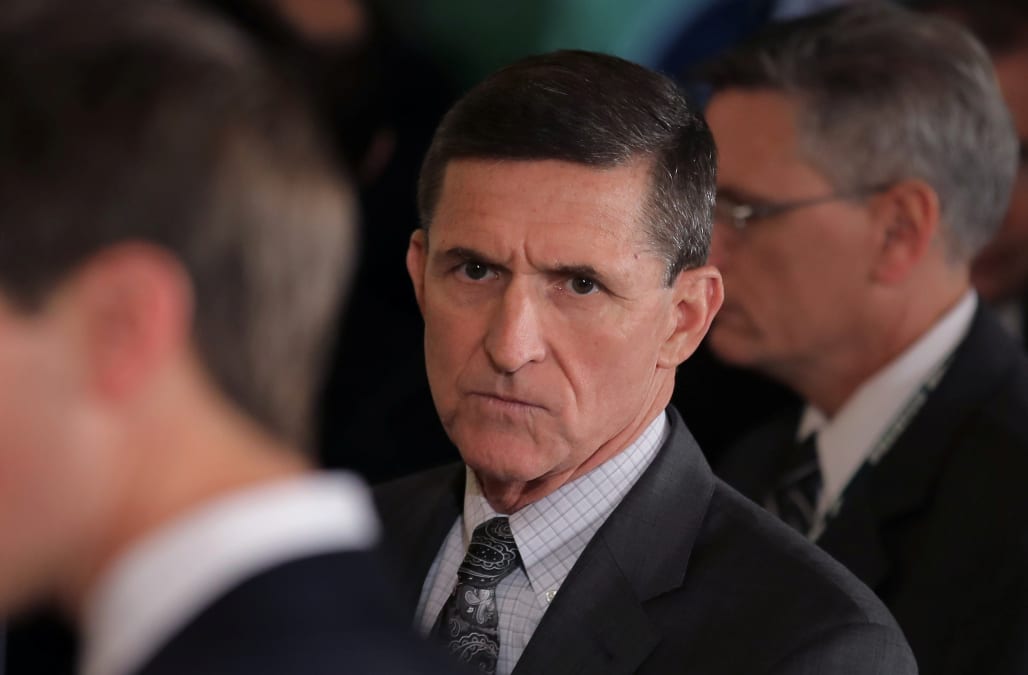 The House Oversight Committee's top-ranking Republican and Democrat said in a joint press conference on Tuesday that former national security adviser Michael Flynn appears to have broken the law by not disclosing payments he received from Russia in his 2016 security clearance application.

Republican Rep. Jason Chaffetz, the committee's chair, and ranking Democratic member Elijah Cummings told reporters that they had obtained the SF86 security clearance application form that Flynn filed in January 2016, one month after he traveled to Moscow to speak at a gala celebrating the 10th anniversary of Russia's state-owned news agency, Russia Today.

Documents the committee obtained later from Flynn's speaking bureau revealed that Flynn was paid approximately $33,000 for the speaking engagement. But they said he appears not to have disclosed those funds on his security clearance application.

Chaffetz also said Flynn, a former military officer who headed the Defense Intelligence Agency between 2012 and 2014, did not appear to obtain permission from his superiors before he traveled to Moscow.

"There is no data to support the notion that Flynn complied with the law," Chaffetz said. "He was supposed to seek and receive permission from the secretary of state and the Army secretary both to receive that payment and engage in that kind of activity."

"The response we're getting [from the Pentagon] is that there is no information on Flynn's trips or payments [on his SF86 form] and that, we believe, is the potential violation," Chaffetz said. "No former military officer is allowed to accept payments from a foreign government, and my guess is this is probably not the first time this has happened."

Chaffetz and Cummings held the press conference after being briefed on classified documents the Oversight Committee had requested from the Defense Department related to Flynn's lobbying work, as well as whether he properly disclosed payments he received from foreign entities.

Cummings said the committee had asked the White House, where Flynn served as President Donald Trump's national security adviser for just less than a month, for more information about his financial disclosures.

But the Trump administration had so far "refused to provide the committee with a single piece of paper in response to our bipartisan request," Cummings said, "and that is unacceptable."

In a letter to the Oversight Committee dated April 19, 2017, White House Director of Legislative Affairs Marc Short referred the committee to the Defense Department for the documents related to Flynn's security clearance and "contacts with foreign nationals" that predated his time at the White House.

Short wrote that the White House would be "unable to accommodate" the committee's requests for information about Flynn's contacts with foreign nationals after he was appointed national security adviser. Short said much of that information is classified.

Flynn was forced to step down from his position after only 24 days amid revelations that he misled Vice President Mike Pence about his conversations with Russia's ambassador to the US, Sergey Kislyak. Flynn's contact with Kislyak and other foreign nationals is being investigated by the House Intelligence Committee, which Chaffetz said would be taking the lead on examining whether those contacts themselves were inappropriate.

Flynn agreed to testify before the intelligence committees in exchange for immunity late last month, a signal to some legal experts that he thought he may have committed a crime.

Cummings said that while Flynn's negligence on his SF86 forms could "definitely" be punished by up to five years in prison, it is not up to the Oversight Committee to make that decision.

Documents obtained later by the House Oversight Committee revealed that Flynn was paid $11,250 by Russia's top cybersecurity firm, Kaspersky, and another $11,250 by the Russian charter cargo airline Volga-Dnepr Airlines, for two speaking engagements in 2015.

Flynn belatedly registered as a foreign agent with the Department of Justice in March for his lobbying work last year on behalf of a Turkish businessman with ties to the Turkish government. Flynn's firm, Flynn Intel Group, was paid approximately $500,000 by the businessman, Ekim Alptekin, between August and November of 2016.

NOW WATCH: Russia jailed the man who may become Putin's biggest challenger in the next election