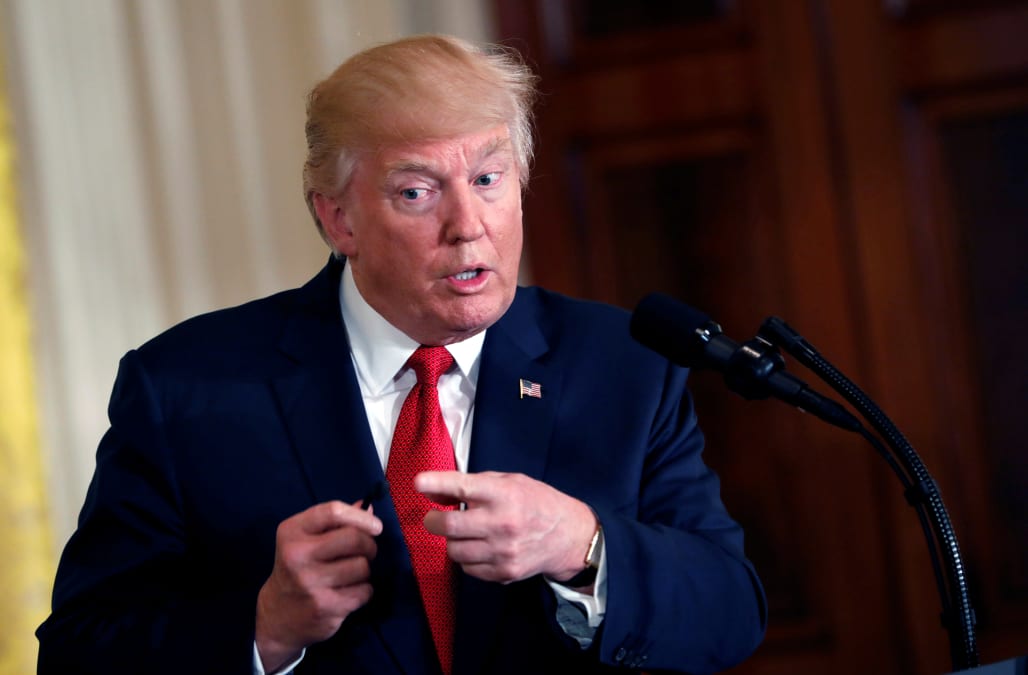 Amid backlash, a group of psychiatrists claimed on Thursday at a conference at Yale University that President Donald Trump has a "dangerous mental illness" and is not fit to be president of the United States.

According to The Independent, over thirty mental health experts, all of whom have never personally examined President Trump, say they have an "ethical responsibility to warn the public about Donald Trump's dangerous mental illness."

Dr. John Gartner, a practicing psychotherapist and former advisor to psychiatric residents at Johns Hopkins University Medical School, said during the conference that the president is "paranoid and delusional."

This is Trump's senior picture, from the New York Military Academy's 1964 yearbook.

That year, Trump was voted the "Ladies Man" of his class in a "popularity poll."

Here's Trump in his military attire.

Here stands Trump with the rest of his class. He's 11 over from the right in the bottom row, front and center.

Trump claims he was quite an athlete earlier in life. Here he is as a member of the 1964 New York Military Academy's varsity soccer team.

Soccer wasn't Trump's only athletic forte that year. Here he is with his fellow intramural bowling team staffers, second from the right.

And here he is with the intramural basketball team, at center.

He was also a captain on the varsity baseball team. (He's sitting fourth from the left on the bottom row.) In 1964, Trump's squad went 5-6-1, with the tie coming in the team's final game of the season.

The group of mental health experts has drawn criticism from both sides of the political aisle, along with others from within the psychology field, for violating the American Psychiatric Association's "Goldwater rule," which says no mental health professional should attempt to diagnose or give professional opinions on someone without having personally examined them.

"Worse than just being a liar or a narcissist, in addition, he is paranoid, delusional and grandiose thinking and he proved that to the country the first day he was President. If Donald Trump really believes he had the largest crowd size in history, that's delusional," said Dr. Gartner, who is also a founder of Duty to Warn, an organization of mental health professionals who feel Trump is unfit to be president.

During the conference, Psychiatrist and New York University professor James Gilligan said based on his experience working with "murderers and rapists" he can "recognize dangerousness from a mile away."

"You don't have to be an expert on dangerousness or spend fifty years studying it like I have in order to know how dangerous this man is," said Gillian.

Earlier in the year, Dr. Gartner created an online petition calling for mental health professionals to "declare Trump is mentally ill and must be removed." The change.org petition currently has 8,065 signatures.

Connecticut Republican Party Chairman J.R. Romano responded to the convention calling Trump mentally ill by saying, "This is a sad day. These so called professionals have thrown ethical standards out the window because they cannot accept the election results."

In response to criticism over his long-distance diagnosis of President Trump, Dr. Gartner said: "This notion that you need to personally interview someone to form a diagnosis actually doesn't make a whole lotta sense."

"For one thing, research shows that the psychiatric interview is the least statistical reliable way to make a diagnosis."

"The panel at Yale School of Medicine abided by 'the Goldwater rule.' Eminent psychiatrists were invited to speak about whether there are other ethical rules that override it, as in ordinary practice. The organizer, Dr. Bandy Lee, agrees with the Goldwater rule, although she is troubled by its recent expansion (as of March 16, 2017) and the silencing of debate. She hopes that the public and politicians will understand that mental health issues are not to be used as a weapon. Psychologist Dr. John Gartner was invited as an activist but was not on the actual panel. The organizer emphasizes that the event was independent and did not represent the views of Yale University or Yale School of Medicine."

UPDATE: This post has been edited to reflect that Dr. John Gartner is no longer affiliated with Johns Hopkins University.

More from AOL.com:
The top Democrats who could challenge Trump in 2020
Thousands at New York rally demand Trump release tax returns
Poll: Majority of Americans disapprove of President Trump, a near historic low