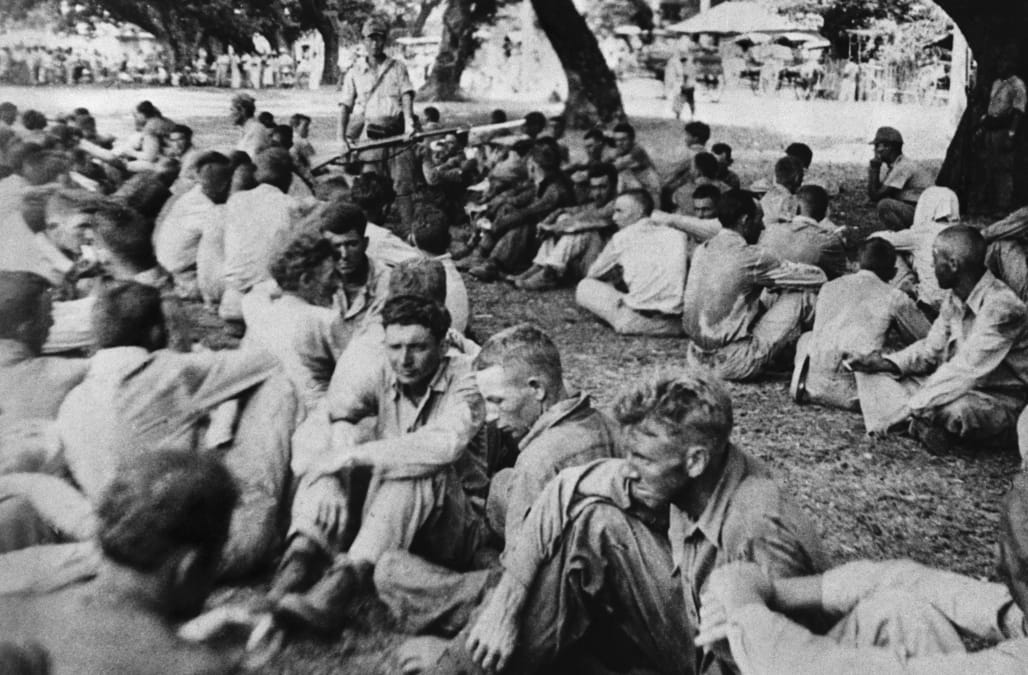 After the surprise attack on the US fleet at Pearl Harbor on December 7, 1941, Japan turned its focus to elsewhere, sweeping through the Pacific.

In early January, Japanese forces landed in the Philippines, US territory where tens of thousands of American and Filipino soldiers were stationed.

Allied forces put up a fight for 99 days, but Japanese pressure, plus a lack of supplies and illness, wore them down, and the 76,000 troops who surrendered — more than 20,000 Americans among them — on April 9, 1942, was the largest army under US command to ever surrender.

What followed was one of the most well-known atrocities of World War II: The Bataan Death March, when thousands of Filipinos and Americans died during a forced march to a collection point.

Japan's unpreparedness for the sheer number of soldiers who surrendered, coupled with disdain for surrendering troops and general frustration on the part of Japanese troops, led to shocking brutality during the march.

Many of those forced to walk over 60 miles to a prison camp suffered in the tropical heat, which exacerbated war wounds and illnesses. Stragglers, prisoners who broke ranks, or those who fell behind were bayoneted, shot, and, in some cases, beheaded. Japanese soldiers overseeing the march beat their captives mercilessly.

After the war, Japanese Lt. Gen. Homma Masaharu, who led the invasion, was charged with responsibility for abuses at Camp O'Donnell by a military commission in Manila. He was executed by firing squad on April 3, 1946.

The photos below give some idea of the horrors endured by the prisoners of war forced to make the days long march.

The Bataan Death March
American and Filipino forces held out for 99 days, but the Japanese had anticipated a much longer resistance. An April 9 attack on the Bataan Peninsula cracked Allied resolve, and tens of thousands of soldiers surrendered to the Japanese.

In this photo, Japanese troops guard American and Filipino prisoners in Bataan in the Philippines after their capture of the Bataan Peninsula on 9th April 1942.

"They called them the 'battling bastards of Bataan,' and they fought until they literally had no food, no ammunition," Mike Vigil, whose father was a coastal artilleryman in the Philippines, told Business Insider.

In this photo, General Masaharu Homma, the 'Poet General', on an inspection tour of his Philippine command. Homma was later blamed and executed for the Bataan Death March.

Starting on April 10 from Mariveles, on the southern end of the Bataan Peninsula, 70,000 POWs were force-marched to Camp O'Donnell, a new prison camp 65 miles away.

In this photo, thousands of American prisoners are force-marched 55 miles from Bataan to a train that would take them to internment camps in the Philippines.

The Japanese, who did not want POWs around as they prepared to assault the island fortress on Corregidor, had no evacuation plans for the huge number of surrenderees. They wanted to concentrate them elsewhere, but had few vehicles and Bataan had no rail lines.

In this photo, Japanese troops patrol a hillside in the Philippines.

"My father didn't talk a lot about it, but he tells about carrying sick servicemen, fellow soldiers, because they couldn't walk," Vigil said. "A lot of them were already suffering from malaria and dysentery, and he talks about the fact that if anybody fell by the road or faltered, the Japanese would come and shoot them or bayonet them."

In this photo, prisoners have their hands tied behind their backs.

Prisoners who couldn't rise in the morning during the multi-day march were often executed — buried alive or beaten to death. Other prisoners were forced to dig graves for their comrades. Japanese troops added to the horrors with random acts of brutality along the way.

In this photo, one of many captured by the Filipinos from the Japanese, Americans are shown (Americans seated, Japanese guards standing) just before the 'Death March.'

The Japanese, who didn't expect so many troops to surrender, had made no preparations for US and Filipino soldiers' poor health, nor had Japanese forces made allowances for how long it would take their captives to cover the ground between the battlefield and the camp that would house them. The resulting poor conditions took a deadly toll on the prisoners.

In this photo, Filipino and American prisoners of war are being marched from Mariveles to San Fernando. This march was named the Bataan Death March because of the high number of brutal and gruesome deaths along the road at the hands of the Japanese.

After the first part of the March, the prisoners were loaded into box cars — up to 100 men stuffed into cars meant for 40. Hundreds died in the stifling conditions. Another, short march followed, and then Americans and Filipinos were locked up at Camp O'Donnell, a former Philippine army training area.

In this photo, Filipino and American prisoners of war are being marched from Mariveles to San Fernando.

In this photo, an American soldier and a war correspondent push back the overgrown weeds to reveal grude wooden crosses which mark the resting place of American heroes who died at Camp O'Donnell.

Thousands of US troops taken prisoner were sent to Japan, where they were held under harsh conditions and forced to work for Japanese companies. They made the trip packed on "hell ships" — decrepit fishing vessels — some of which were sunk by Allied forces during the journey, Vigil said.

In this photo, American soldiers are lying down at the beginning of what became the Bataan Death March.

"They put them on the hell ships. They were in the holds. They had no oxygen," Vigil said. "The Japanese would lower buckets of rice or food ... and the men were dying so they'd fight for the rice or the water. Most of it was spilled."

In this photo, General Douglas MacArthur looks down on dead Japanese soldiers after a fierce battle on Bataan.

"My father recalls the stench was unbearable because they had no toilet facilities," Vigil said. "And men were dying so they would just put the bodies up and the Japanese would put ropes on them and then drag them out of the hold, basically throw them overboard."

In this photo, General Masaharu Homma, the 'Poet General', on a pier in the Philippines.

SEE ALSO: 72 years since the Battle for Remagen — 8 photos of the Allies' first toehold in the Nazi heartland

More from Business Insider:
US Marines in Japan are pushing the F-35 to the limit
4 crucial words from Mike Pence have put the US in a tough position against North Korea
An alt-right publisher is being sued over allegations he helped create a 'troll storm' that targeted a Jewish woman